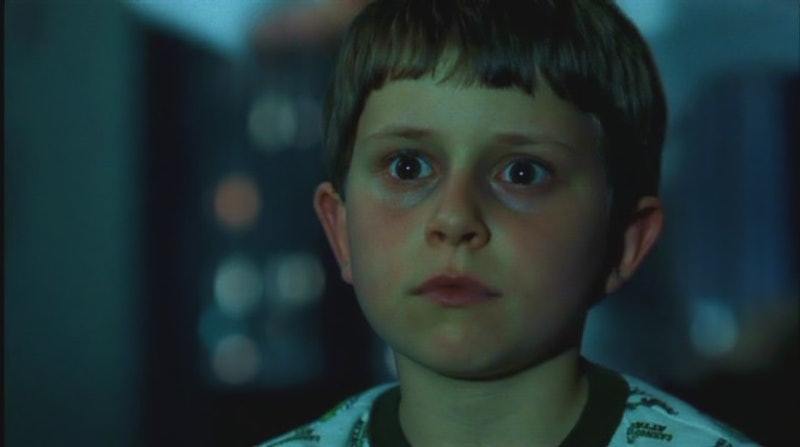 I credit The Ring with being the last movie that gave me nightmares. I was never so happy that I wasn't allowed to have a TV in my room than immediately after seeing the Gore Verbinski horror flick. (A demon videotape couldn't automatically start playing at 3 a.m. if you didn't have a TV... right?!) Sure, most people credit Samara, the evil little girl inside the television screen, as the reason why the film was so freakin' scary, but I was just as freaked out by little kid Aidan — and he was our hero! Aidan may have been the good guy in the story, but his premonitions and tendency to ask questions about death made him one kid I'd rather avoid on the playground. (It didn't exactly help that, in the sequel, his body was possessed by Samara.) The actor who played Aidan in The Ring will forever be associated with that creepy role, but he's definitely moved on from his TV-staring days.

David Dorfman, who played Aidan in both the original horror film and its sequel, has been busy these past 10 years, and you may be surprised to learn what he's been up to. Here's what actor Dorfman has been doing since scaring us silly.

...at age 13. Yep. According to Business InsideerDorfman (who looks adorable and not at all creepy in this throwback photo) was admitted to the university when he was barely old enough to attend high school, let alone college.

He Worked In Film

In between The Ring and The Ring Two, Dorfman had a role in The Texas Chainsaw Massacre as yet another creepy kid. Later he starred in the TV movie adaptation of A Wrinkle In Time and had a role in musical comedy The Singing Detective. His biggest film after The Ring was in 2008, when he starred the Owen Wilson comedy Drillbit Taylor, about kids who hire a soldier to protect them from a school bully.

Dorfman had a role on Joan of Arcadia from 2003 to 2005, as well as a guest stint on Ghost Whisperer in 2006. In 2010 he starred on Zombie Roadkill, a FEARnet horror-comedy web series. Guess he really can't escape the scary stuff.

He Graduated From UCLA

...at age 17. As valedictorian. My teenage years were nothing.

He Gave Back To His Community

According to Dorfman's interview with Business Insider, he gave back to the community by organizing improv workshops for inner city youth, which he did throughout his college career. You know, the one that ended when he was 17.

He Studied At Harvard Law School

What, like it's hard? Apparently not for Dorfman, as Business Insider reported that in 2014, he was a 21-year-old third year law student working on three different law journals while making time to serve on student government. I cannot even.

So what does Dorfman look like today? I scoured the internet for a single modern photo of him, but it seems that this guy really did leave life in the public eye behind. The last recent photo is from 2010's Zombie Roadkill — and it proves he really did grow up. Check it out:

Cute in a completely non-creepy way and brilliant? Some former child stars have all the luck.