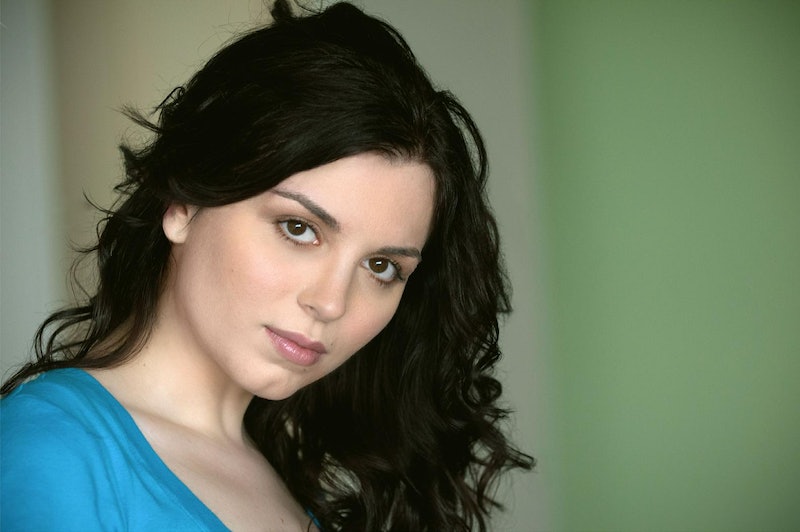 What do you do with your life if you’re a bisexual woman who is the daughter of a gay dad and a lesbian mom? Become a comic and appear on Last Comic Standing, the E! network, and at Pride events across the country, of course. At least, that’s what comic Kaitlin Colombo did. Since the age of 13, she’s been performing standup, and now, she’s working on the production of a new touring burlesque show, “GLITORIS!”, whose proceeds will benefit LGBTQI charities across the country. As a queer trans woman who has just begun to dabble in the world of standup, and as an advocate for LGBTQI issues, I was excited to get the chance to talk with her and interview her for Bustle.

Comedy, like any part of the entertainment industry, is extremely difficult to break into successfully, but Kaitlin’s been doing it since a very young age. In fact, she’s the youngest person to ever perform on the MainStage of the Hollywood improv. Because she’s been active in comedy since childhood, I thought her perspective on breaking into comedy, especially as a woman, would be an insightful one. I asked her how she got started doing standup, and found that her answer resonated strongly with me.

“The fact that I had to defend myself from the get-go was the best training I got — not only as a comedian, but as a woman," she says. "It’s actually just a daily trudge of justifying to those around you why you have an opinion and why it should be listened to."

For me, it was similar. As soon as I was visible as a trans woman, I was constantly having to justify not only who I was, but why my voice deserved consideration. For a while, I was angry about this, but as I began to see how absurd the hatred directed towards me was, I was able to transform it into comedy, and find a platform for my voice. My first standup set was, in large part, a deconstruction of the parts of my identity that I was constantly expected to justify, and the harmful stereotypes that our society weaponizes against transgender women. I'm still very new to the world of standup comedy, and while I don't see it as a career path, I feel very blessed to have been able to have a platform to say the things that I wanted to say while receiving a warm response.

Unfortunately, access to that platform, in comedy as in many other areas of our society, is not always equally granted to women. Although she believes that there is cause for optimism in terms of representation, Kaitlin says that comedy is still very much a boys club. Just 25 percent of the comics that she sees performing any given night are women.

This being the case, why are women not encouraging each other to do standup? The lack of opportunities for female comics in a space that remains male-dominated would, intuitively, be reason for female comics to elevate and support each other. I was surprised to learn that regrettably, this is not often how it actually plays out. Instead, this fierce competition often leads to women tearing each other down to prop themselves up.

“I realized … there is a belief in the world of entertainment that success is a zero-sum game — If you get something, I don’t,” she says. "And when there are so few opportunities afforded to female entertainers — particularly female comics — you fight tooth and nail to get the meager scraps you’re thrown.”

As I learned more about Kaitlin’s history and her experiences in comedy, I noted how a lot of the problems she had experienced mirrored those that women face regardless of their occupation. Men didn't take her seriously, asking her if her father or boyfriend wrote her material. She received sexist and degrading comments from strangers. Even when dealing with other women, the female competitiveness that Kaitlin mentioned mirrored the competitiveness among women in larger patriarchal society, where they are often are pressured to be in competition with one another in all facets of life, rather than target the systems of oppression that keep them all from attaining success. Although I was dismayed to hear that the world of comedy often reflects these and other unfavorable aspects of our society, I found Kaitlin's persistence admirable. I knew that she had to have a true passion for what she was doing. Any woman would.

I was curious to know how Kaitlin felt about the relationship between comedy and activism, and how she viewed jokes made at the expense of people in marginalized groups. Although I firmly believed in comedy’s power to challenge toxic ideas in society, and that belief drew me to standup, I also had an uneasy relationship with standup comedy due to so much of it having been done at the expense of my humanity over the years. I asked her what standup comics could do more of in order to challenge these toxic ideas, rather than reinforce them, and the answer, in Kaitlin’s opinion, seems to be mindfulness and not taking the path.

"Making someone laugh is like shoving an electrode into their brain and watching them jump," Colombo says. "So, as a comic, you have to look at what are you choosing to make people jump at. So if you’re using humor to dehumanize others or to uphold toxic social institutions, you have to be aware of that.”

As for how she feels about the kind of jokes that dehumanize others?

“I think they’re lazy. And that offends me more than anything. What I hear when I hear a homophobic or transphobic joke, or a misogynistic joke or a racist joke, is 'I’m not actually paying attention to the changing world around me — I’m just shoveling easy, lazy shit at you and are hoping I hit you on some primal, ugly level so you can reflect my own bullshit back at me."I believe there is a difference between using humor, complete with sometimes hurtful language, to highlight and expose major decay in our culture — think Richard Pryor — and just using 'faggot' as a punchline to pander to the lowest common denominator.”

This, I believe, is an important distinction. Often comics make lazy jokes that reinforce the status quo, and hide behind the refrain that “nothing is off limits” in comedy, as if their “easy, lazy shit” was somehow insightful. I believe that comedy should touch on sensitive subjects, but as Kaitlin said, you have to be aware of what you are doing if you really want to be transformative. That said, women and other people in marginalized groups don’t exactly have the same opportunity to skate by on easy humor, and in addition to making those groups uncomfortable to perform, that mentality can be a barrier for women looking to get into doing standup. Kaitlin told me: “As a female comedian, you have to be better than all the men on the line up to even be considered as good. And that’s because the mantra of 'women aren’t funny' has been drilled into our heads for as long as entertainment has been a part of our cultural landscape.”

I really got a sense in talking to Kaitlin that she was sincere in her passion and her desire to change that cultural landscape, which I definitely respect. As a female comedian and an LGBT advocate, she talked about the urgency of the current moment in making a difference.

One of the ways that she hopes to effect change is through her new production, “GLITORIS!”, which is a throwback to the days of classic burlesque with a 90s soundtrack. While the show itself is not exactly centered on activism, and according to Kaitlin, the goal is simply for everyone to have a good time, she plans to use the proceeds to support activist and community organizations. She's interested in the work of large-scale, nation organizations, but mostly "small, local groups that are trying to ... do something organic and specific to their community."

To help fund her production, Kaitlin set up an Indiegogo page, which recently reached its goal, and the proceeds from each show will go toward supporting designated local groups.

So, if you want to see a burlesque comedy show with big band covers of 90's classics, all while supporting LGBTQI organizations (and a kickass comedian) check out Kaitlin Colombo's "GLITORIS!". And if you are looking to get into doing standup yourself, whether you are just starting or looking to establish a career in comedy, Kaitlin has some poignant advice.

"When you’re onstage and you have nothing to hide behind aside from your words, there are no secrets," she says. "So being your best as a comedian means having to look at yourself and who you are and what you believe and figure out what it is you are intentionally trying to hide from yourself and others. Because it is the thing you are trying most to conceal about yourself that will leak out like a Taco Tuesday fart while you are onstage. If you’re in the closet, people will know. If you are trying to be a version of yourself that you’ve, in fact, outgrown, people will know. And if you are saying things you don’t believe, people will know.