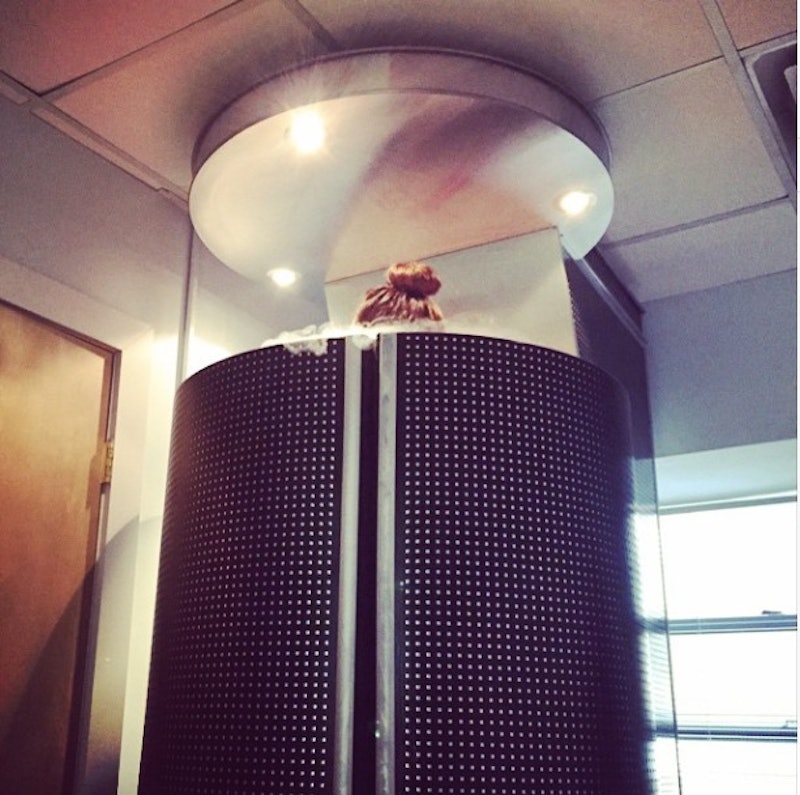 Fellow '90s kids will remember the urban legend surrounding Walt Disney’s death: Rumor had it this cartoon king was cryogenically frozen, then interred beneath the Pirates of the Caribbean ride at Disneyland. We all loved the story, believing Walt lived on in infamy as a (pirate-adjacent) popsicle. But in truth, Mr. Disney was actually cremated. You can visit him at a Southern California cemetery.

But even though his bout with cryogenics ended in farce, your frozen fantasies can become a reality — just not how you’d think. That's what I found out when my best friend Lauren asked me if I wanted to be cryogenically frozen with her.

Lauren suffers from an undiagnosed chronic pain disorder. I, on the other hand, suffer from the desire to avoid work at all costs. So when Lauren requested we sample a piece of technology that not only promised to quell her aches and pains, but to boost my metabolism, fight cellulite, promote collagen production, and burn 700 calories per session, needless to say, I was in.

Now, before you start thinking I’m totally crazy, listen to this: The New York Knicks just installed two cryosaunas at Madison Square Garden. Demi Moore swears by the trend as her favorite anti-aging trick. Daniel Craig — aka James Bond — is also a fan. Well, if it’s good for 007, then it’s good enough for me.

So we headed up to Kryolife on West 57th where, for $90 a session, they will cryogenically freeze your body for three minutes at a time. Here's what happened.

The Experiment: You first walk into the cryospa, and — in my case — are greeted by an effervescent, Colombian man telling tales of an old soccer injury cured by cryotherapy. Cryotherapy involves the process of standing nearly naked in a 6-foot-tall, sub-200 degree cryosauna chamber.

The place looks like an upscale salon, and my first stop was a bright series of changing rooms. I traded my street clothes for a fluffy robe and a very stylish tube sock/clog combo, keeping my sports bra and underwear. Their only major rule? Carefully pat yourself down with a towel before entering the machine to ensure your body is void of any moisture. (Presumably so it doesn't freeze to your body.)

Lauren stepping into the cryosauna.

The Colombian owner-cum-technician led me into a small, sparse room where the cyrosauna reigns supreme. I ditched my robe and stepped into the machine wearing nothing but my skivvies, some mittens, and, of course, the clogs. Cooled nitrogen then started to flood the machine, plummeting temperatures to negative 200 degrees.

This is when the real fun starts. Because there is no moisture in the air, your body won’t succumb to frostbite. That doesn’t mean, however, that you won’t feel the cold. I would describe the feeling as a “Streaking naked through a Boston campus in mid-January” type of cold. (Not that I would know what that feels like, of course.)

As my teeth started to chatter and I screamed at the technician to say something — ANYTHING — that would distract me, my body was tricked into thinking, “Oh s***! I’m freezing to death.” I then directed my cold-inspired-anger toward Lauren, demanding she retell the story of our friendship in copious detail hoping it would detract from the cold.

My body tumbled deeper into entered self-preservation mode, flushing blood to my vital organs and picking up otherwise unattainable amounts of oxygen, nutrients, and enzymes along the way. (Conveniently, each of those things is known to have some pretty amazing health-boosting, anti-aging benefits.)

My head stayed above the machine, and clouds of cooled nitrogen crept over the top.

When the process was over, the technician forced me to participate in 15-30 minutes of light cardio — I chose biking — to warm my body and pump blood to my extremities. Newly-enriched blood coursed through every inch of my being, carrying the aforementioned benefits along with it. I felt amazing the instant I stepped out of the machine. Lauren's first comment? "Your skin looks amazing."

The Verdict: I spent the rest of the day with glowing skin and a break from the pain of an old knee injury. My tingly body flooded with energy that lasted well into the evening. As for my "post-facial" glow? That had mostly faded by the following morning, but the blemishes on my face also disappeared. (Even though your face isn’t immersed in the cold, it receives the benefits once your blood starts recirculating.)

Perhaps the most notable difference was my mood, which was noticeably less “New York snarky” for the day. I can only ascribe my post-cryo elation to something often associated with illegal drugs, Or how Elle Woods might expect one to feel after an intense kickboxing session. (Because, duh: Happy, endorphin-filled people don’t shoot their husbands.)

As for Lauren? Her level of pain, which includes fibromyalgia and a sports injury on her shoulder, was suddenly tolerable. Her post “sauna” high had also worn off by morning, but she’s hoping repetitive use will keep the health benefits coming. Lauren has been back almost every day since our first treatment, and says the benefits last longer each time. Kryolife recommends that people looking for long lasting benefits come frequently and often — (benefits which, granted, come with a pretty high price tag).