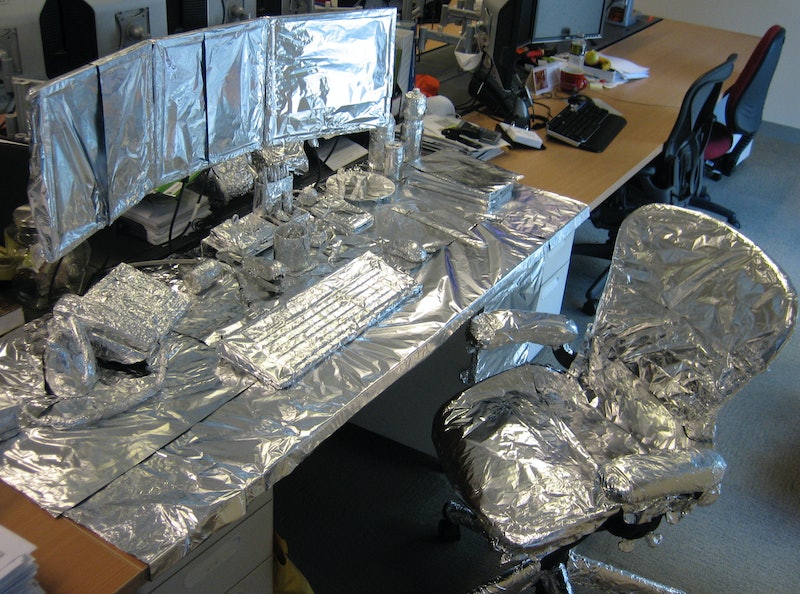 April Fools’ Day is fast approaching, so whether you choose to prank your significant other, your BFF, or your entire office, it’s time to come up with a game plan NOW. Of course, there are some stellar April Fools' Day pranks that are over-the-top and wild — but let’s be honest, nobody likes a lawsuit, so to avoid April Fools' Day litigation, your trickery should follow this basic rubric: 1) funny (I mean, who doesn’t want to earn a few chuckles or rolling hysterics for their efforts?) and 2) harmless. Not harmless in a way that squeezes all the fun out of it, I just mean no one should feel like April Fools' antics put them in harm's way. Yes, a screaming reaction is usually good… but only when it’s followed by a screaming fit of laughter.

For example, George Clooney has pulled many a questionable stunt to earn the Hollywood title of Chief Mischief-Maker, and everyone hates that guy. JK, everyone LOVES that guy! Learn everything you can from that guy — do the poor man's version of all his famous pranks — BUT just remember: he’s ultra-handsome, ultra-rich, and ultra-charming, and he could get away with murder if he wanted to. The rest of us, however, are not George Clooney, so we need to make sure that no one gets hurt.

That’s the end of my rant, folks, so go forth with these 10 April Fools’ Day pranks, and make merry!

Got any friends waiting to hear back on their college or grad school applications? Any of them happen to be huge fans of Harry Potter? Well, have I got the perfect prank for you — faux acceptance letters to Hogwarts! Make them extra formal and official-looking to have your friends wondering "what the hell is going on?!?!" — and hey, at the end of the day, "acceptance" into Hogwarts is almost better than the real thing.

This one is especially great if you still live at home. Picture this: your dear, sweet mom opens the fridge to reveal her beloved daughter's decapitated head in a pickle jar. That mental image will spark joy and laughter for years to come — but only after you manage to calm her down.

3. Eating pudding out of a mayo jar

This is a weird one, but I love it. Clean out a jar of mayo and fill it with vanilla pudding. Then the next day at work, casually pull it out and start eating straight from container. The idea of it is so disgusting that by the time 5 o'clock rolls around, Betsy the office busybody will have convinced all your coworkers to join her in staging an intervention. April Fools' mission: accomplished.

There's always the classic supergluing coins to a busy sidewalk spot and watching people try (unsuccessfully) to pick them up. Just don't follow this prankster's lead, leave wet glue on the ground, and cause a panic. However, if done right, this can be an effective and hilarious gag. There were some fake bills floating around my neighborhood last month and I was psyched out literally every time I saw one... and every time I would laugh and think, "Dammit, you got me again!"

Jim was prank master on The Office, constantly besting Dwight in their battle of the wits. As the show progressed, he moved on to more epic, long game mischief, but at the end of the pilot he makes jello with Dwight's stapler, and it's one of the cleanest, most delightful gags of the entire series. In real life, though, this prank is probably best played on a friend.

7. Turn your coworker's world upside down

This one's not a show-stopper, but it is super easy, and tame enough for almost any office. When your (hopefully good-natured) coworker heads off for a bathroom break, hit Ctrl+Alt+Down Arrow to flip the screen on his or her PC upside down. (Here's how to do it on a Mac.) The antidote is simple: Ctrl+Alt+Up Arrow... but it's probably going to take them a frustrated (read: funny) five minutes to figure that out.

If you like puns and tricking hungry, innocent tummies with the promise of delicious fudgy chocolate for the bait-and-switch of construction paper, then this will be right up your alley — a pan of brownies on the outside with inedible brown letter E's on the inside! No oven required to bake up this April Fools' trick, but you may have a hangry mob on your hands once your prank is revealed... don't say I didn't warn you!

Guys, it's H2O the molecular model, not H2O the actual water! LOL, now THAT is a doozy!!! *Sighs, shrugs shoulders* To be fair, I'm not the target demo, but if you've got access to the right equipment and a brainy, captive audience, then I predict you'll make a splash with this April Fools' Day prank. Here's looking at you, nerds.

This walks the line in terms of harmlessness, but oh my G, it would scare the bejesus out of me! In fact, maybe it's the thought that counts with this stunt. I advise you to NOT actually do it, but just think about how scary it would be. POP! AHHHHHHHHHHHH!!! Yup, that's good enough.

Happy April Fools', y'all! Just remember: always ask yourself, "What Would George Clooney Do?," and keep in mind that the first rule of April Fools' Day is safety.

More like this
10 Stranger Things-Inspired Halloween Costumes For True Fans
By Emma Carey
6 'Game Of Thrones' Halloween Costumes That Aren't Overdone
By Nina Kahn
Deliveroo Is Selling Lotus Biscoff Cinnabons Now
By Darshita Goyal
26 Ghost Story Podcasts To Get You Ready For Halloween
By Jessica Booth, Mia Mercado, JR Thorpe and Emma Carey
Get Even More From Bustle — Sign Up For The Newsletter