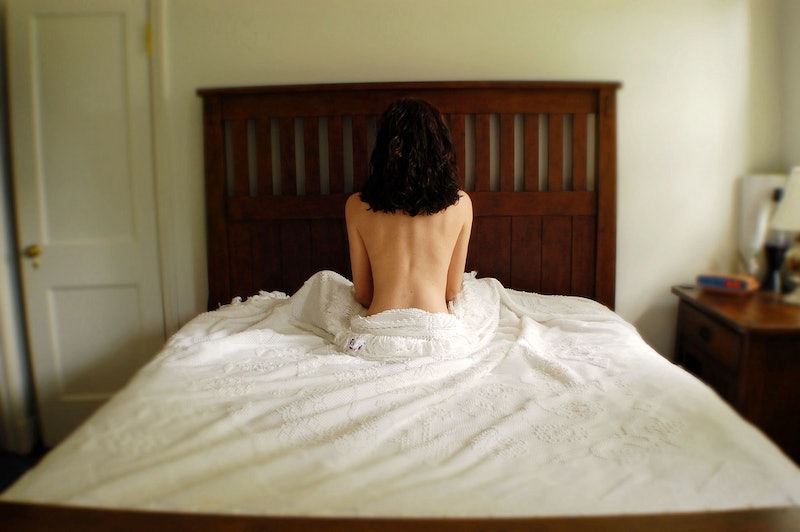 I am standing in the Self Help aisle at Barnes & Noble, trying to find a book on how to improve your sex life. The Self Help aisle is a place that, up until now, I prided myself on never having to visit. I was happy with myself, with my family, my school, my job and my relationship. But for some reason, here I am, in my early twenties, looking for my libido in a corporate bookstore.

For the majority of my sexual life, I identified as being pretty sexually explorative, down for whatever, excited by the idea of having sex wherever, whenever. Sure, there were nights where some Thai food got me in bed by nine watching Netflix but I never worried about my sex life disappearing. In fact, I thought my sex life was one of the few things I was completely confident with.

By the time I’m in the Self Help aisle, my boyfriend and I have been together for over two years. We’re in love, we’ve moved in together and share a cute, one bedroom apartment. There’s only one problem. We never have sex anymore. It’s not that we don’t like each other, we get along great. We still cuddle at night, say “I love you” and plan dates every weekend.

But every night, the question of sex floats around us like one of those cartoon clouds in an ad for anti-depressants. I know that if I initiated it, he would do it. But the thing is, I don’t want to do it. I never want to do it. The thought of sex is tedious and annoying.

When he kisses me, like really kisses me, I feel avoidant and frustrated that he even tried in the first place. And at some point, he seems to lose interest too. Our sex life becomes almost entirely nonexistent and neither of us want to confront it.

Let me give you some pre-text. When I sat down one day and counted on my fingers how many months it had been since we last had sex and came up with the number FOUR, I knew it was time to do something. I’d read most of the “Spice Up Your Sex Life” articles on the internet and started buying every women’s magazine I saw with a headline similar to what I was feeling. Titles like How To Get Back Your Sex Life in Five Easy Steps or Not In The Mood? Here’s How You Can Switch It Up In The Bedroom, called out to me in line at the grocery store. I read everything. I bought lingerie. I tried to fantasize about him. And finally, I read an article about losing your libido. The libido is the psychoanalytic theory used to describe a person’s sexual desire otherwise known as your sex drive. Basically, it is not something you want to lose. The article was the only one so far that really spoke to me. It must be gone, I thought. And now I just needed to get it back.

Flash forward two days and I’m in the bookstore, shielding my face, praying that I don’t see anyone I know. As I stand in line for the cashier, I am flipping through the book and something hits me. I don’t know where it comes from, but it slams into my head fast and loud. Nothing is wrong with me. I realized what put me here in the first place, in this Self Help section, was the fact that every single article I read on not wanting to have sex was about what I was doing wrong. Buy new underwear, they said. Try new positions, they said. Here are fifty ways to make him go crazy for your hot bod, they said. And while all of these options may be doable and effective for some, what I really needed to hear was this: Nothing is wrong with you.

The phrase that should be a mantra for all women, all the time. From our labias to our job titles, we should always be saying it. Nothing is wrong with me. But how are we supposed to walk around like a chanting cult of self-love when the entire world—media, magazines, television, music, religion, social groups, relationships, family—are telling us the opposite? And not just that, they’re tell us EXACTLY what is wrong with us.

Sometimes, we already know the answer to our problems, we’re just waiting for someone else to say it so we can admit it to ourselves.

He wasn’t a bad guy. In fact, he was probably the best guy I’d ever dated. But as I started to recount my life up until now I realized that I came to him in the first place because I needed a break from sex. My relationship before him was extremely reliant on sex. I felt a lot of pressure to perform every day and usually didn’t say no, even when I wanted to. I thought, as a young woman, it was my job to be sexually available all the time. When I found, let’s call him, Tom, that pressure wasn’t there at all. We enjoyed just spending time with each other and sometimes that meant having sex and sometimes it didn’t. But most of all, I said no when I felt like it and didn’t worry that he wouldn’t love me anymore because of it. But I never processed my prior relationship and how it affected my sexual identity, so when I did begin to process it, even subconsciously, it meant that Tom and I stopped having sex completely.

After connecting these dots, I learned about this funny thing called “desire” and how your libido fluctuates throughout your life. When we associate certain circumstances with arousal, our desire is heightened and when we associate them with risks, past trauma, or social expectations, our desire is halted. I had started off my relationship with Tom like I would any other, I said yes all the time. But when I got comfortable enough to say no and saw that it didn’t affect my relationship in a negative way, I was able to sit with my non-sexual self and really feel the emotions I now associated with sex. Emotions like anger, sensitivity and frustration were at the forefront of my brain when I thought about having sex and recognizing that would be one of the most important things I’d ever do for myself.

After connecting these dots, I still wasn’t finished. It wasn’t as simple as diagnosing myself and then going back to my relationship. I also realized that, in a lot of ways, I associated Tom with the process of coping and now, it was time for something new. I had processed all that I could in this relationship and both of us needed to grow individually. So many people had been telling me that if I left him, I wasn’t trying hard enough to fix it. It seemed like everyone had a solution, but none of those solutions were to leave.

The solution was this: I needed to connect with myself again before I could connect with other people. I had relied on Tom to help me heal and, in a lot of ways, he did, but now it was time to discover my sexual self on my own.

I've learned two important things. First, I think it's important to ALWAYS feel like you can say no. A good partner will always ask for consent, and the answer no will always be acceptable. If you don’t want to have sex, you don’t have to have sex, it doesn’t matter if this person has a label in your life. You don’t owe anybody anything. Second, Nothing is wrong with you. If you want to have sex, if you’re just a little bored with the same old routine every few nights, then by all means, spice it up. But if it doesn’t work, if it keeps not working, remember: Nothing is wrong with you. There are other options than just a numbered list of ways YOU can make your partner excited. At the end of the day, you might just need time for you.