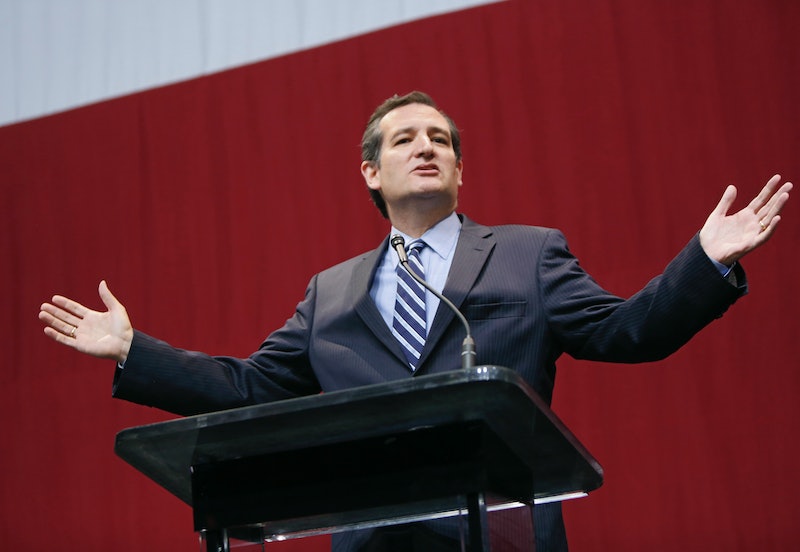 On a lot of issues, Ted Cruz believes it should be left to the states. Vaccinations have become a point of debate in the presidential primaries. And when it comes to vaccinations Ted Cruz wants them, but won't enforce them. The presidential candidate told Politico about the Cruz family's choice to vaccinate: "We’ve got two little girls, we’ve vaccinated both our girls and would encourage people to do the same." Plain and simple, he wants people to do it —"Children of course should be vaccinated."

But just because he thinks people should do it doesn't mean he thinks the government should mandate the practice. The Tenth Amendment's protection of federalism is a large part of the senator's personal ideology. Cruz even wrote he senior thesis in college about state's rights, writing his intent to "elaborate upon a conception of the Ninth and Tenth Amendments which revitalizes the Founders’ commitment to limiting government, to restraining the reach of our none-too-angelic leaders."

Cruz is a major proponent for state's rights, and ensuring those protections to ensure an individual's right's in making choices — so in theory if individual states allowed more leniency in vaccination requirements, he'd support it. He wants greater restraint on the government, not the people. Cruz added during the interview with Politico: "Most states include an exception clause for good faith religious convictions, and that's an appropriate judgment for the states to make."

During the interview, he was largely dismissive of vaccine controversies: “largely silliness stirred up by the media.” But personally, he sees the issue in black and white, "But on the question of whether kids should be vaccinated, the answer is obvious and there's widespread agreement: Of course they should." He's being practical — just because an individual has a choice to not do something, doesn't mean that they shouldn't.

But Cruz's emphasis on state's rights in assessing policy issues could be problematic for him when it comes to his views on gay marriage, but his application of the principle to vaccinations is unlikely to cause him much problem as he navigates the Republican primary in the coming months. The one thing you can say — he's at least consistent.