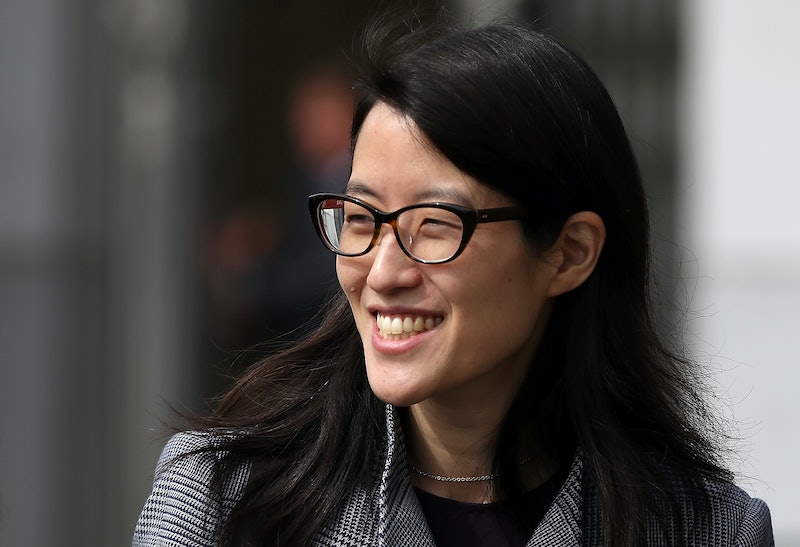 On Wednesday, the jury heard closing arguments in Ellen Pao's landmark sexism lawsuit against her former employer, Kleiner, Perkins, Caufield & Byers. Pao filed the massive gender discrimination lawsuit in 2012, accusing the Silicon Valley venture capital firm of overlooking her for promotion while her male colleagues with similar performance track records received promotions and higher pay. Months after filing the lawsuit, Pao was fired from the company in what her lawyers say was retaliation. Now, after a month-long trial, the unprecedented lawsuit that blew open Silicon Valley's gender gap will finally have a resolution — but will it be in Pao's favor?

During the two days of closing arguments, jurors heard lawyers representing Kleiner Perkins disparage Pao's ability as an employee. Pao became an investing partner at the VC firm in 2010, five years after she was hired for a chief of staff position, or junior partner. She was passed over for a senior partner position because, as lawyers emphasized on Wednesday, she was never the best or most qualified candidate.

At least, that's the argument the defense is going with. "She [Pao] was not in the universe of qualifications," lead attorney Lynne Hermle told the jury on Wednesday. Hermle added that Pao was determined to carry out a "sustained attack" on Kleiner Perkins and nothing more. In her closing argument, she made Pao out to be a self-important opportunist who thought she deserved more than what Hermle and Kleiner Perkins believes she was actually worth. Her final words, via re/code:

In conclusion, Ellen Pao didn’t fail at Kleiner Perkins because of her gender. She was not fired because of retaliation or because she was a woman. She was given every opportunity to succeed, from the move to investing path, to the speech coach, business coach, to the extra year, coaching by Matt Murphy, a clear developmeny plan laid out in review after review. She got increasing salaries and bonuses. And though she’s pointed an accusatory finger — Ellen Pao failed for one reason and one reason only — her view of her skills and performance was far different from what they were.

But Pao's lawyers questioned whether or not the junior partner was overvaluing herself or just valuing herself enough. As some have pointed out, attorney Therese Lawless took this chance to use some of that "Lean In" lingo floating around Silicon Valley, saying Pao was looked down upon and effectively punished for asking for "a seat at the table."

Lawless rebutted the defense's claim that Pao was a terrible and unqualified employee. "This is not someone who was terminated for poor performance," Lawless said, adding that her client is an "extraordinary" woman.

She also challenged the character attacks leveraged against Pao, claiming that the male employees at Kleiner Perkins were never affected by subjective character descriptors. Are we judging male employees differently from their female colleagues, Lawless asked:

If you look at the reviews of the gentlemen and see the different subject description of everyone and they’re judged — being a long wolf, acting on their own, having sharp elbows — and all those negative criticisms. Why did I show them? Because they’re human beings just like she’s a human being just like we’re all human beings.

"But for the men, it didn’t hurt them getting promoted," Lawless said. "But it hurt her."

With Pao's case ending, the next question is: Will this lawsuit, regardless of the outcome, change the tide in Silicon Valley? Lawkless seemed to think so in the court room on Wednesday, telling the jury that one woman was promoted at Kleiner Perkins in 2012 following Pao's lawsuit.

"Would she have gotten there if this lawsuit had not been filed?" Lawless asked. "I wonder."