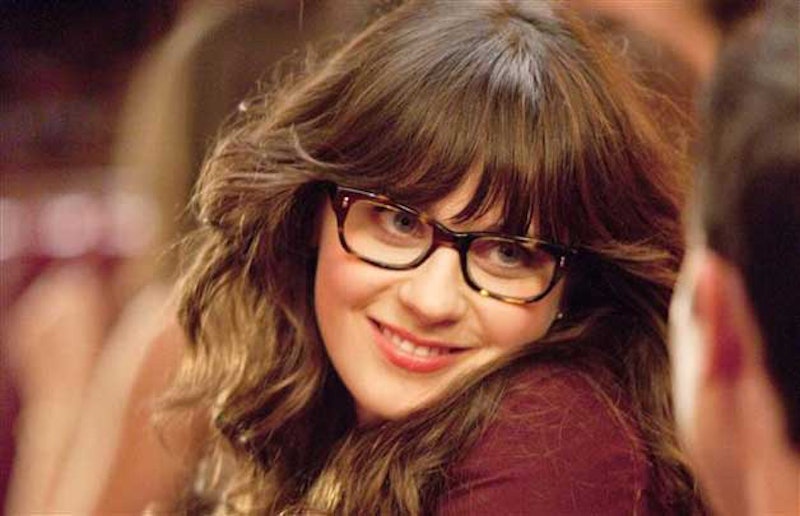 If you want to feel a bunch of conflicting emotions (and who doesn't?), the first thought you should think is "Maybe I should cut bangs." Because any woman who fusses over her hair knows that deciding whether or not to cut bangs is an extremely emotional process. It's the Ross and Rachel "will they or wont they?" of hair cuts. Because it's been well-established that bangs look cute on pretty much everyone, but also that having bangs is one of the most annoying, high-maintenance hair choices you can make.

I recently took the plunge and cut bangs. Of course, when I say that, what I really mean is that I chickened out at the hair dresser and ended up getting...sort of...half-bang...things. You know the ones. Sometimes you call them curtains. They don't go all the way across your forehead, but they frame your face in a way that makes them easy to push aside. And yet after a week, I'm still already annoyed by them. Now the problem is: What the hell do I do with them? Will I get so frustrated and antsy that in, deep in the midnight hour, I decide to cut them straight across myself? Will I maintain them like they are? Will I completely give up and grow them out right away? BANGS ARE A SCOURGE, people. But, as I said, they are also so, so very cute. And we all fall victim to their siren song at some point.

Here are the emotional stages you go through when you're trying to decide whether or not to get bangs. Be prepared.

This most commonly happens after seeing an especially cute picture of Alexa Chung rocking bangs. Alexa Chung is the leading cause of girls getting bangs they later regret.

2. You get a little obsessed with the idea of bangs

3. Which you'll proceed to show to all your friends as you painstakingly deliberate

4. You become literally the most annoying person ever

With all your unsolicited bang talk, it's a wonder that anyone even still loves you. For some reason, you're the one who's annoyed because none of your friends or family seem to care about your journey to Bangtown.

5. No seriously, no one actually cares about your bangs

As much as you wish they would give you the answer you're seeking, they honestly do not care at all.

6. Finally, you'll be decisive, and make a solid decision

You're doing it. You're getting bangs. The appointment is made. You feel so free, so empowered.

9. On your way to the hairdresser, you'll feel sick with nervousness

10. But you'll talk yourself into it, and accept that this is what's happening right now

11. As the hairdresser starts chopping, you'll be silently freaking out on the inside

12. But once they're cut and she's done styling them, you'll be so happy with your new look

14. Until you leave the salon

As soon as you leave the hairdresser, your feeling of sassiness will be replaced with regret as the wind starts to blow your new bangs into your eyes.

15. And the regret is honestly only just beginning

The feeling of regret will endure in the coming weeks will be...substantial. You'll fail to be able to style your bangs cutely, and when you do, they'll always be ruined by the elements.

16. You'll get tired of the constant grooming

F*ck this. You're growing them out.

18. Which doesn't do anything to stop the cycle of insanity

Of course, once they're all grown out, you'll start thinking about getting bangs again, which is when you'll start feeling like you might just be a complete lunatic about this.

More like this
Lily Collins Got Shaggy Curtain Bangs For Emily In Paris Season 3
By Audrey Noble
15 Must-Have September Beauty Launches, According To Our Editors
By Rachel Lapidos
This Week’s New Makeup Releases & More Beauty Headlines
By Audrey Noble
The Chicest ’90s Updo Hairstyles To Try
By Paris Giles
Get Even More From Bustle — Sign Up For The Newsletter