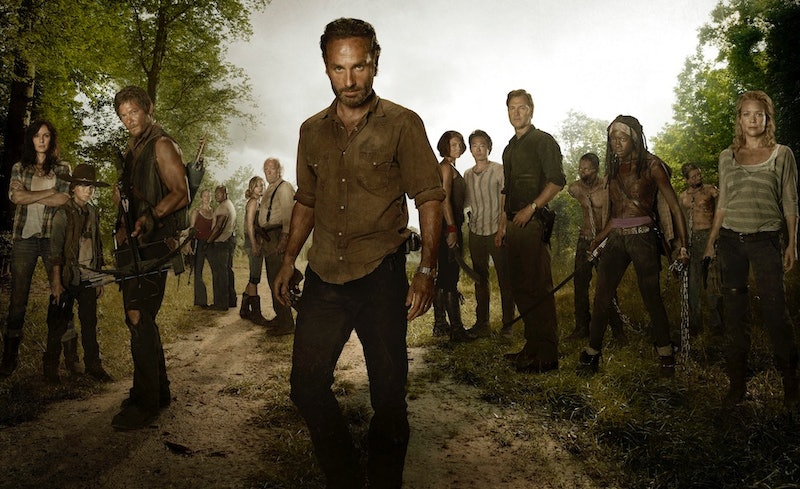 The Walking Dead may be at the height of its game both creatively and ratings-wise right now, but I have to admit: After remembering what a boring shitstorm Season 2 was, I'm worried about what this season has in store, plot-wise. In last week's premiere — the most-watched episode ever with 20 million viewers — we were introduced to a whole lot of new characters, and though the episode did keep viewers at the edge of their seats with the threat that literally anyone, core cast included, can die, I couldn't help but wonder, is the show doing itself any favors by introducing so many new characters?

This isn't always a bad thing. Shows employ guest stars to shake things up or as plot fodder, and this is okay when used sparingly. The Walking Dead is also a show based on comic books, so many of the characters — with the exception of Daryl and Sasha — were canon already, just waiting to be introduced. A problem only tends to arise when the series begins relying too much on guest stars, and ends up stealing away valuable screentime from the leads, which in this case is a pretty big group already. This season has already been promised to be more character-driven than Season 3 was, but how is it going focus on all the characters when there are so many to choose from?

We've seen this before. In Season 2, when the series introduced Hershel and his family on the farm, things got boring real quick. In the place of action or riveting plotlines involving just a few main cast members and allowing for ample drama, we were forced to watch new characters that we knew nothing about (and therefore had no reason to care for) interact with those we'd already watched for a season, fighting about whose turf is whose. For instance, when Beth tried to kill herself: As dramatic as that scene was, if she had died, would it have had a significant effect on the audience? No — she hadn't earned our sympathy yet.

What ended up happening in Season 2 is that the series slowly weeded out the uninteresting characters and left only a few who have now become integral parts of the group: Hershel, Maggie, and Beth. This wasn't a bad thing, because they were all actually interesting characters, but why did we have to spend a whole season watching others who we were never supposed to care about in the first place? Their only purpose was to die — it just seems like a waste of screentime. This season, too, look at Beth's new boyfriend Zach: The audience only had one episode to recognize him as Beaver from Veronica Mars, then he was killed off before we even had a chance to care about his death. Beth didn't even seem too upset! What was the point?

There are times, however, when the introduction of new characters has been a welcome change. Michonne, for instance, is one of the most interesting and badass characters on television right now, and the Governor, as crazy as he was, made for some great plots in Season 3. What worked for both of them, too, is that they weren't shoved in our face — instead, we were slowly introduced to them throughout the season. This is how it should be done.

As long as The Walking Dead doesn't forget about the core group in favor of introducing flashy new characters whose only purpose is to eventually become zombie food, this season looks like it's going to be another hit — we can only hope that, at this point, the show has learned from its old mistakes.