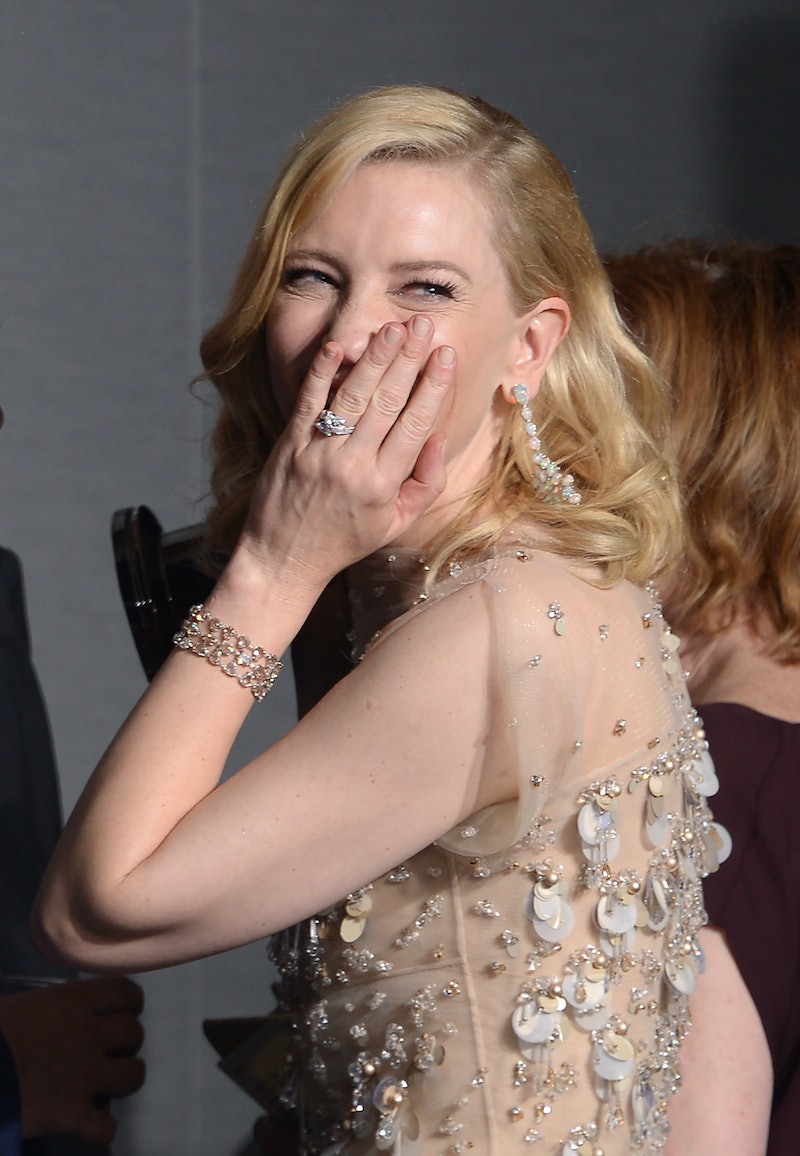 Silver screen stunner Cate Blanchett is a two-time Academy Award winner and one of the most admired actresses in Hollywood, so you'd like to think she'd get the respect she deserves with the press. Unfortunately, that doesn't always seem to be the case. During a recent interview during the press junket for her new film Cinderella, Cate Blanchett took part in a very bizarre interview which eventually begged the actress to ask the reporter, "That's your f--king question?"

According to the Huffington Post, television host Jonathan Hyla went pretty off-topic during his interview with Blanchett, asking her everything from her favorite type of beer to how she got the cat in Cinderella to behave for her while walking on a leash. (The latter is what baffled Blanchett the most, causing the "That's your f--king question?" response.) At one point in the interview, Blanchett suggested, "Let's start over."

Hyla seems to be taking his shellacking from Blanchett well enough (even posting a mashup of the disaster on his Instagram page), but she still remains the winner here. That's because Blanchett knows when to be awesomely sassy when the moment calls for it, and this scenario was far from the first time.

Perhaps most recently, there was the classic red carpet take-down of E!'s glam cam sexism at the 2014 Golden Globes. When the cameraperson tried to pan over Blanchett's body, she got right in their face and asked, "Do you do that to the guys?" Blanchett was not having it, and rightly so. It was a truly awesome red carpet moment and one that should be watched time and time again. So, let's, shall we?

In another instance, Blanchett didn't take the bait from Jimmy Kimmel with a leading question during an appearance on his show. After Kimmel asked her if she liked being evil on screen, she replied, "Are you looking for a 'yes' answer? Are you wanting to terrorize your guests and me give you license to do so?" Daaaaaamn.

In 2013, Blanchett gave David Letterman a geography lesson when he asked if Tasmania is in Australia, to which she replied, "Wikipedia is quite useful."

Of course, Blanchett has no problem answering cheeky questions (so to speak) like when she gave some straight answers, with a side of sass, during an appearance on The Graham Norton Show back in 2012 when he asked about her nude scenes.

She sure is Cate the Great, no doubt.

More like this
Twitter Is At Odds Over Taylor Swift’s Possible ‘All Too Well’ Oscar Run
By Brad Witter
Revisit 1992’s 'A League Of Their Own Cast' Photos After The New TV Series
By Grace Wehniainen
What Is Ben Affleck's Net Worth? At 50, The Oscar Winner Makes 8 Figures Per Film
By Meg Walters
Ezra Miller Apologises To Everyone "Alarmed & Upset" By Their Behaviour
By Sophie McEvoy
Get Even More From Bustle — Sign Up For The Newsletter