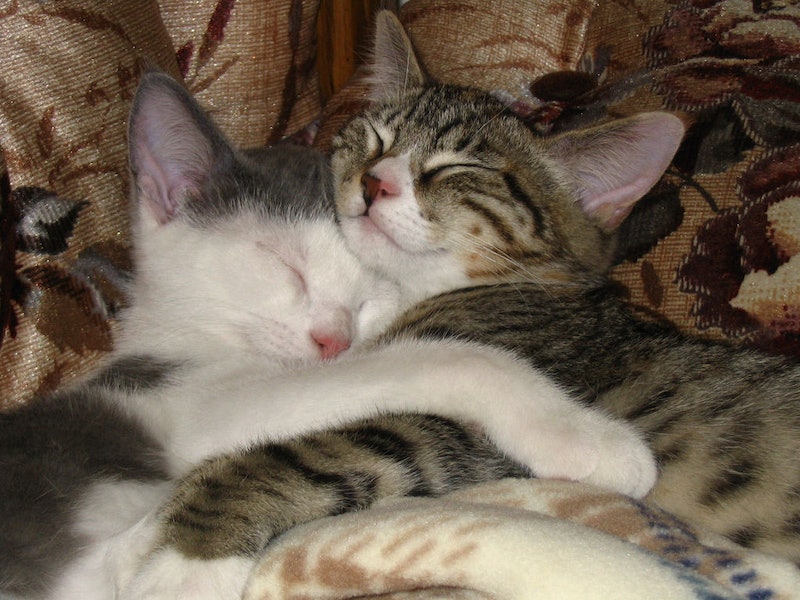 As anyone who lives far away from their family, their best friend, or their significant other can tell you, the hardest part about carrying out any type of distance relationship is the fact that you can't just randomly hug someone. But hey, guess what? Thanks to the new app HUG, there's — you guessed it — an app for that. True, it won't feel quite the same as wrapping your arms around someone and having a big ol' bear hug — but it's the next best thing.

Hug was created by former Google employees Petter and Kaspar Prinz, who came up with the idea after the discovered that the most-sent text message in 2014 was the heart emoji. That's where HUG comes in: It uses your phone's vibration function to send an actual “hug” over long distances, making the visual image of the heart emoji into a physical sensation. The best part? They literally come straight from the heart: The way in which you “record” your hug (so to speak) involves placing your phone against your chest. It sounds a little weird at first, but when you think about it, it makes perfect sense. I mean, where else could a text-based hug come from? Not so weird after all, right?

As PFSK points out, HUG is far too new to know whether it can mimic the health benefits of hugging; even if it can't, though, it's a cute way to close the distance between yourself and your loved ones. Here's how it works:

Remember that whole thing where you slap your phone against your heart to start recording the hug? Do that here. The app will then use a proximity sensor and start vibrating; once you pull the phone away from your chest, the hug will end.

Is it an excited hug? A sad one? A loving one? Take your pick.

This part's easy: Select who you want to be on the receiving end of your magnificent hug and send away.

“Receiving a hug” works kind of like recording it in reverse: If you have a hug waiting for you, put the phone to your heart and feel the love vibrating out from it.

Sure, it's a little hokey — but you guys? I kind of love it. HUG is definitely something I would have appreciated during the years my SO and I spent doing the mid-distance thing. One of the biggest benefits of finally having relocated so that we lived in the same state is that we can share big, giant, ribcage-crushing hugs whenever we want now — but during the days when we lived too far apart to do that? Well, as great as phone conversations are, there's something to be said for being able to touch someone, too.

HUG is free, so if it appeals to you in the same way it does to me (or in a totally different way — I'm all for outside-the-box thinking), snag it over at the iTunes App Store or subscribe for HUG updates to find out when it'll hit the Google Play store. Oh, and don't forget to check out the promo video below. Happy hugging!