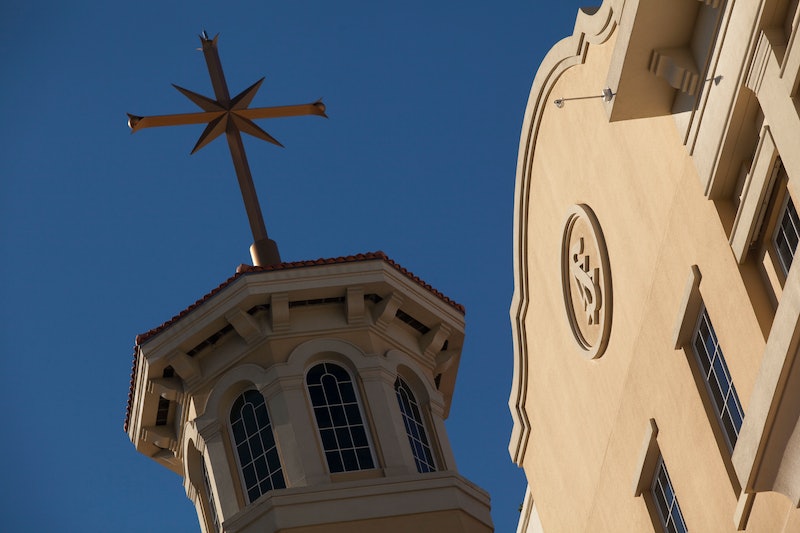 One of the biggest mysteries of HBO's new Scientology documentary Going Clear: Scientology and the Prison of Belief is what happens to be missing from the Alex Gibney-directed piece: the whereabouts of Scientology Leader David Miscavige's wife, Shelly. Despite Shelly having not been seen in the public eye since 2006, Gibney didn't tackle the subject, instead focusing on prime details to build a foundation of the basics of Scientology as it stands today. "At the end of the day, rather than doing stone skipping and covering as much as possible in a superficial way, we chose to dig in on certain things," Gibney told Business Insider.

King of Queens actress Leah Remini partially credits Shelly's not being seen with her eventual break from Scientology. It was Remini who filed a missing persons report in 2013, after asking about Shelly for years to no avail. Upon investigation, the LAPD determined that the report was unfounded.

The year before that, Shelly's attorneys issued the statement that "any reports that she is missing are false. Mrs. Miscavige has been working nonstop in the Church, as she always has."

True, Shelly had been known for her deep devotion to Scientology, but her lack of public presence and even her alleged inability to reach out to others within the church was cause for alarm for Remini and others. Former head of Scientology's Hollywood Celebrity Centre Amy Scobee, who also recently broke with the church, echoed Remini's concerns:

I've been worried for a long time. I brought it up to the FBI in 2010, too. I do think she's alive. I think she's in a [Church of Spiritual Technology] somewhere... Everyone who knew her is just saying 'produce her.' What are you covering up? Why can't you answer the questions?

Long before she became the wife of the most powerful man in Scientology who took over the church after founder L. Ron Hubbard passed away, Shelly had entered the church via Sea Org at just 12 years old. Sea Org began as a branch of the controversial religion more or less meant to take care of Hubbard as he lived his life aboard his Apollo boat in international waters. Shelly's parents essentially let the church raise her, a Vanity Fair profile alleged, and she soon found herself signing a billion year contract and devoting her life to Scientology. It was ashore at Scientology national headquarters in Clearwater, Florida, that she met David Miscavige.

Just as Shelly was committed to Scientology, David was so strongly invested that he soon ascended the church's ranks and was able to take over the organization in 1986 upon Hubbard's passing. And David's alleged temper takes center stage in Going Clear: Ex-church members all agree in the documentary that, while David was never directly abusive to Shelly, he most certainly wasn't loving. In a 2014 Vanity Fair article on Shelly Miscavige, former member John Brousseau said:

I’ve seen him [David] yell at her for not doing his bidding. He’d admonish her: ‘How dare you undermine what I just told them to do! You go back and fix it right now!’ And she would go off and eat her words and tell people an amended version of what to do. As Miscavige rose to power and became more and more bitter, Shelly sort of emulated it.

According to the profile, the Church called Vanity Fair's questions “ludicrous and offensive," and repeatedly denied that Shelly was missing.

According to a book by another former Scientologist, Marc Headley, during one of David's incredibly rare trips out of town, Shelly took Scientology matters into her own hands. After a series of failed appointments to the administrative Sea Org branch known as the Org Board, she allegedly not only restructured the Org Board but moved David's possessions out of their home on the compound to expedite renovations taking place. Headley said that's when everything changed, and she was quietly removed from her previous duties. (A Scientology spokesperson told The Sun in 2009: "Marc is currently suing the Church and he has written the book to flank his litigation.")

It's been speculated that Shelly now lives at a Church of Spiritual Technology compound in Southern California, just outside of Arrowhead. Few photos have surfaced from the area, but the ones available show a heavily guarded complex with copious cameras, flood lights, and escape-proofing measures like barbed wire fences and fences with spikes pointing towards its grounds. Dylan Gill, a former Scientologist who lived at CST for seven years, said that the shadowy complex is incredibly isolating, even for the already mysterious organization. "You really don’t have contact with other Scientologists at all. It's a good way to have somebody disappear," said Gill.

So, has Shelly Miscavige been in hiding at CST? Although Going Clear might not answer that very question, it seems the answer might not be clear enough anyway.

UPDATE: The Church of Scientology has reached out to Bustle, stating:

The claim that Shelly Miscavige, the wife of the Church’s ecclesiastical leader David Miscavige, mysteriously disappeared is false. The notion that Mrs. Miscavige is being held against her will is a conspiracy theory from the unsavory sources.The rumor has resulted in disgraceful harassment of Mr. and Mrs. Miscavige. In August 2013, the myth was put to rest when Leah Remini initiated an ill-fated publicity stunt and filed a bogus missing person report for Mrs. Miscavige ... [whose] whereabouts and well-being were confirmed, despite the calculated harassment she suffered by those who knowingly made false reports to law enforcement to the contrary.