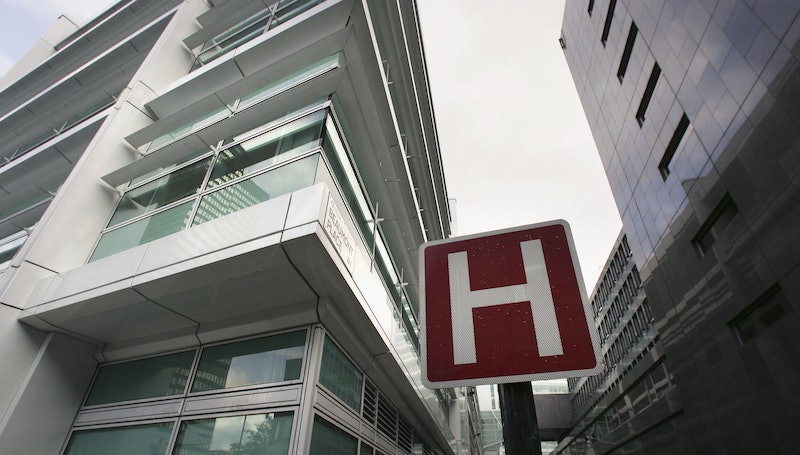 El Salvador is well-known for its stringent anti-abortion laws, but this is a new one: Women in the country are now being sent to prison for having miscarriages. Take Glenda Xiomara Cruz, who suffered years of domestic abuse from her partner, and was hospitalized for severe abdominal pain and heavy bleeding that turned out to be a miscarriage. Despite having given birth to a daughter four years before, Cruz wasn't aware she was pregnant — her weight was unchanged and her period hadn't stopped. The hospital reported her for suspected abortion.

A few weeks later, she charged with murder in a hearing she was too ill to attend, and last month, she was sentenced to 10 years in jail — because, the judge ruled, she should have saved the baby's life.

Miscarriages are not the woman's fault: It's a matter dependent entirely on one's body, on processes that function outside of a pregnant woman's control. But part of the legal problem, her lawyer said, is that the El Savadoran relies on a presumption of guilt: In other words, guilty until proven innocent. The Western legal system is set up to the opposite effect — innocent until proven guilty.

"[Cruz] is yet another innocent victim of our unjust and discriminatory legal system which jails poor, young women who suffer obstetric complications for murder on the most flimsy evidence," her lawyer, Dennis Munoz Estanley, said. Cruz' partner has claimed that Cruz tried to kill the fetus. and the prosecution was originally looking to have Cruz jailed for 50 years.

In El Salvador, such proceedings aren't uncommon: Between 2000 and 2011, 200 women were reported for alleged abortion attempts. 129 were prosecuted and 49 convicted on charges of murder and abortion. Estanley has represented 29 of those women — only one of them, he said, actually had had an abortion. The other 28 were allegedly miscarriages.

Slate writer Amanda Marcotte says that the jail women's convictions are the result of the law having to justify itself — i.e., if no one's "caught" trying to procure the abortion, then there wouldn't be any need for the law, and then the process would virtually be legal. The country's total ban on abortions mirrors the policies of nearby countries of Nicaragua, Chile, Honduras and Dominican Republic — the only five countries in the world that provide no leeway on the matter.

But don't think this doesn't happen close to home: In America, women have also been arrested for pregnancies that have ended badly — mostly in still births — on claims that the women had taken drugs and had thus endangered the life of their fetus. For the women who deny the claims — and there are many — the women whose bodies faulted them now face years in jail. "I'm just living one day at a time, looking after my three other kids," said Amanda Kimborough of Alabama, who was sentenced 10 years behind bars in 2011, and denies all charges. "They say I'm a criminal, how do I answer that? I'm a good mother."

Another woman, who was charged with a "depraved-heart murder of her unborn child," after it was discovered her miscarriage accompanied a cocaine habit, faced a mandatory life sentence. In Mississippi, abortion is legal — yet she was being arrested for her pregnancy's termination.

"If it's not a crime for a mother to intentionally end her pregnancy, how can it be a crime for her to do it unintentionally, whether by taking drugs or smoking or whatever it is?" said civil rights lawyer Robert McDuff.

In other states, a fuzzy line continues between who should and should not have an abortion: In a recent case in Nebraska, where abortion for under-17s is illegal without parental consent, an emancipated, pregnant 16-year-old girl was legally barred from getting an abortion because the court ruled she was too immature to make such a decision on her own — never mind that she'd already made the (mature) decision that she was too financially strapepd to be a mother.

More like this
Iran Has Issued A Death Sentence Over Mahsa Amini Protests
By Catharina Cheung, Darshita Goyal and Maxine Harrison
Ghislaine Maxwell Is Serving Her 20-Year Prison Sentence In Florida
By Gretchen Smail and Brad Witter
This Company Will Send STI Tests Right To Your Door
By Lexi Inks
Amanda Gorman Shared A Powerful Message On Meghan Markle’s Penultimate Podcast
By Darshita Goyal
Get Even More From Bustle — Sign Up For The Newsletter