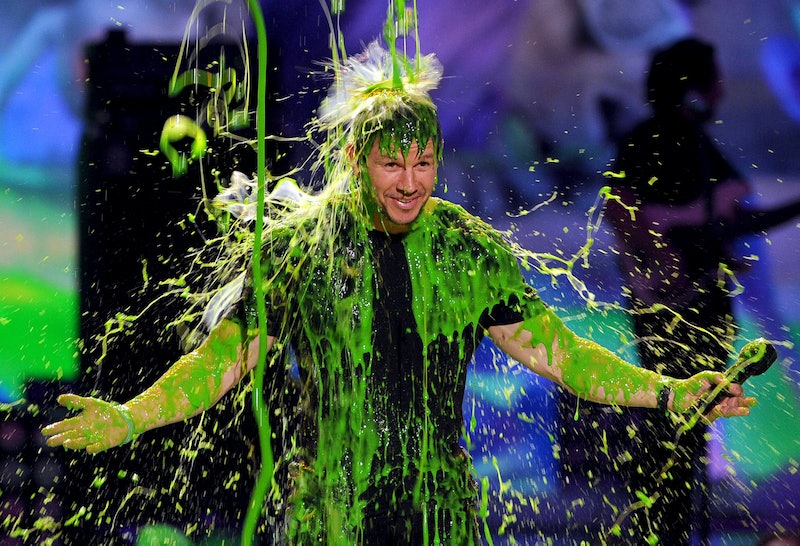 If there's anything Nickelodeon does best, it's knowing exactly what kids wanna see. Growing up, I remember staying glued to that channel all day, all the time. And the Kids Choice Awards, airing Saturday night, is the one award show where kids are totally in charge — plus, there's a lot of the channel's signature slime that'll probably be poured on some celebrities' heads. But sliming won't be the only moments that make this a must-stream event — and you can totally do that if you have a cable provider that lets you watch online or if you can wait until Nick.com puts The Kids Choice Awards up to stream online.

This year, Nick Jonas hosts the slime-fest, which will include appearances by Emma Stone, Kevin James, Jamie Foxx, the dreamy Liam Hemsworth, Kaley Cuoco-Sweeting, Ross Lynch, Fifth Harmony, and more. Orange blimp trophies will be awarded in categories like Favorite Kids Show, Favorite Cartoon, Favorite Book and Most Addictive Game, as decided by votes cast on Nickelodeon's website. And the slime will fall on, well, whoever the slime gods decide who to dump the green stuff on — that's just the way it goes and you won't wanna miss a moment.

Here are seven awesome moments from past Kids Choice Awards — and, of course, some of them involve slime.

Of course, the green stuff eventually got him.

When Mark Wahlberg Finally Got Slimed

There really is no escape.

This One Direction Performance from 2013's Show

Ah, the good ol' days, back before Zayn Malik decided to leave. Sadface.

When Katy Perry Got Surprise-Slimed

If you're doubting the actor's comedic and dancing chops, this video will prove you wrong. "Mr. Fergie," as two little girls call him, goes all out dancing and singing for this super fun collection of bits, which include cameos by Darren Criss, Steven Tyler, Sophia Grace and Rosie, Megan Fox, and his wife Fergie.

Taking slime to a whole other level.

When the Cast of The Hunger Games Got Slimed

I guess they all volunteered as tribute.

When Kristen Stewart Declared Her Love

What'll happen — and who will get slimed — this year? It's anyone's guess.