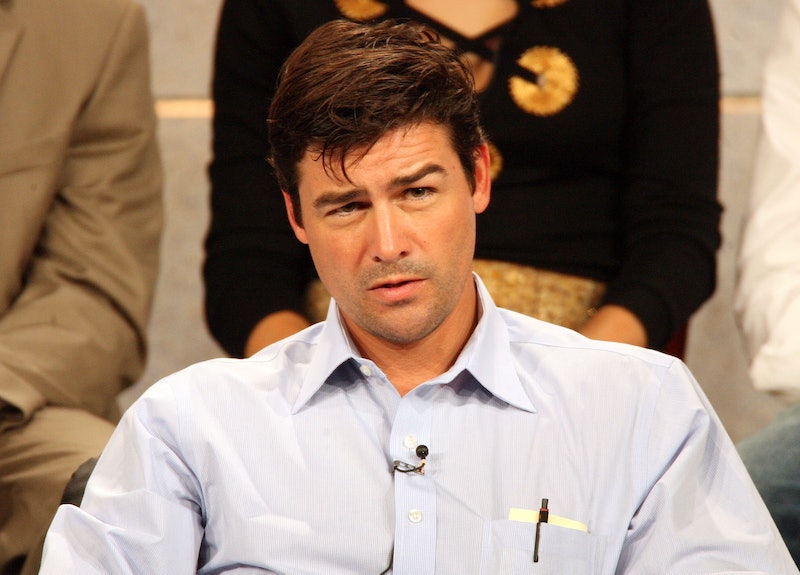 Kyle Chandler can simply do no wrong. The beloved actor is getting rave reviews in the new hit Netflix series Bloodline these days, but I gotta face it — he'll always be Coach Eric Taylor from Friday Night Lights to me. But even before he stepped onto that Panthers football field, Chandler stole hearts as the Dylan Young the Bomb Squad Guy, the greatest character on ABC's Grey's Anatomy , which celebrates its 10th anniversary. Seriously? Seriously, the first Shonda Rhimes series is a decade old and even years later, Dylan Young is the best character to have ever lived (and died) in Seattle Grace Hospital.

Chandler was nominated for an Primetime Emmy for the guest starring role in the bomb-disarming post-Super Bowl two-parter of the series, called "It's the End of the World," and "As We Know It." It was a fateful appearance for many reasons: He received tons of press and praise for his work on the episode, and, while shooting Grey's , he met Peter Berg, who was working and casting FNL on the same lot as Grey's. So we actually have Dylan Young to thank not only for being awesome and brave, but for leading Chandler to becoming Coach Taylor and eventually winning the Emmy for Lead Actor in a Drama Series for FNL. See how everything works out?

But let's take look back at Dylan Young, the heroic bomb squad guy who is still Grey's bravest soul. I mean, he carried a bomb — but hold on, we'll get to that.

He Was So Calm Under Pressure

Dylan was so calm and sure about everything, even though, there was a bomb in a person in the hospital. He calmed down Dr. Meredith Grey (Ellen Pompeo) from freaking out about, you know, holding onto an explosive that's lodged into an actual person.

In real life, Chandler was actually the nervous one. "I wore ankle braces to help me feel solid and rooted to the ground," he told Entertainment Weekly. "I was so nervous. It was a big moment for me: You can go in there and be really f-cking nervous or you can have a good time."

How Could You Not Trust This Face?

It's impossible. When this face tells you how to handle a bomb, you listen.

He Carried a Bomb

While Meredith freaked out about having her hand on the bomb, Dylan carried that thing out into the hallway, which sadly led to his demise. But still, he took the bomb from her and attempted to walk it out of the hospital, calmly. It's so impressive and admirable that he was so calm. The moment when he dies still devastates me any time I see it (above, get tissues if you press play).

He Came Back From the Dead (Sort Of)

Roughly a year later in a three-episode story, Meredith nearly dies from drowning while at the scene of a ferryboat accident and she gets sent to limbo. She sees many acquaintances and one is Dylan. He says so much with a single "Hey" to Meredith.

It was a return appearance that surprised Chandler himself. “It was interesting, even after the first episode, where I just said, 'Hey' at the very end of it, I had more people coming up to me, going 'You’re back, you’re back!'" he told the Chicago Tribune. And it was good to have him back, if only for a little bit.

More like this
Shonda Rhimes Responded To The Surprise Exit Of A Day 1 'Grey's Anatomy' Figure
By Grace Wehniainen
This 'Gossip Girl' Wardrobe Error Has Gone Viral On TikTok
By Alyssa Lapid
All The ’70s Easter Eggs You Missed In 'That ’90s Show'
By Grace Wehniainen
At 28, Debra Jo Rupp Was Living A Much Different '70s Show
By Grace Wehniainen
Get Even More From Bustle — Sign Up For The Newsletter
From hair trends to relationship advice, our daily newsletter has everything you need to sound like a person who’s on TikTok, even if you aren’t.