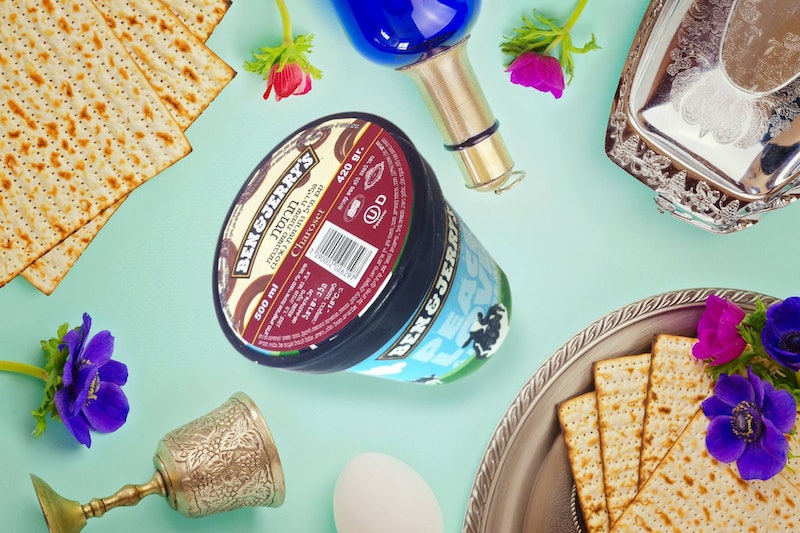 Why is the world so taken with the idea of charoset ice cream? I suspect it has something to do with the way it riffs on the familiar: Anyone who has ever observed Passover knows that charoset is a fixture of the event. Charoset ice cream, though? That's a fun, new twist — and the creativity behind it is rather appealing.

But hey, even if we can't get Ben and Jerry's charoset ice cream in the States, there are still plenty of other ways to add a little something unexpected to your table while still abiding by the rules that govern kosher-for-Passover meals. Why not give one of these outside-the-box desserts a shot?

You can't go wrong when you take your cues from your favorite Girl Scout Cookie, right? Hummingbird High's recipe also includes the substitutions needed to make this one kosher for Passover.

Pavlova usually involves cornstarch, but The Kitchn's version omits it to make it kosher for Passover; the result is kind of like a giant meringue topped with all sorts of yumminess.

“One of the suggestions in the Gemara is to serve the children nuts and parched corn throughout the seder to keep them engaged and asking questions,” writes Shoshana of Couldn't Be Parve. “I like the idea of giving the children a special snack at a strange time in the meal in order to get them to ask questions, but instead of nuts and parched corn I serve marshmallow frogs.” But you don't have to be a kid to enjoy these “kosher Peeps!”

Sick of regular ol' macaroons? Give Smitten Kitchen's torte a shot. It'll change things up while still giving a nod to tradition. (Those are coconuts in Simba's hands, by the way. Just y'know... FYI.)