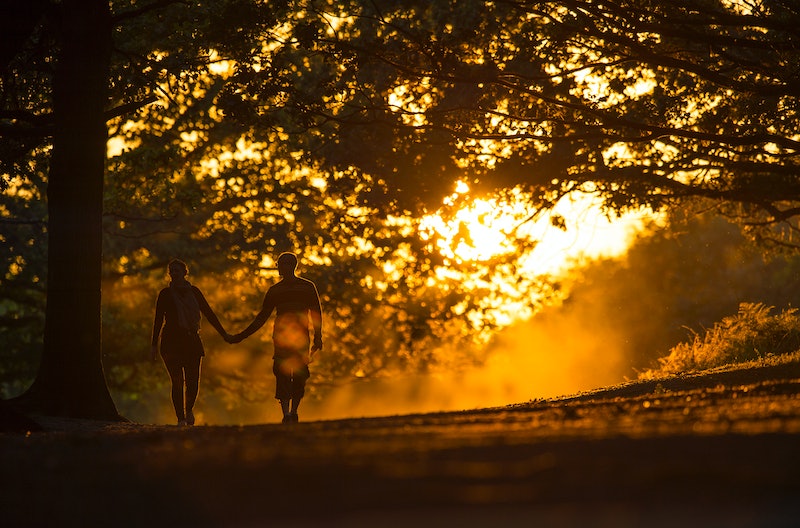 I came across an article on Hello Giggles in which a reader asked whether it's OK to date other people while her BF is away for two years. HG writer Sarah Weir's response noted that while dating just for the sake of it might not be the best idea, not allowing things to develop with other people if they naturally begin to do so might be just as much of a mistake. As someone who has gone through this process before, I can actually offer a really positive account of this experience; however, it's also probably not for everyone. Here's my take on the question:

I was in a serious relationship with a girl for three and a half years which started in high school and continued into our early college years. After we'd both been in Boston for a few years, she went to Montreal for a year to study abroad. Before she left, there was a lot of distressed discussion and drunken tears surrounding the topic. Should we date other people? Should we sleep with other people? Should we tell one another when we do? What if it becomes too serious? What if one of us falls in love with someone else?

Around the time she left, we decided to green-light the whole dating-and-sex-with-other-people thing — even if it was consistent sex with the same person — as long as there weren't any sort of serious feelings involved. I wasn't interested in restricting her experiences in this new city by limiting the ways she connected with other people, and neither of us wanted to police the other person's body. Though our arrangement was pretty open, we both had the responsibility to monitor the intensity of our feelings towards the other people with whom we were involved; furthermore, we were also responsible for telling those people that we had a long-term primary partner, just so everyone was clear about what the situation was. For the duration of the time we did this, it was pretty successful. Here are some reasons it worked for us:

1. We were open and honest about our fears.

While neither of us were particularly jealous people, it's a little unsettling to imagine the person you love fall in love with someone else. Knowing what she was worried about and telling her what I was stressed about helped us to understand the best way to carry out this open relationship while still being kind and considerate to each other — plus, it gave us the tools to make sure we avoided getting into situations that made either of us uncomfortable. Yes, some of the fears were irrational, but that doesn't mean they weren't valid. To make long-distance open relationships work, you have to accept the validity of every fear and stress and work with your partner to alleviate it.

If you and your partner aren't always honest with one another, don't always communicate the depths of your feelings, and/or are worried that the other person won't necessarily respect your fears, having an open relationship will be a little trickier. As with everything else, communication is key.

2. We worked on setting some ground rules.

Even though we had very few restrictions, we talked about the ones we did have in detail. We decided that if one of us did start developing serious feelings for someone else, we would either end it with the other person or re-group with one another and talk about what it meant. While the thought of her breaking up with me for another person broke my heart, I err on the practicality; I knew that it's a possibility and it was not up to me to stop her. Ultimately, we only wanted happiness for the other person, and most of our discussions about rules ended in the conclusion, "But if this is unreasonable, we can change it." We had rules, but we also had space to have an open dialogue if the rules stopped working.

3. We had dated for more than three years prior to her leaving.

One of the big reasons dating other people was successful for us was because we had three years of accumulated trust, love, and compassion to fall back on if something went wrong. I loved her and trusted her so much that it didn't matter to me that she was sharing her body and intellect with other humans in romantic ways; and at the same time, she loved and trusted me enough to know I would always keep her in the loop about my adventures. This kind of trust is more difficult to cultivate in a brand-new relationship because you don't necessarily know the ins and outs of your partner yet. You haven't necessarily grown with them in a substantial way.

4. We both understood we were too young to never have dated or slept with anyone else

We started dating when we were 17 years old and she left for Montreal when we were 20. It's really lucky that both of us understood that we were too young not to experience intimacy at some level with other people (to be honest, it's probably because we were both Sagittariuses and our adventurous souls don't let us sit still). She didn't want to live the rest of her life wondering "what if" and then feeling resentful towards me, and I didn't only want to experience sex with one other human ever. In this way, her study abroad trip was actually a great opportunity for us to grow not only into ourselves, but also with other human beings.

My open long distance relationship worked for me because, while the arrangement lasted, I was able to develop new connections with humans I wouldn't have otherwise experienced while strengthening my relationship with my primary partner at the same time. We used the experience to make sure we were both happy and comfortable in our respective spaces. It also worked because she was on the same page as me and interested in doing the same thing. While there were a variety of risks involved, we took the plunge for the sake of love and growth, both personal and as a couple and the results were significantly better than expected.

The moral of the story? If you think it might work, give it a shot; if you don't, don't. Either way, you'll learn more about yourself — and each other — in the process.