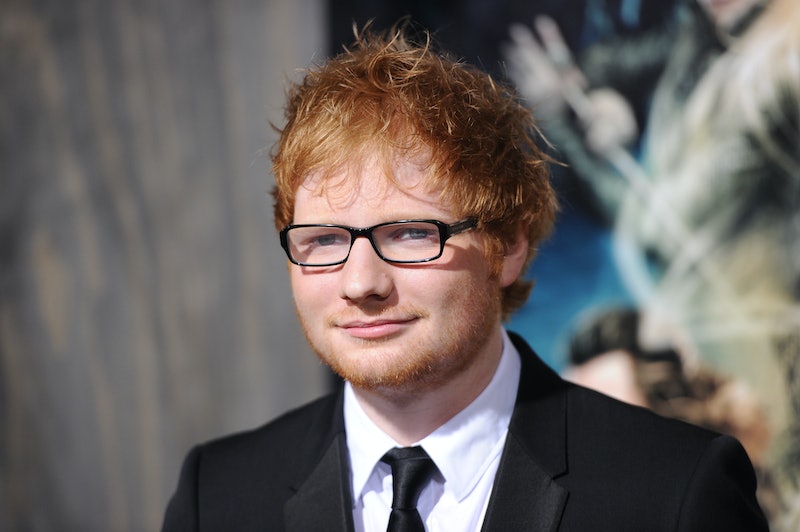 Sad news for everyone's — er, some people's favorite British ginger. (Hey! Just trying not to alienate any Prince Harry or Ron Weasley fans here.) According to Yahoo! Celebrity UK, Ed Sheeran has split up with girlfriend Athina Andrelos. Go ahead. Listen to "Thinking Out Loud" and shed a tear or two.

Reportedly, Sheeran opened up about breaking up with his girlfriend, who works in the food industry, during an interview with Australia's Kyle And Jackie O Show. According to the Daily Mail , the singer said, "I wasn't single, I was in a relationship for a long time." Then, when asked by co-host Kyle if he's single now, he responded, "Yes." Jackie O then said, "He looks like he's about to start crying — you shouldn't have asked that." (My god, Jackie, have some tact!) To which Sheeran said, "Erm … well that's interesting, that's the first time I've spoken about that."

Oof. That is awkward. Sheeran and Andrelos could be on totally great terms, but realizing you accidentally opened up about a breakup during an interview has to be rough.

The reason the two broke up is unclear, although Yahoo! Celebrity UK points out that it may have had to do with Sheeran putting his career first. He told the site in December when asked about settling down,

I'm not getting to that point. I think had my star stopped going up then yeah maybe. If my career had plateaued and it was just England and I was just working four months in a year and then chilling out ... So I don't really see that happening anytime soon.

Whatever the reason, hopefully Sheeran and Andrelos are both doing well and not listening to too much Ed Sheeran music. I imagine his love songs would be a little depressing at the moment.