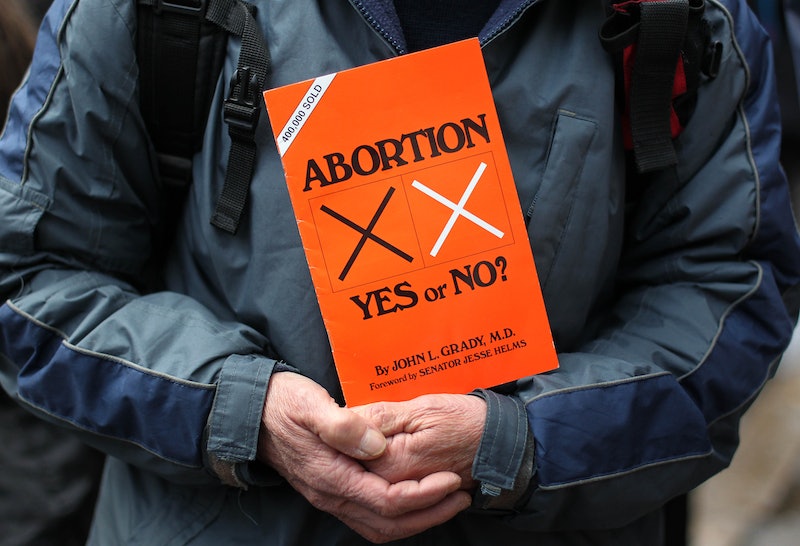 Just when you think anti-abortion politicians could not sink any lower in their histrionics, a state like Arizona passes legislation that restricts abortion from medical insurance coverage and — get this — requires doctors to tell women that drug-induced abortions could be "reversed." Introduced by Phoenix Republican Sen. Nancy Barto, the measure is aimed primarily at blocking women from buying a health care plan that covers abortion procedures through the federal marketplace.

Senate Bill 1318 — whose supporters said it would prevent taxpayers from paying for abortion services — requiring doctors to inform women that the effects of an abortion can be reversed by using high doses of a hormone is believed to be the first of its kind, though Arkansas is debating a similar measure. Critics have blasted the requirement, saying that no science backs it up. Phoenix Democrat and Senate Minority Leader Katie Hobbs told Reuters:

This is junk science, this is quack medicine. There is absolutely no evidence anywhere... that supports this as a valid medical procedure.

So why in the world would GOP lawmakers include such a requirement? Amanda Marcotte wrote in Slate that it reinforces, through a forced "stamp of medical authority," the expectation that women regret their abortions shortly after the procedure — an expectation rooted in the antiquated suspicion of an abortion and the historical suppression of women's rights.

The requirement was the most hotly-debated topic in the bill, Reuters reported — and understandably so. The idea that an abortion can be reversed by saturating the body with a hormone has neither the evidence to back it up nor even enough research to have drawn that conclusion. Dr. Kathleen Morrell, an abortion doctor and advocate at Physicians for Reproductive Health, told ABC News:

It's experimental. It's untested, and if we don't know it works then why are we doing it? Show me the evidence, because we have piles of research behind what we're doing. They don't have a pile.

The myth of abortion reversal, first developed by Dr. George Delgado, claims that injecting patients with a high dose of progesterone can counter the effects the drug mifepristone, which is used to induce an abortion. Delgado wrote a paper in 2012 alleging to have reversed abortions in six women, but his paper is the sole claim to the success of such a procedure, or more accurately, experiment.

Others say that it's misleading. Mifepristone alone is, in many cases, not enough to induce an abortion. NARAL Pro-Choice Arizona board member Gabrielle Goodrick, who provides abortion services in Phoenix, said that using progesterone to "reverse an abortion" would require pumping the body with dangerous levels of the hormone.

The first tablet, mifepristone, alone, can be up to 60 percent effective in ending the pregnancy, so 40 percent would continue. The whole idea of flooding the body with progesterone — [mifepristone] Mifeprex has an eight times higher affinity for the receptors than real progesterone, so you’d probably have to flood them with toxic levels of progesterone to even make an effect, which again is hypothetical. There is no medical data or any legitimate studies done to show this is effective.

Such a requirement in a bill that already limits freedoms is social conservatives' method of subtly promulgating a right-wing agenda that, frankly, has no place in modern society. The bill now awaits the signature of Arizona Gov. Doug Ducey — who is anti-abortion but has yet to weigh in on the measure — to become law.