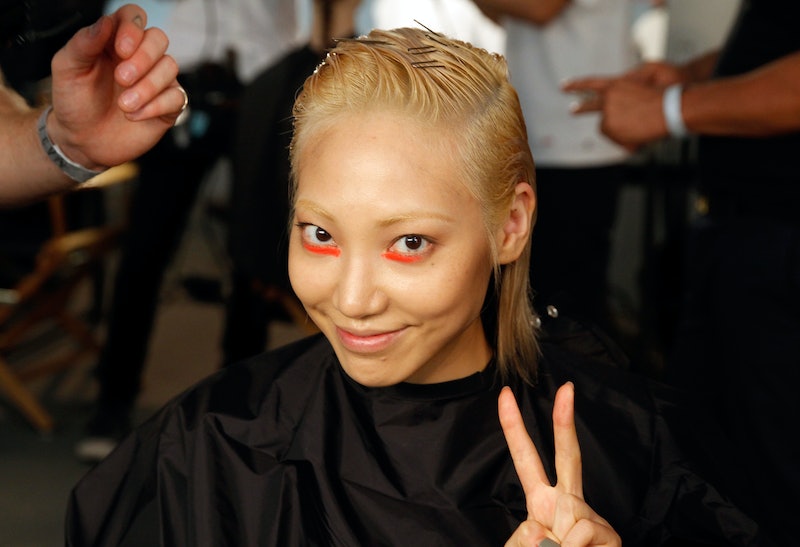 Soo Joo Park has always kicked ass. Girl didn't even start her modeling career until she was 26, which is extremely unique for a model her type. And now, we have to give a huge congratulations to Soo Joo Park for becoming L'Oreal Paris' new face, making her the first Asian-American woman to represent L'Oreal Paris in its 106 year standing, according to Yahoo Style.

Park, who's represented by powerhouses like Wilhemena New York, IMG Paris, and Monster Management in Milan, has graced the magazines of Vanity Fair, Vogue, and The Wild Magazine. On top of that, she's appeared on the runways of Chanel, Moschino, and Max Mara. We also know she's got great street style—she's been snapped on the circles and rues of of London and Paris, rocking her iconic platinum blonde hair. Basically, her style is on, for a lack of a better word, fleek.

Park first moved to California when she was 10 years old after being born and raised in Seoul, Korea. She then went on to get a degree in architecture, and didn't begin to model until she completed her studies. And now, she's representing two paramount beauty houses—Redken, which was announced last December, and now, L'Oreal Paris.

In an interview with Style.com, Park said,"people are starting to understand that the world is getting smaller and you see different faces everywhere. So to be the first to represent a global brand is a huge honor. But I don’t want to be just that one thing; I want to be the global ambassador.”

And I give you some serious props, Soo Joo Park. Growing up as an Asian-American myself, it was difficult to identify with the models in the pages of a magazine. I distinctly remember in middle school, when an acquaintance of mine told me that Asian girls "couldn't model because you're all too short." In the words of Gina Rodriguez, Soo Joo Park can, and she did. And while I'm older and (hopefully) wiser, the middle school girl in me can't help but feel a sense of hope and victory.