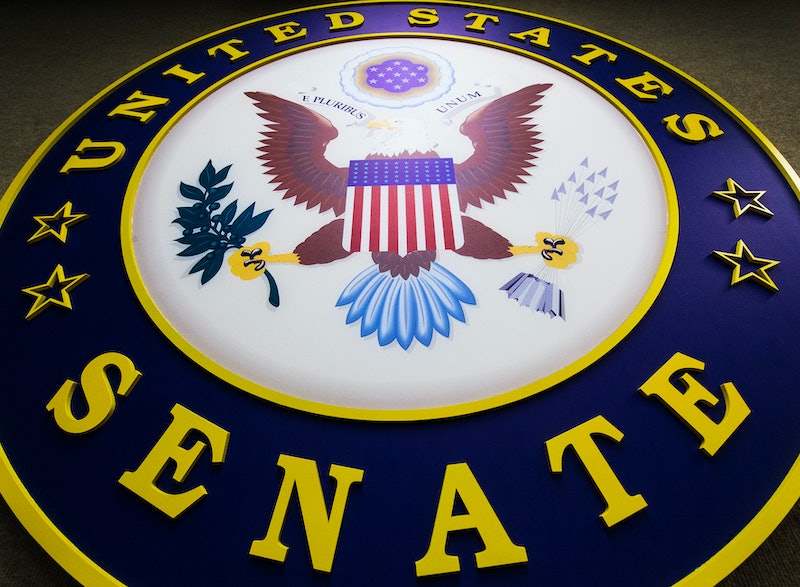 Early Friday morning, the Republican-controlled Senate approved a budget plan that would cut spending by $5.1 trillion over 10 years, raise military funding, and repeal the health care law, aka Obamacare. The non-binding budget was voted on during a 15-hour session that extended to 3:30 a.m. on Friday. The budget is the first spending plan approved by the new Republican-majority Senate. The House, also controlled by the GOP, passed a similar spending plan on Wednesday.

The Senate budget passed 52-46. The marathon talks gave senators facing election races in 2016 the opportunity to flex their chops and establish their principles. With Democrats opposed, all senators voted on party lines, except recently announced presidential hopeful Sen. Ted Cruz and expected candidate Sen. Rand Paul, who both voted no.

During discussions, Paul and Sen. Marco Rubio, another likely GOP presidential candidate, both offered up amendments to increase defense spending. In the end, the approved budget proposal provides extra money for the military through the Overseas Contingency Operations fund and increases the Pentagon's budget to $612 billion. Non-defense programs — such as Medicaid, education, and health care — would see their budgets dramatically downsized much to the chagrin of Democrats.

Much of Thursday was spent discussing and debating on dozens of budget amendments. Senators granted Social Security benefits to same-sex couples in states that have not approved gay marriage. Workplace rights for pregnant women were expanded. They also voted to expand worker access to paid sick leave.

The two houses must now compromise through talks to negotiate the differences in their budgets. Then, they'll begin the laborious process of appropriating funds to specific programs before drafting legislation that'll reach President Obama. Even then, whatever budget comes across his desk is likely to face intense opposition. In an interview with The Huffington Post, Obama said he wouldn't approve a budget that doesn't fix sequestration, the spending cuts that are set to return in October.

More like this
How 5 People Upended Their Lives To Fight For Abortion Rights
By Hannah Smothers
Here’s How Lizzo Is Supporting Abortion Rights After The Roe v. Wade Reversal
By Brad Witter
The UK Abortion Laws In 2022, Explained
By Sophie McEvoy
Police Shove 'Full House' Star Jodie Sweetin At An Abortion Rights Protest
By Radhika Menon
Get Even More From Bustle — Sign Up For The Newsletter