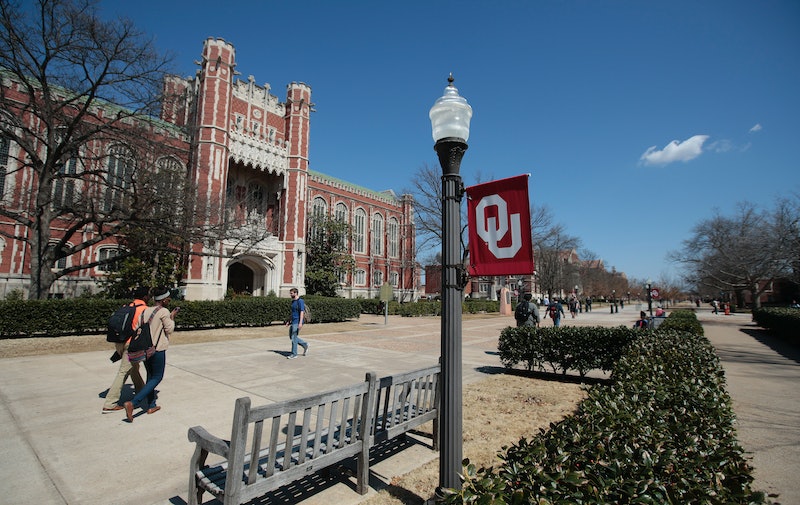 The camera shook as the bus bumped along. It made it hard to make out the blur of young men and women decked in formal attire who, aside from Levi Pettit, bounced in and out of the rectangular frame. But while the identities of many participants was lost, the collective chant was loud and clear — “There will never be a n*gger in SAE.” Cut to almost three weeks later, when Pettit stood on a stage, surrounded by black civil rights activists and leaders, and apologized for his role in the University of Oklahoma fraternity chant that caused a nationwide uproar.

The OU chapter of Sigma Alpha Epsilon became the temporary faces of unabashed racism. The video hit Twitter on March 8, and in the following weeks more egregious fraternity-related incidents would follow. Each held up as a pillar of hate that, to me, has dominated fraternity life for years. (In a statement, SAE says: "Discrimination and racial bias of any kind has no place in our organization and will not be tolerated.")

All of these incidents became national headlines. But for me, none of it was breaking news. I dated a fraternity brother for three years during undergrad, so my experience with university Greek culture was that of a spectator with court side seats. I’ve been on that bouncing bus. I’ve heard those scrawled ruminations played out in real conversations. I’ve experienced the gross denigration of women.

But the difference between headlines and my experience was the outcome. In my world, there were no expulsions or chapter suspensions. And there was certainly never a press conference — much less an apology — at the end. The sexist, racist, classist things the happened in the house, at the formals, on the bus, were secrets tacitly kept behind closed doors. Social media has changed that.

My freshman year, social media usage in adults between 18 and 29 hovered around 60 percent. By the time I graduated it was closer to 90, leveling there for the next few years. I didn’t have a data plan on my phone until my junior year of college, but with mobile phone Internet usage at 60.9 percent in 2015, it’s a safe bet that most students now begin and end their collegiate careers with instant access to Twitter, Facebook, and Instagram.

Pew charted a major uptick — from 33 to 69 percent — in social media activism between 2008 and 2012. I would guess that the growth has continued. The Internet has fostered a community that has played a major role in exposing injustice. For example, the bus chant went viral after the video was anonymously sent to the black student group OU Unheard. After Unheard posted it to their Twitter account, it dominated social media and, subsequently, news networks, making the inarguable value of online activism clear. Among the vapid trending hashtags there are also critical conversations about race and gender inequality taking place. (In a statement, SAE said: "The song is horrific and does not at all reflect our values as an organization. If we find any other examples of this kind of behavior currently occurring, we will hold our members accountable, just as we’ve done in Oklahoma.")

Exposing these prejudices is part of the power social media puts in the hands of millions of users. Along with giving them a voice — an anonymous voice when necessary — it gives a chance to rope in thinkers and activists that can provide a worldly critique of microcosms like the OU bus.

Inaction is inexcusable, and I recognize that by not saying anything I was a part of the problem. I am still deeply ashamed of that. But the proliferation of social media, and the power to turn once voice into many, has already begun and will continue to disrupt that silence. Online communities can transcend groupthink of organizations, and through Twitter and Facebook they provide support, education, and spur action for those willing to seize it. Sexism and racism can no longer go unchecked.

In the last month, fraternities have become the racist-sexist-classist cause célèbre in national media, with Google searches for “fraternity” rocketing to 10-year highs surrounding the OU scandal and subsequent high-profile incidents. Good. It is interrupting a long culture of entitlement and infallibility that protects these antiquated traditions. Google search for "fraternity":

The biggest lesson we can take from the Sigma Alpha Epsilon chant is how pervasive arcane attitudes can be when they are protected from within. The current member of SAE didn't come up with that song; it was passed down to them. SAE, for its part, insists: "Our investigation to date shows no evidence the song was widely shared across the broader organization."

Although it has since been removed, the SAE national chapter, right there on its site, apparently honored its history of racist Southern values. For groups that center on tradition, reliant on recruiting new membership it pushes to carry that flag into 2015, there isn’t much internal scrutiny of these practices. (That said, a month after the video hit the headlines, SAE launched an initiative that included a national advisory committee overseeing racial inclusion, as well as a hotline anybody can call if they experience, or know of, any inappropriate incidents.)

Twitter exposed a closely held tradition with no place in modern society, hopefully setting into motion a profound change that even a protesting newcomers could not have achieved. By broadcasting it on the Internet, it gave the world a chance to weigh in.

Even still, real shift won’t come about from the headline formula: “XXXX fraternity does *insert horrible thing here*.” We are beginning to turn these incidents into spectacles, holding fraternities as the center of these fringe evils. But the internalized –isms that have come to light through rowdy frat bros are at play all around us, in every part of society.

No, you probably don’t hear something as glaring as the OU chant. And you probably haven’t seen pictures of unconscious, naked girls circulated for fun. But the attitudes that stoke actions like that are pervasive in your daily life. It’s time to expose them.

I’m not proposing Orwellian surveillance of fraternities or any other group. But I think that social media has given real power to interrupt carefully preserved silos of thought. Without the mass retweeting of the OU chant video, without the national conversation that followed, it is doubtful that the fallout would have resonated with such intensity. Social media allows voices that never would have never been a part of the discussion to echo through hallowed halls of institutionalism. It allows them to be on that bus. It allows them to be an effective disturbance to the conversation.