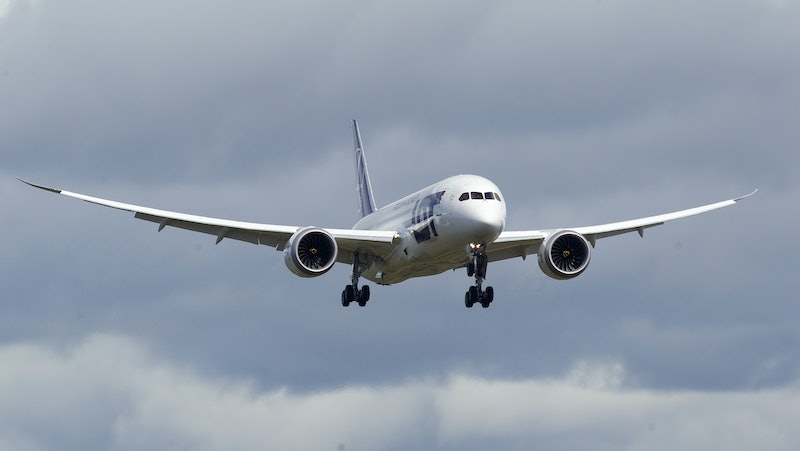 The aftermath of Tuesday's Germanwings crash probably has a lot of people scared to fly, and especially jittery when their plane starts to descend quickly. Flight 4U 9525 was intentionally downed by co-pilot Andreas Lubitz, who forced the plane to fall from a cruising altitude of 38,000 feet to just 6,000 in only eight minutes, causing it to crash into the French Alps. However, it's important to know that when a plane falls quickly, it is almost never about to crash. So, besides deliberate sabotage by a pilot, what else can cause a plane to rapidly descend?

According to CNN, transponder data shows that the Germanwings flight's autopilot was reprogrammed by someone in the cockput — presumably Lubitz — to fall from its altitude of 38,000 feet to 100 feet. Flight 4U 9525 fell at a rate of 3,400 feet per minute, while a normal descent happens at 1,500 to 2,000 feet per minute, The New York Times reports. On the other hand, a nose dive would be closer to a 8,000 feet per minute fall.

A sudden, drastic fall would be apparent to passengers, but it doesn't by any means mean the plane is doomed. Let's take a look at other reasons planes sometimes descend rapidly.

Sometimes in order to avoid strong turbulence, a pilot will ascend or descend to find clearer air. If your flight starts to get bumpy, and then begins to go down to a lower altitude, fear not — the pilot is trying to avoid further turbulence.

Although it rarely happens, if the cabin of the plane becomes depressurized, meaning the cabin air system that maintains air pressure at low altitude levels fails, the plane must descend to an altitude of 10,000 feet. Once the plane is stable, the pilot will make an emergency landing at a nearby airport. In the event that this happens, the plane's oxygen masks will drop down, and passengers should put them on to help their breathing. Cabin depressurization will not cause the plane to crash, as it only affects the air within the plane.

Look, this may seem obvious, but if you happen to nap through the pilot's announcement — or if he or she are late to announce that you're landing — check the time before panicking. If it's getting close to the flight's scheduled arrival time, the plane is probably about to land safely.

More like this
Boris Johnson’s Leadership Is In Question – Again
By Bustle UK
For These Abortion Clinic Volunteers, Going TikTok Viral Is A Risk Worth Taking
By Audra Heinrichs
5 Ways To Stand In Solidarity With Women In America From The UK
By Sophie McEvoy
How To Fight For Reproductive Rights, Based On How Much Time You Have
By Courtney Young
Get Even More From Bustle — Sign Up For The Newsletter