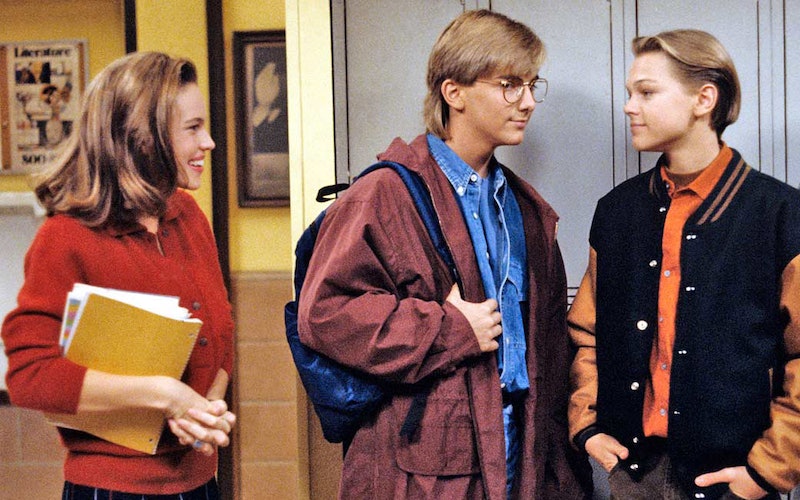 If you had two eyes connected to a beating heart in the late '80s and early '90s, then you remember the magic that was Growing Pains. And, if you love Leonardo DiCaprio despite that new beard of his, then you've probably heard by now that DiCaprio was on Growing Pains for 23 episodes in the final season. And you thought his part as Jack Dawson in Titanic was the most adorable and fresh-faced role he ever had, right? DiCaprio debuted on Growing Pains as the abandoned homeless teen Luke Brower, who was taken in by the Seaver family thanks to the efforts of Mike Seaver. (Thank you, Kirk Cameron!)

Now, let's be real. Those of you who were teens during that final season totally had a crush on Luke. Don't lie to me. He and Shawn Hunter of Boy Meets World could practically have had a competition based around Who Has The Most Beautiful Flowing Locks.

Although as an adult, I want to pinch Luke Brower's cheeks rather than swoon over him like I would over Jack Dawson, it's time to take a trip down memory lane to these six amazing moments featuring your '80s, '90s, '00s, and '10s crush: Leo.

1. The Time He Ruined Water Beds

When Mike found Luke sleeping on the floor, he tried to convince Luke that he could have slept in the Seaver family water bed instead. It was at that moment that Luke told us all a truth that we simply can't deny. "I don't like to sleep in a bed that might wet me," he said, causing an entire generation of people to take those water beds back to the furniture store. AND WISELY SO.

2. When He Was Not About That Doctor Thing

In that moment, Luke was all of us and all of us were Luke. Then again, according to him, "the last time I saw a doctor, he went poking around like a Turkish drug enforcement officer with an attitude." That's... a lot less relatable.

3. The Awkward Moment Mike Finds Out Luke Is Homeless

Did your heart break? Because my heart broke. If you don't want to be happy again for the rest of the day, feel free to relive the moment where poor Luke has to explain to Mr. Seaver why he's asleep in a supply closet. And, worse, he actually does try and explain it in a fast-talking manner that just somehow seems even more heartbreaking.

4. When He Caused All The Tears

When Luke's father, George, returns to town and wants to get to know him, Mike did not handle it well. Like, at all. It was one of the most heartwarming moments of the entire season, and I still can't watch it without tearing up. I like to think that Luke did come back one day, because he and Mike had the best relationship ever and I miss it.

5. When He Got Asked To The Dance

Ah, Cheryl. The connection between Cheryl and Luke was real, you guys, even if it took Ben, uh, quite some time to get used to the idea. In one of the cutest moments of the whole episode, Luke asks Cheryl to the Sadie Hawkins dance only for her to reply that it's supposed to be her who asks him. "Two words: Sadie Hawkins," she says as covertly as a spy. Luke thinks it over for all of two seconds before replying, "One word: yes." Too cute.

6. Behind the Scenes of Growing Pains

All right, so this didn't technically take place on the show. BUT CAN WE TALK ABOUT HOW CUTE HE IS? I am done. I am so done.