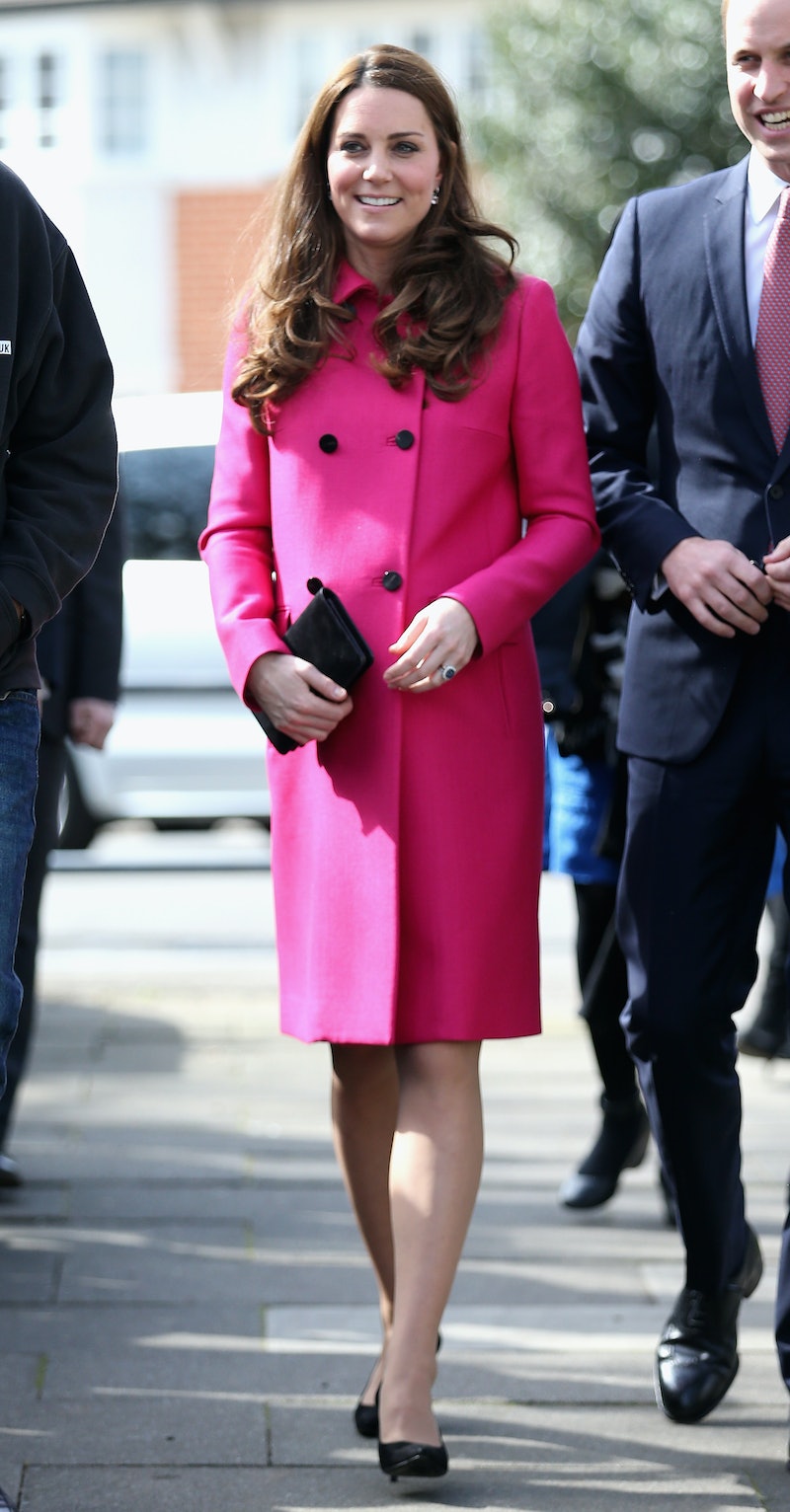 The countdown to blissful spring weather has officially begun, but in the United Kingdom citizens await a more momentous occasion: Kate Middleton's imminent due date. Is Kate Middleton having a girl, or will Prince George have a new baby brother? The Duchess of Cambridge officially bid adieu to the public before seeking rest and relaxation prior to the birth of her second child today, and in truly regal fashion, did so with sartorial aplomb.

However, Middleton's pregnancy has been somewhat of a protracted guessing game for members of the royal baby watch. As with her last pregnancy, Middleton has kept deliberately mum on the sex of her baby, which is undoubtably tormenting her devoted audience. Though there is no way to accurately predict the baby's sex, the public appears convinced that the royal family will have a baby girl by April's end. Perhaps the rumor stems from Prince William's public desire to raise a girl, but there seem to be other signs lurking in plain sight, namely, Middleton's wardrobe.

There have been several marked differences between Middleton's first maternity wardrobe and her second pregnancy's ensembles, and all signs seem to point towards a girl. Read on for five sartorial clues that Kate Middleton's little bundle of joy will be the world's next great female leader.

Mercifully, colors are becoming increasingly gender-neutral in 2015. However, Kate Middleton is now a member of the British royal family, a group which favors a combination of tradition and modernity. Middleton could have chosen any ensemble for her last outing before her due date, but the Duchess selected a brilliant fuchsia Mulberry coat. If Middleton's ensemble was meant to evoke conventional gender norms, it seems clear that Prince George will soon be a proud older brother to a little sister.

2. The Duchess Has Favored Shades Of Pink Throughout Her Pregnancy

Middleton's fuchsia coat was not the only pink garment she sported in her second pregnancy; in fact, the Duchess's wardrobe was spiked with fifty shades of rose, peach, and salmon hues. Perhaps the color choice is nothing more than a wardrobe revamp designed to enhance Middleton's expectant glow, but the pink palette could easily indicate a baby girl.

3. Middleton Is Carrying High And Her Ensembles Highlight It

According to Parenting Magazine, how high a woman carries her pregnancy may indicate the baby's gender. As Middleton appears to being carrying high, wisdom suggests her baby is a girl. Furthermore, Middleton's ensembles seem to highlight her pregnancy carrying position, from well-tailored shift dresses to frocks that emphasize her natural waist.

Instead of favoring only monochrome ensembles with little embellishment and few prints, Middleton has fully embraced traditionally feminine patterns in her second pregnancy. Cascading florals, bold animal prints, and multicolored polka dots have punctuated the Duchess's wardrobe over the past eight months.

5. Flowers Have Featured Prominently In Her Maternity Wardrobe

Aside from the bouquets of fresh blooms which seem to materialize for the Duchess at each public appearance, Middleton has also included countless flowers in her recent maternity ensembles. A crimson flower pin adorned a black coat, a verdant corsage was affixed to a similar topper for a recent engagement, and Middleton's hats have been a parade of bows and flowers. Perhaps the floral accents are a sign of a British baby girl in the monarchy's future.