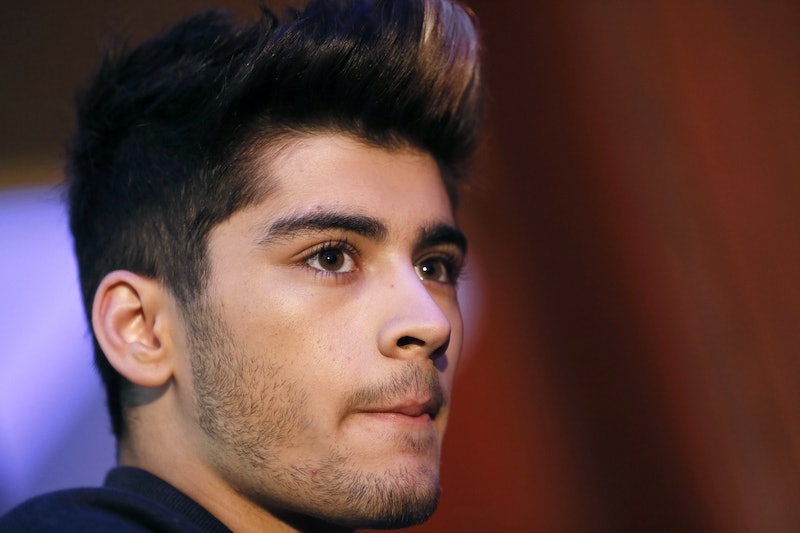 It's been hard to really know what to do with ourselves since Zayn Malik announced that he was leaving One Direction. On the one hand, it's really sad, and we'd like to stay in bed all day and ice cream about the fact that 1D is now a four-person band consisting of Harry Styles, Niall Horan, Louis Tomlinson, and Liam Payne, but on the other hand, it's hard to ignore how much happier Malik seems to be since quitting. In his first statement, the one they put on Facebook, he said:

My life with One Direction has been more than I could ever have imagined. But, after five years, I feel like it is now the right time for me to leave the band. I’d like to apologise to the fans if I’ve let anyone down, but I have to do what feels right in my heart. I am leaving because I want to be a normal 22-year-old who is able to relax and have some private time out of the spotlight.

And then today, he followed that up with a more detailed statement to The Sun, saying he was never totally happy in the group, and leaving is the best thing for him:

I've never felt more in control in my life. I feel like I'm doing what's right, and right by myself and right by the boys, so I feel good. The main message is just that I did try to do something that I wasn't happy doing for a while, for the sake of maybe other people's happiness. I only ever tried to do it for the fans, and it was only ever for them. I'm only upset [because] I feel like I may have let them down in some sort of way.

Oh, buddy! You don't need to feel like you let anybody down! Obviously it's tough to see that now, since you're so close to it, but don't take it from me, take it from your fellow celebrities who are offering their kind words of advice.

Jonas has experience of his own with parting ways with a popular group — the Jonas Brothers broke up in 2013 — and had this to say in support of Malik when speaking to E! News :

It’s always tough and there is never an easy time to make a decision like that. I commend him for doing what he feels is right for him and you have to stay true to yourself.

As always, Sheeran showed wisdom beyond his years in an interview on the Hughesy and Kate Radio Show:

I think...whatever makes him happy. The most important thing in life is to be happy, and if he was unhappy in that situation, then yeah, don't stay in it, you know? You don't want to make yourself unhappy just to earn money. That's not what life's about. You're meant to enjoy life. And if he wasn't enjoying his life, then...fair play to him.

She didn't call out Malik by name, so it's not official that she was speaking to Malik, but based on her time with the Spice Girls, there's a pretty good chance:

The 1D lads have never gotten along particularly well with fellow Brits The Wanted when they were a unit, but Sykes had some supportive things to say to Popcrush about Malik's decision:

I think their last album sounded brilliant. But I think when you're a percentage of a group, you've also just got to give yourself some time where you can be 100 percent for yourself. You've got to do the stuff that you always wanted to do and have fun with it, rather than be 20 percent of a boy band.

Cowell is the one who put the boys together on X Factor, so you might expect him to be disappointed in Malik, but it seems it's just the opposite:

And finally, this advice from Brand isn't for Malik, it's for his fans, but it's just as crucial that we all listen to and obey it, so have at ye:

I feel sorry for people; it must be really painful for them. [...] Zayn was an important member of 1D. He was the one who wouldn't dance. But it will get better and we've still got Harry, Niall, Liam, and Louis, so let's focus on what we got.

Thanks for your wise words, everybody! Let's all stay strong at this difficult time.