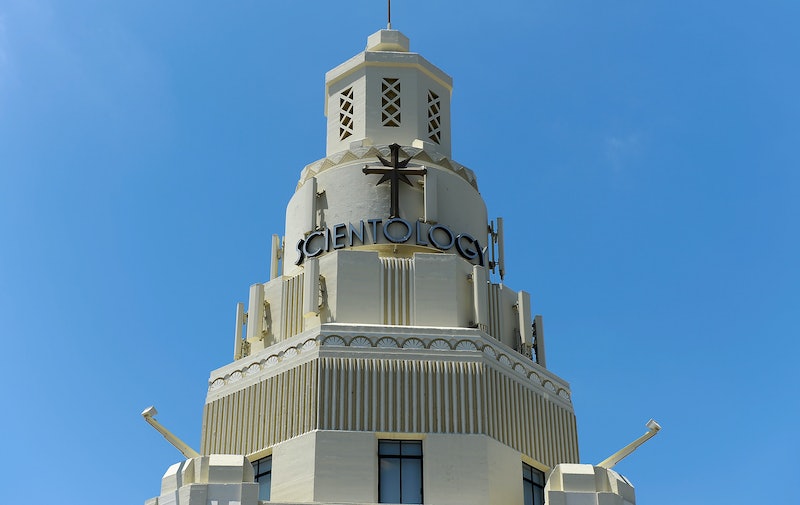 Get ready for filmmaker Alex Gibney's Going Clear: Scientology and the Prison of Belief, which is scheduled to air on HBO this Sunday. All the enthusiasm and interest it's generated has been matched in nearly equal measure by blanket denials by the Church of Scientology itself, and one glance at the text it's based on makes it easy to guess why. If you're excited for the film Going Clear, Lawrence Wright's 2013 book Going Clear: Scientology, Hollywood, and the Prison of Belief is an absolute must-read.

Even if you haven't seen the movie yet, a few hours curled up with its primary source material lays bare exactly what Scientology fears so much. There's no denying that even a book as successful and engrossing as Going Clear won't reach some media consumers in this day and age — film, on the other hand, is by nature a very visible and educational medium. And with Scientology's litany of alleged secrets apparently being exposed by the internet age, it's getting harder and harder for the notoriously tight-lipped Church to keep a lid on things. Here are a few of the most major, shocking allegations from the book, to help get you ready for the film's debut.

This is one of the most familiar and damning criticisms of Scientology, attested to over and over again in Wright's book, as well as others (Janet Reitman's excellent Inside Scientology, for example). For decades, the Church of Scientology has allegedly engaged in a practice known as "disconnection," in which families are broken apart when one member tries to leave the Church. (The Church has denied the practice exists.)

This, of course, would serve as a powerful deterrent to people getting out. Basically, if a father, mother, spouse, or child wants to leave Scientology, they can expect to get the cold shoulder treatment from any of their closest loved ones who stay behind, according to claims. Those who leave the Church are often labelled "suppressive persons," a typically dramatic Scientology way of labeling someone an evil apostate.

This practice doesn't just apply to family, either — friends, business associates, you name it, according to accounts. As Wright's book details, one of the things which eventually spurred director Paul Haggis to leave the Church was former Scientology spokesperson Tommy Davis' on-air denial of disconnection to CNN's John King.

Scientology Forces Women To Get Abortions

In Scientology, there are very different strata people can occupy. For someone like Tom Cruise, an A-list celebrity Scientologist, the view probably looks pretty sweet — you can pick up a tacky-looking medal here, an allegedly hand-picked girlfriend there, maybe a little alleged unpaid labor, and call it a day.

But if you're a member of Scientology's elite, most devout ranks, the Sea Org (short for Sea Organization), things are allegedly far worse. According to the book, Sea Org members live in toiling conditions, earning a dismally low amount of money for strenuous work — like $50 a week. And on top of that, if a woman becomes pregnant, she'll allegedly be under pressure to get an abortion. The Church freely admits that women in the Sea Org are not allowed to have children, but denies pressuring or forcing anyone to receive abortions.

Of course, some of the pressure is implicit. Sea Org members sign a billion-year contract upon entry (yes, really), and are consequently some of the most ardent, zealous believers in the faith. Having to abandon the post because you're pregnant is a clear message in itself. But some of the claims go way, way beyond implicit pressure, with multiple women attesting to alleged manual labor and punishments doled out as coercion.

Scientology Is Run By A Rage-Filled, Violent Abuser

The man pictured above is David Miscavige, the leader of the Church of Scientology. Drawing on interviews with hundreds of former members, Wright's book paints a picture of a rage-filled, serial abuser with a sadistic edge. (The Church has denied accusations regarding Miscavige's abuse.)The public hasn't gotten a long look at Miscavige since 1992, when he did an utterly disastrous interview with ABC's Ted Koppel. It won Koppel an Emmy, and according to Wright's book, Miscavige had a fake Emmy made for himself.

Since then, he's been accused of flying into rages and attacking other high-level members of the Church. And the book told another particularly horrifying tale: He allegedly forced dozens upon dozens of officials to play an hours-long, dead-of-night game of musical chairs to decide who got to stay working at their base in Hemet, Calif., and who would be shipped off to remote locations around the world. He even had plane tickets printed to drive the point home.

The stakes were allegedly so loaded that fights and scuffles broke out between the middle-aged victims of this little game. And make no mistake, a game was exactly what it was — after it was all over with, Miscavige allegedly didn't follow through on his threats. If this account is true, it suggests this exercise was more for his own entertainment than anything else, and that's horrifying.

Scientology Is Based On A Lie

Obviously, any faith's origin stories can be picked apart for factual accuracy. Did Jesus really rise from the dead? Was Abraham really ordered by God to slay his son? Did Muhammad really ride on a winged horse? By any empirical standards, the answers must be no. But as matters of faith, the sheer age of these stories breeds a sort of credibility — if Jesus had been born in, say, 1966, some of the more fantastical Biblical claims might not stand up as well. L. Ron Hubbard, the founder of the faith (though it was initially more of a pseudo-science), was born in 1911 and died in 1986, and as such his claims are easily subject to fact-checking.

Chief among them, the story that essentially launched the Church — Hubbard's tale of suffering debilitating injuries during World War II, and healing them through proto-Scientology methods (originally known as Dianetics). Wright details a conversation with former Church spokesperson Tommy Davis, who conceded that if Hubbard had lied about his war injuries, then the whole faith was essentially a lie.

And, sad to say for his adherents, the records Wright presented make the truth pretty plain: Hubbard lied about his injuries. In fact, some of the medals they claimed he'd received didn't even exist at the time.