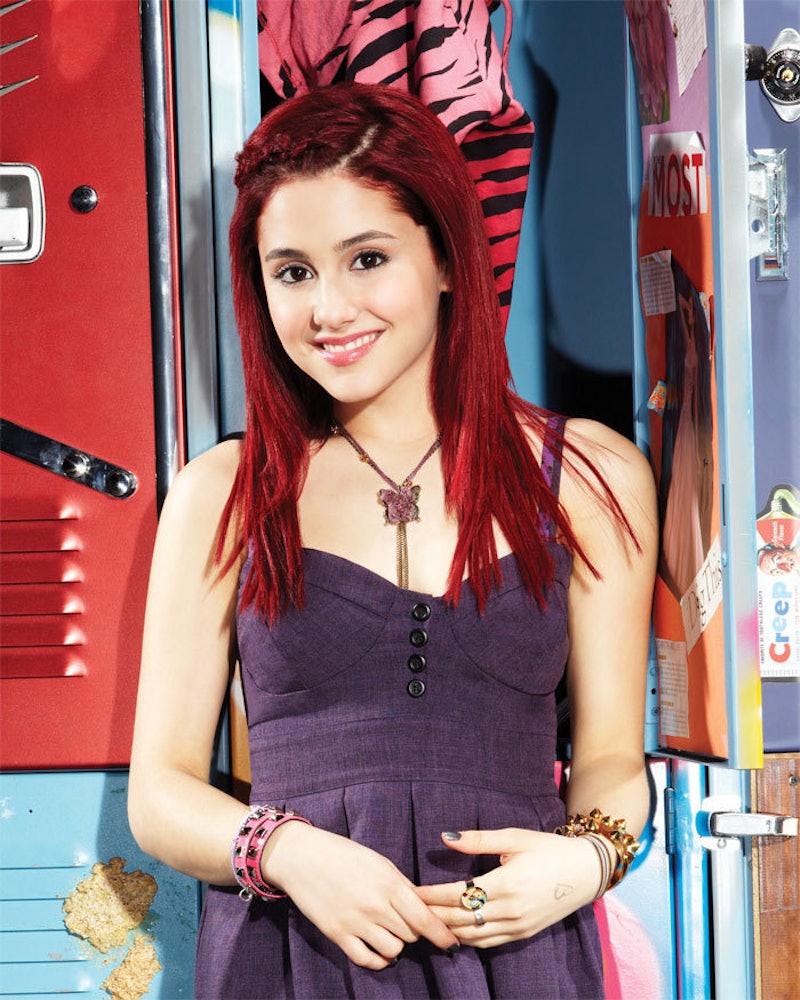 It has been exactly five years since the pilot episode of Victorious premiered on Nickelodeon, and those of us who watched the show will always remember where we were when it was canceled. Following Victoria Justice of Eye Candy fame under the name Tori Vega, it took place in an art high school called Hollywood Arts and was staffed by a colorful cast of characters — from the angry, gothic Mean Girl Jade West to the laid-back flirt Beck Oliver to the crazy, kooky, cute-as-hell Cat Valentine. And it is Cat Valentine that I wish to celebrate on this most special anniversary, for the sheer fact that Cat was the break out star of the show. Which we should have guessed in advanced, since she was played by pop singer Ariana Grande.

Before Grande was an internationally famous singer, however, she was a red velvet-haired cutesy woman-child who wandered around in her own world apart from the one that the rest of the cast existed in. Cat was a hilarious breath of fresh air, the one character on the show who was always hilarious even without the laugh track, and I had a hard time narrowing down the many, many moments that she proved it.

So settle in and relive the magic that was Victorious, back before we knew Cat Valentine by her stage name Ariana Grande.

1. That Time She Didn't Care What People Thought

2. That Time She Taylor Swifted At A Concert

She was awkwardly dancing long before Taylor Swift became known for it. Even better, she could awkwardly dance in life while still being able to bust a move on stage during an actual performance. (Just like Ariana Grande herself. I mean, I assume.)

3. That Time She Picked Her Battles

Picking fights with Jade West is never a wise course of action, but that didn't stop Cat from getting her moments of snark in. Where she could. However, she wasn't completely insane, so she kept such remarks under her breath where they belonged.

4. That Time She Defended Her Friend

5. That Time Her Best Friend Was Actually Jade

Everyone except Cat, apparently. While Jade refuses to admit that she's friends with the likes of Tori Vega, the sheer amount of time that she and Cat spend together — despite their wildly opposing personalities and Jade refusing to admit when she likes anything — makes it clear that the two girls are best friends. Cat tamed the beast, you guys. Move over, Beck.

6. That Time She Made This Face

Sorry, can't focus on the details of the episode because Ariana Grande is being obnoxiously adorable.

7. That Time She Made This Face

No one should look that cute while clinging on to your pant leg. No one.

8. That Time She Had Amazing Life Goals

9. That Time She Had A Dream

Cat has a lot of weird dreams, and has even weirder stories about the kinds of things that her mysterious brother likes to do with his time. In that way, Cat was the most hilarious character on the show. As well as the weirdest. But also the happiest, thanks to her habit of living in her own world.

10. That Time She Was The Ultimate Flirt

Victorious had a way of pushing the envelope when it came to characters' sexualities, and nowhere was that best seen than with Cat. She was a huge flirt, one who didn't notice that her friends were locked in an RV because she was busy having a bikini party with some guys on the beach and one who, in the bonus web episodes, often brings cute boys in for "interviews." It was nice to see a young woman subtly owning her sexuality, even on a Teen Nick show.

Queen Cat has spoken. Peasants need to fall in line.