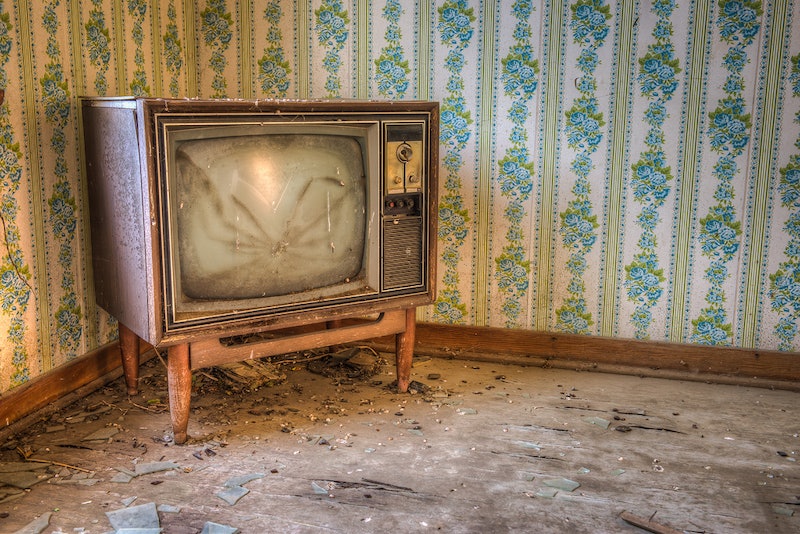 One of the things that makes creepypasta such an interesting variety of storytelling is how frequently the tales tread the line between fact and fiction. Take “1999” for example, with its discomfiting story of missing children and a questionable, locally-run television channel: It's so effective that it's difficult to say whether it really happened. But is the creepypasta “1999” actually real? Did Mr. Bear's Cellar or Caledon Local 21 really exist? You probably already know the answer… but just in case you're curious, let's dig into it a little bit. Here's the truth about Caledon Local 21.

“1999” takes the form of a young man's investigation into a supremely bizarre local access television channel he watched as child in Canada. The year 1999, Elliot writes on his blog, had a lot of firsts: He lost his first tooth, he went on an airplane for the first time… and he experienced things no one should have to experience at all, let alone at such a young age. At the time, you see, Elliot was incredibly interested in Pokemon; like a lot of young boys, he watched the show religiously at five o'clock every night. The only problem is that he could only ever watch one of the two episodes aired at a time, because his father watched the news equally religiously every night at 5:30PM. Eventually — probably because, Elliot theorized, he was sick of hearing his son complain every day — he bought the boy a small television for his room.

Elliot couldn't actually watch Pokemon on his dinky little room TV; it only got 20 channels, and Fox Kids wasn't one of them. In fact, his options were incredibly limited, with channel 2 — TVO Kids — being the only one he deemed worth his time… until he discovered local access channel 21. Broadcast from the town of Caledon, Ontario not too far away from the city in which Elliot lived, its official title was Caledon Local 21.

Elliot may not have known what local access TV was at the time, but he did know enough about what he was watching to understand that the quality wasn't particularly good. He was strangely fascinated by it, though, so he kept tuning into it anyway. Caledon Local 21 seemed to broadcast only a handful of shows, and it was only on between 4PM and 9PM. Elliot's recollections are hazy, but he recalls three shows in particular: Mr. Bear's Cellar, Booby, and Soup and Spoon. Mr. Bear's Cellar featured a man in a bear suit welcoming a new visitor — always a child — to his home in the cellar every day; Booby was some sort of puppet show, although the only “puppets” ever seen were plain human hands; and Soup and Spoon, which Elliot thinks might have been some sort of movie starring a soup can and a spoon.

It becomes apparent as the older Elliot looks into the mystery of Caledon Local 21 that something very, very wrong was going on back in 1999. Whether “Mr. Bear” acted alone or whether he also played “Booby” and all the other questionable characters wasn't clear; what was clear, though, is that “Mr. Bear” was a predator using his television shows to lure children to him.

And the reason this all came out?

As a child, Elliot wrote to “Mr. Bear” when the television show prompted him to.

His father, not suspecting anything was wrong, took him to visit when “Mr. Bear” told Elliot he'd love to have him on the show.

And that's when they learned exactly what was going on behind the scenes at Caledon Local 21.

There's much, much more to the story — including what happened when the older Elliot, having been too young to understood what the events of 1999 meant when they occurred, starts to try to figure out what exactly happened — and it's an incredibly convincing one, at that. But is it true?

Not so much. According to Know Your Meme, “1999” was written by Camden Lamont and first published at his blog, Slack LaLane, in 2009. It's easy to see how it might be taken for truth, though. Caledon is a real town, after all, so it's not outside the realm of possibility for a strange local access channel to have existed there in the late '90s. Furthermore, some people who grew up in the area recall watching similar low-budget local access shows that did actually exist. Some, taking the NoSleep subreddit credo of “while you're here, everything is real” to the extreme, even swear that they watched these shows in particular as children. (They're probably working within the story's fictional framework, of course, but it's still worth noting.)

But more convincing than anything else, I would argue, is this: “1999” isn't a supernatural or otherwise fantastical creepypasta. There are no ghosts, no ghouls, and no “spirit world” or “Other Side.” There are, however monsters — because monsters are real. People like “Mr. Bear” exist. Children do go missing; 41,035 children were reported missing in Canada in 2013. They don't all stay missing; but when they do — or when they aren't found alive — it's a tragedy every. Single. Time

That's what makes this story so frighteningly believable.

In the years since its initial upload, “1999” has become somewhat legendary. Many others who were inspired by the story have added to the mythos over the years, creating a full-on fan culture surrounding the tale: Stories have emerged from others who claim to have lost a loved one to “Mr. Bear”; websites have popped up trying to figure out what happened to Elliot at the end of his investigation; YouTube channels have begun reconstructing “lost episodes” of Caledon Local 21's mysterious shows; and someone even once began a Twitter account for Mr. Bear, although this account is no longer active.

The story is alive and well — and I've no doubt it will continue on for quite some time.

More like this
14 Scary Campfire Stories To Tell Your Friends
By Charlotte Ahlin and Kaitlyn Wylde
26 Ghost Story Podcasts To Get You Ready For Halloween
By Jessica Booth, Mia Mercado, JR Thorpe and Emma Carey
15 Easy Pranks To Play This Halloween
By Emily Kelley and Lauren Grant
'The Ex-Wife’s First Look Pics Are Giving 'Gone Girl' Vibes
By Bustle UK
Get Even More From Bustle — Sign Up For The Newsletter