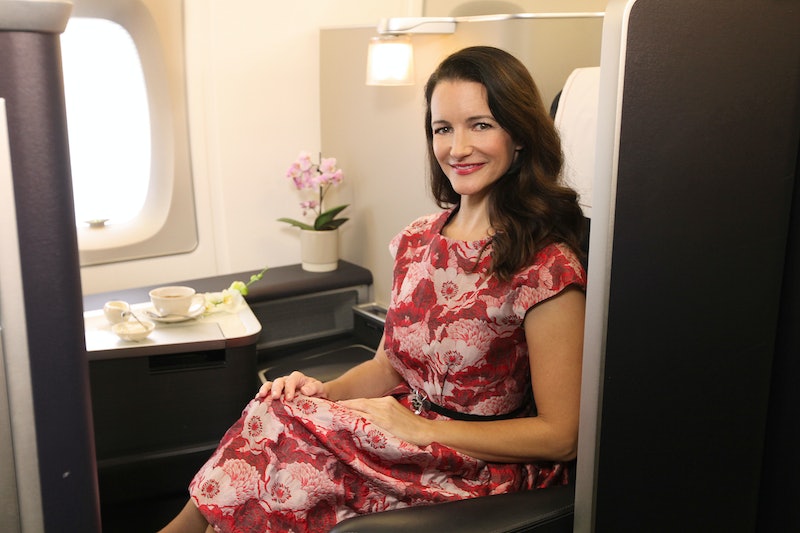 Before The Royals and even before Gossip Girl, there was a show on TV that provided stylish decadence and as a result, has had a lasting influence on us for the past 17 years. You know what we're talking about: HBO's Sex And The City. And before there was Queen Helena or Queen B., there was Charlotte York Goldenblatt. One would think that because I love fashion and I am a writer, naturally, I would grow up wanting to be like Carrie Bradshaw. It's true, her life is fabulous although many of her outfits and burning questions as a journalist are riduculous at best. However, it's pretty much guaranteed that if I were to take a quiz "Which Sex And the City Character Are You?," all answers would definitely point to Charlotte. Hands. Down. Even my own mother put Kristin Davis' most famous character on a list of women that included Audrey Hepburn, Jackie O., and Coco Chanel, entitled "Ladies to Live By." (I would also add Blair Waldorf to that list and perhaps Queen Helena, although she still has got more work to do since It's only been about three episodes.)

This past Wednesday, SATC star Sarah Jessica Parker turned 50. This event in our history almost broke the internet with stories flooding your newsfeeds with the title "[Insert Number] Times Carrie Bradshaw Was The Best SATC Star." Yes, I understand that it was SJP's birthday and so she should be remembered and celebrated for her most iconic work, but let's be honest: some of her looks were just plain weird. I'm not saying that Charlotte didn't wear some weird things, like that time she wore a Lilly Pullitzer pencil skirt with white tennis shoes. (Fun fact: Lilly Pullitzer was also my choice for my Sweet Sixteen dinner dress in a similar color to her skirt, so I still think its fabulous). Even though we each may have gotten it wrong a handful of times, there are many times that Charlotte York got it right and as a loyal Charlotte fan, I have done my best to repeat her accomplishments. Here are 5 times Charlotte York Goldenblatt got it right.

1. That time she channeled Elizabeth Taylor

This was a critical episode for Charlotte. It was the perfect example of how you shouldn't underestimate the power of a really good outfit on a bad day. If you don't remember this episode, Charlotte had been trying to get pregnant and she had a miscarriage, during the same weekend of Brady's first birthday party. Depressed and dejected, Charlotte stayed home and watched an E! True Hollywood Story about Elizabeth Taylor. After, feeling inspired by the woman who became her idol that day, Charlotte got dressed in this ensemble and went to Brady's birthday party. Brady may not have remembered it, but Miranda definitely did.

2. That time she entered Elizabeth Taylor in a dog show and looked fabulous doing it

As much as I am a fan of Charlotte, I am also a fan of her dog. Charlotte had a Cavalier King Charles Spaniel that she named Elizabeth Taylor. I love to watch the Westminster Dog show and I have to say, most of the handlers probably wish that What Not To Wear was still running on TLC so that someone would nominate them because none of them ever look as stylish as York did running around the floor.

3. That time she married Harry

How could you not love her wedding dress?! Every SATC fan knew that it was very hard for Charlotte when her picture-perfect marriage to Trey did not work out. The second time around, however, York definitely got it right — and I mean that both in regards to the man and the dress.

4. That time she wore black to a wedding

No one could possibly look more elegant breaking one of the oldest fashion rules ever. Enough said.

5. That time she cursed the day Big was born while wearing polka dots

This is my favorite Sex and the City scene of all time. I have often thought about what I would say to men who have hurt me or my friends if I were to ever see them again. I hope that if it ever happened, I would have as much grace and style as Charlotte did! Her choice of words and ensemble could not have been more perfect for this moment. Charlotte York Goldenblatt, lady that she is, would curse the day you were born while wearing polka dots and a pink trench coat. Of course she would.

Images: Sex And The City/HBO