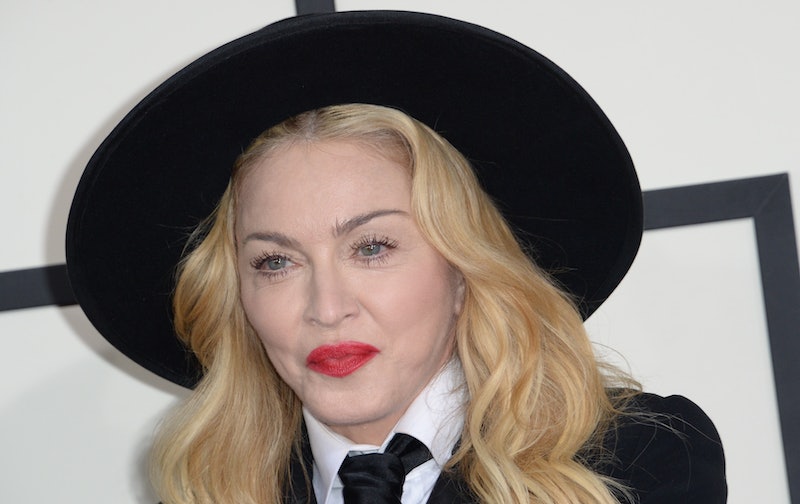 According to my mom, my 80s child self was borderline obsessed with the Madonna movie Desperately Seeking Susan back in the day. I doubt I totally grasped the plot — a bored housewife (Rosanna Arquette) and a con artist named Susan (Madonna) switch places and clothes due to a case of mistaken identity — but I did go around trying to rock Susan's lace gloves, cool hair, and outfits. Another thing I didn't grasp was how many now famous people were in the movie. Desperately Seeking Susan was written by a rookie screenwriter named Leora Barish, was made for merely $5 million and the movie came out in 1985 as a total hit. The film also helped solidify Madonna as a superstar.

I know, it's hard to think of a time before Madonna was, well, Madonna, but before her album Like A Virgin was a smash hit, she was actually mistaken for Cyndi Lauper. "On the first day, when Madonna walked down the street, only a few people turned their heads," Desperately Seeking Susan director Susan Seidelman told Yahoo. "By the last week of shooting, Like a Virgin had dropped and we needed security." The movie itself became a hit as well, grossing $30 million domestically.

We all know Madonna starred in the movie, but here are five other people you may have forgotten were in Desperately Seeking Susan.

You know now him as Gus Fring, the fried chicken-selling and meth slinging from Breaking Bad, but back in 1985, Esposito played a Street Vendor in Desperately Seeking Susan. Credited as nothing else but "Street Vendor," Esposito appears about 20 minutes into the movie wearing a crop top and trying to sell Arquette's character Roberta on a hat and sunglasses, but she's too obsessed with following Susan. When Roberta fails to return the hat and sunglasses, Street Vendor yells at her chases her down to get his merch back.

It's a good thing for Roberta that he wasn't Gus Fring back then.

Before he was a regular in Coen Brothers movies, Turturro played Ray, the master of ceremonies at the Magic Club in Desperately Seeking Susan. Halfway through the movie, he awkwardly opens the show in a tux at the club and introduces a magic act called "Vida, Queen of Night."

This Emmy-winning actor had a small role in the movie as Guy From Brooklyn, a voice-only role in the Magic Club. That's it. Badalucco went onto play more small roles in movies, and then broke out when he won an Emmy for his role as Jimmy Berlutti on the ABC drama series The Practice in 1999. Badalucco has also guest starred on Netflix's Lilyhammer, HBO's Boardwalk Empire, and NBC's Law & Order: Special Victims Unit.

Today, she plays the nearly mute Norma Romano on Netflix's hit series Orange is the New Black, but back in 1985, Golden played a singer in a band — or as she's credited, "Band Singer."