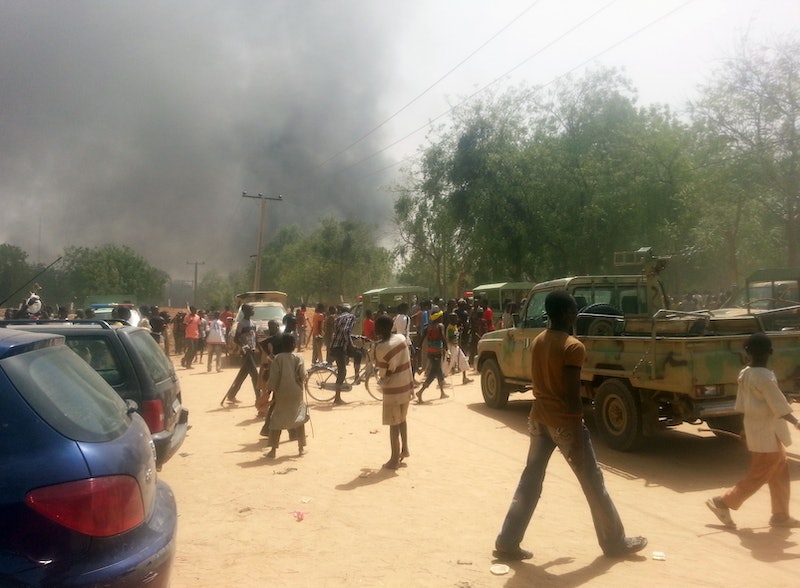 After Nigerian officials postponed a February 14 presidential elections, in an effort to avoid endangering voters by putting them in the path of Boko Haram militants, it was expected that the chaos might die down — but with the group's most recent actions, it seems authorities' efforts may have been fruitless. Early Saturday, as citizens began making their way to cast their ballots at local polling stations, Boko Haram gunmen began forcing voters away from at least two separate locations at gunpoint, threatening to kill anyone who remained. The group had stated previously that it would do everything in its power to avert what they believe to be a "corrupt Western concept", reported the Associated Press on Saturday.

While attempts at stemming the tide of terrorist activity in the country's northeast region have so far been marginally successful, the group's presence could still be heavily felt throughout embattled veins of the populated West African nation. A report out of Reuters on Saturday showed that the group had already killed six people total by early afternoon in the Ngalda, Yobe and Woru, Gombe regions, opening fire on the crowds of people headed to the polls. The Independent National Electoral Commission's website was also hacked on Saturday, a note left on the site reading "Struck by the Nigerian Cyber Army!" parlaying a visible but non-detrimental threat. Officials told the AP that the site held no sensitive information.

On the ground, poll analysts told AP reporters that the situation, which was too close to call as the day dragged on, was already tenuous. Biometric voting cards were not working, polling officials explained, and even incumbent President Goodluck Jonathan ran into frustrating voting issues when both his wife's and his own fingerprint IDs would not read. Many complained that the exasperatingly slow system would not allow for all voters to be able to cast their ballots.

"I appeal to all Nigerians to be patient," said Jonathan in a comment to Channels TV, "no matter the pains it takes as long as if, as a nation, we can conduct free and fair elections that the whole world will accept."

Speaking with NBC News reporters earlier this week, IHS Jane’s Terrorism & Insurgency Centre (JTIC) managing editor Matthew Henman explained that the spontaneous intimidation tactics used more recently by Boko Haram militants were not wholly unexpected as the conflict drew on, and worried that sporadic attacks on Saturday's voters, like the shootings at the two polling locations, were likely imminent.

What we are seeing is Boko Haram transitioning away from the kind of attacks it has carried out in the past 18 months, where it raided towns and villages and killed civilians indiscriminately. The group is now switching back to the kind of guerrilla operations we saw from it previously.

There are going to be situations in a lot of these [polling] places where there are large numbers of people coming into town, and they are going to make very, very inviting targets for suicide bombers.

The looming threat of violence during Saturday's elections wasn't enough to keep determined voters from casting their ballots, however. In some of the more rural areas of the country, explained Independent National Electoral Commission spokesman Kayode Idowu in an interview with NPR News, it's the first time citizens will even have a chance to make their voice heard, despite the din of terrorist threats.

"There are areas of the country you have to approach by donkey or camel or bicycle, or by footpath," he said. "There are remote areas like that. Before now, they never saw the color of a ballot box or ballot paper. Now they cast their votes there."

Update 7:00 pm ET: The Associated Press reported on Saturday evening that Boko Haram militants had killed 39 additional people, one of whom was a Nigerian legislator. The attacks occurred in the country's northeast region. The AP reported that militants had torched homes in the town of Miringa and shot those attempting to flee the scene. In Gombe state, legislator Umaru Ali and 13 others were killed in an attempt by the terrorist group to dismantle Saturday's presidential elections.