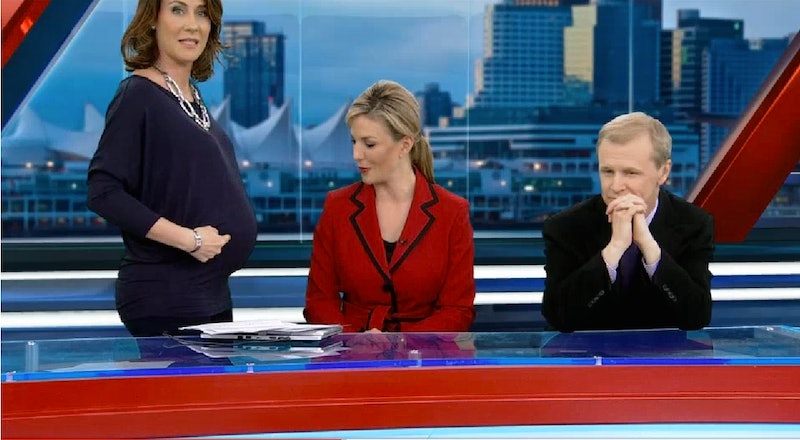 These days, it seems that every scroll through our timelines brings another incident of body shaming. The latest case is truly heartbreaking, as a meteorologist has been shamed for her pregnant belly. This phenomenon is exhausting. It is frustrating. And it seriously needs to stop.

Kristi Gordon is a meteorologist for Canadian news broadcast Global News. In January, after the announcement of her second pregnancy, she asked viewers to "not get upset about what I wear during my pregnancy." Unfortunately, that request was not met, with Gordon sharing this week the hate mail she has received while expecting her second child. Instead of being silent about her pain, Gordon decided to use some air time to share the blatant ignorance filling her mailbox.

Buy some decent clothes and have more respect for your unborn child.

Looser tops would be much more professional.

Seriously, who are these people and who hurt them so badly that they feel the need to be horrible to a woman they've never met?

This all comes as no surprise to Gordon, who says that the same negativity was thrown her way when she was pregnant with her first child. She even laughed while reading the comments aloud during the news segment, and her fellow news anchors decided to fire jokes right back at the viewers by calling out spelling errors and other discrepancies, saying "haters gonna hate." But obviously that doesn't make it any better. Gordon says that "even if you're joking about something, it sinks in at some level."

Even though their jobs aren't to be flawless, female newscasters are often subjected to a harsh level of scrutiny when it comes to beauty standards. Not too long ago, a news anchor was fired for defending her natural hair. Last year, a BBC show suggested improvements to its female anchor's clothing, hair, and mannerisms, so that it could pick up more viewers (the male anchors that worked alongside her weren't subjected to the same treatment). There was also that one time a male news anchor revealed that he had been wearing the same suit on air for a year and no one noticed. His point was to prove that female anchors aren't judged by the same professional standards as men. Go figure.