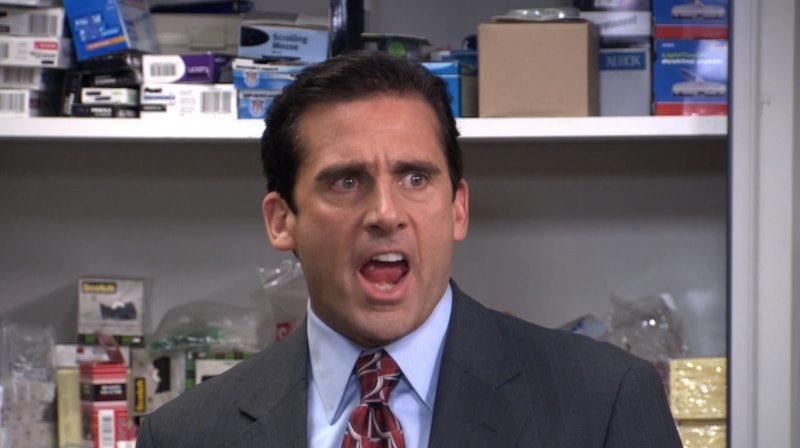 We've all been there: Seeing the guy at work who always has a "hilarious" joke approaching in the hall with no way to escape and...ahhh, now he's made eye contact and you'll never get away. Get that fake laugh armed and ready. It's kind of the in-person version of the guy who sends jokes and funny gifs you never asked for via email (always with a million "fwd: fwd: FWD"s in the subject line like it's 1998 and we all just got our first trial versions of AOL). But the guy in this video, with Australian accent and wearing sunglasses indoors just keeps going, telling bad pun after bad pun to his coworkers, none of whom seem A) all that busy or B) in any great hurry to get away from him. And he's annoying. He must say "HEY ANDREW" and "HEY STEVE" about 100 times. At least it starts to feel that way. They are the kinds of jokes you might hear from 4th grade boys. A couple of examples (try to hold your eye-rolling until the end):

Hey Andrew. I used to go out with a girl who had a taser gun. She was stunning.

Hey Steve. Did you hear about that Mexican serial killer? He had locomotives.

Hey Steve. Did you read that book on anti-gravity? It's hard to put down.

Hey Andrew. I just got a job crushing cans. It's soda pressing (so depressing).

Ugh, be funnier, guy who still shoots vertical video with his cell phone. (Seriously, the YouTube commenters seem more peeved by the video orientation than the guy's terrible jokes, tbh.) If you're going to make this your Thing at work—like the lady who always has a candy dish, or the guy who always forgets his email password—you gotta try harder than this.

And since the humor is at the barely-juvenile level, there is, of course, the prerequisite small penis joke. Also just not that funny. So how do you handle the co-worker who needs constant validation for their terrible jokes? You could be nice and just chuckle politely and hope they go away and let you get back to work, which is what most of us end up doing. Sure, there are worse things to deal with in the workplace. And again, this guy's coworkers don't seem overly bothered by his "humor."

Side note: This vid is all over the internets, isn't our jokester friend at all concerned that his bosses might look at it and say "perhaps he needs more to do during the day, because he's clearly not busy enough"? Just a thought.