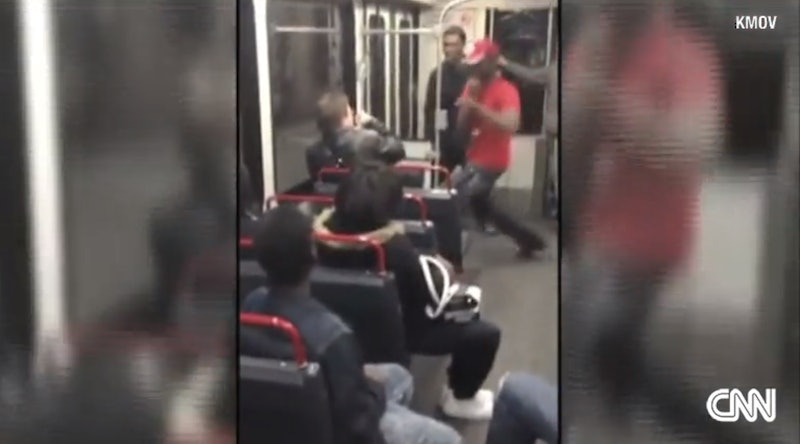 MetroLink passengers in St. Louis expressed concern this week after video and surveillance camera footage surfaced of three young men beating another man for refusing to discuss the Michael Brown case. The original video, which was shot on Monday night and posted to Facebook afterward, has raised the question of railway security and prompted a flurry of concern over racial tensions and backlash. Police confirmed on Friday evening that the viral images and posted footage had come from Monday's attack.

The victim, a 43-year-old white man who requested not to be named in the media, indicated that he had been sitting by himself when one of the young men approached him and asked to borrow his cell phone. When he refused, the man allegedly began asking him about his opinion of the Michael Brown shooting.

"He asked me my opinion on the Michael Brown thing," the man told CNN affiliate KMOV on Friday. "I responded I was too tired to think about it right now." The victim said that when he declined the offer to talk about the August 2014 shooting of the unarmed black teen, the young man (presumed to be between 20 and 25 years old and wearing a red cap and shirt) stood up and began beating him.

"The next thing I know, he sucker punches me right in the middle of my face," said the victim, who shielded himself with his forearms. After a few moments, the video shows the two other young men joining in, throwing punches and laughing before exiting the train at the next stop. The victim suffered multiple bruises and lacerations to his nose and forehead.

Images and descriptions released by police show that all three assailants were young black men between the ages of 18 and 25. In a region of the country where racial tensions have run high in recent years, the video does nothing to quell the anxiety of the city's diverse residents.

"What I saw ... on the news with that young man [beating the older man] — that's just crazy," one MetroLink passenger told KMOV reporters. "[Just] because he didn't want to answer something about Mike Brown? Come on now."

Some have questioned whether MetroLink officials have done enough security-wise to prevent incidents like Monday's beating from happening.

"There was a platform security officer on the platform when [the three young men] got off [the train]," said a MetroLink spokesperson on Friday. However, there was no security officer "on that particular car at that particular time" she explained in a statement. The spokesperson also indicated that there are usually around 50 separate security and law enforcement officials on duty at any given time.

What surprised the victim about the incident the most was the fact that none of the other train car passengers bothered to help, he said.

"I think it was disgusting that no one [helped]," he told the CNN affiliate. "People were sort of laughing and smiling about it. No one offered to help and no one attempted to call 911."

Police are still searching for the three men and have asked all regional travelers to keep an eye out. Meanwhile, St. Louis alderman Antonio French, who has been an outspoken supporter of the Ferguson demonstrations and civil rights protests, called the actions "disgusting."

"We have a major problem, STL," he tweeted on Friday.