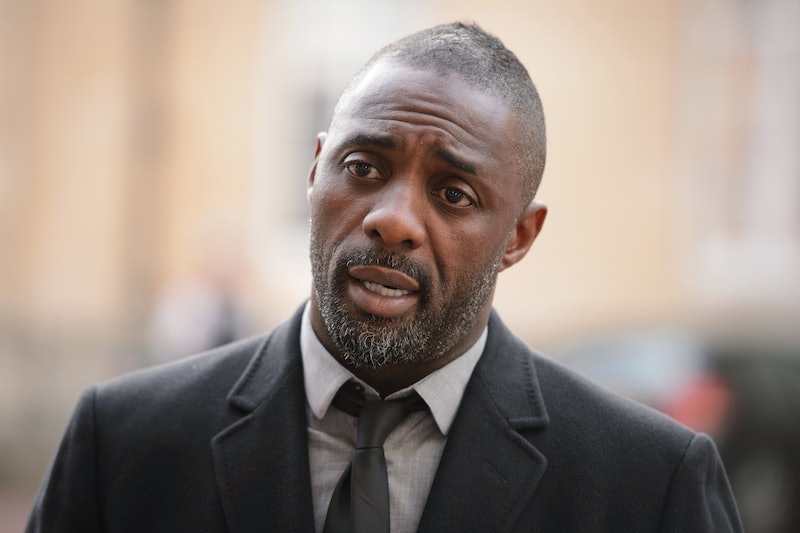 The prospect of Idris Elba as James Bond has caused way too much controversy, and for no good reason (I don't quite understand this, because obviously it would be awesome) — and now it seems there's even more. While former 007 actor Pierce Brosnan has endorsed the prospect of Elba as Bond, another former Bond actor, Roger Moore allegedly commented that the British Idris Elba can't be Bond because he's not "English-English" — whatever that means. This, for good reason, caused a stir on the internet, especially on Twitter.

Here's the full quote, courtesy of The Daily Mail :

A few years ago, I said that Cuba Gooding Jr. would make an excellent Bond, but it was a joke! Although James may have been played by a Scot, a Welshman and an Irishman, I think he should be "English-English"...Nevertheless, it's an interesting idea, but unrealistic.

Yikes. Not only is that statement pretty offensive, but it's also just downright confusing: Elba was born in Hackney (a borough of London), and he grew up in East Ham, a neighborhood in the London Borough of Newham. That's pretty English, no?

Luckily, however, it seems like the quote may have been taken out of context: Now, Moore is denying that those words ever came out of his mouth. The quote came from an interview with the French Magazine Paris Match, but Moore has claimed on Twitter that his actual words were "lost in translation." He tweeted: "An interview I gave to Paris Match implies I said something racist about Idris Elba. That is simply untrue. #Lost in translation." In addition to this being a weird use of the whole hashtag concept — #Lost — this is quite an accusation.

In some ways, these alleged comments are really just more proof that Elba should be Bond. Even if Moore is telling the truth and didn't mean for those comments to be about Elba — remember, he copped to making comments, but he just said he stopped at "English-English," and made no references to Elba — it's still pretty telling that a magazine would report they were about Elba regardless. The concept of Elba as Bond is interesting, and quite frankly, game-changing: For one of the most classic characters in history to be portrayed by a black actor for the first time ever would be a huge deal.

So many people have said ignorant things about Elba playing Bond — Rush Limbaugh said something similar to Moore's alleged quote — that this sadly didn't come as a huge surprise. However, it would be a huge disservice to pin this on Moore if he didn't really say it, as well as an awful cover-up if it really was true. At this point, seriously, can we just give the role to Elba so he can prove all the naysayers wrong once and for all?