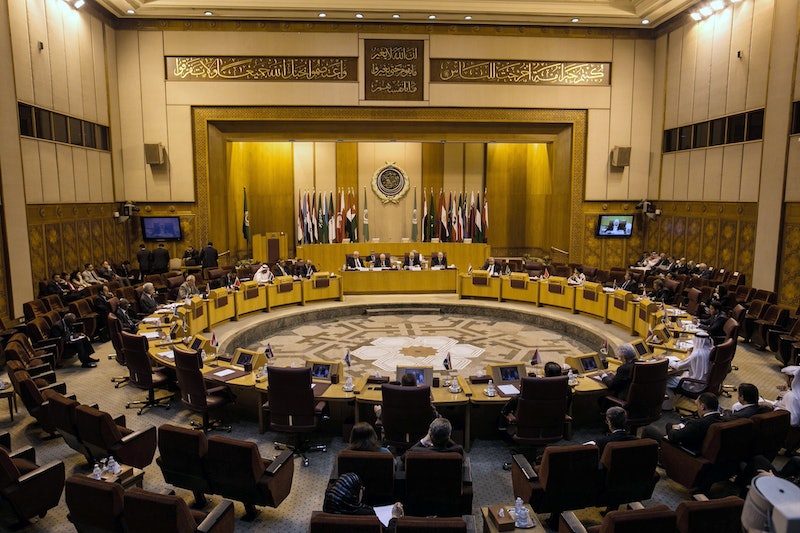 Arab leaders meeting at a summit in Egypt have agreed to the creation of a unified military force to respond to instability in the region. Egyptian President Abdel Fattah al-Sisi suggested the Arab security task-force, according to Reuters, and the idea was quickly met with unilateral support despite reservations. The 26th Arab League summit is convening at a time of ramped-up hostility; this week, ongoing conflict in Yemen between the elected government and ascendant Houthi rebels prompted Saudi Arabia to hurriedly assemble a regional military alliance and conduct air strikes against rebel positions.

The summit, held in the southern resort town of Sharm al-Sheikh, brings together the heads of 14 of the League’s 22 member states. The participants’ final communiqué called for “coordination, efforts and steps to establish an unified Arab force,” designed to intervene in conflicts such as Yemen’s. In his closing remarks Sunday, President Sisi announced that establishing the multilateral force was “essential in facing the current threats.” Sisi characterized those threats as an “unprecedented” challenge to the region’s “identity and Arab nature,” according to Egypt’s state-owned newspaper al-Ahram. But as Middle East Eye points out, no specifications have been made regarding the types of threats that could precipitate deployment.

Earlier this month, Arab League Secretary General Nabil al-Arabi highlighted the need for such a force to deal with the “dangerous situation” the region now found itself in. “Consideration of this issue should be based on the collective responsibility that we all have — as states and peoples — regarding the serious challenges we face,” al-Arabi said at the time. Since then, the regional situation has deteriorated further.

On Thursday, Saudi Arabia began bombing Yemen, in a series of multilateral airstrikes designed to halt the Houthis’ advance. The attack — supported by a regional coalition of ten states and carried out with the “logistical and intelligence” assistance of the United States — came too late for beleaguered Yemeni President Abd-Rabbuh Mansour Hadi. The rebels' push south forced Hadi to flee by sea from his provisional seat of government in Aden. He went first to Riyadh, and then on to Egypt to attend the conference.

Aside from the Yemen meltdown, Libya is in a prolonged state of collapse, while Syria’s civil war is entering its fifth blood-soaked year and Egypt itself is grappling with militant insurgencies with links to ISIS. The dire social and economic conditions (and incipient chaos) in many Arab countries provide fertile soil for the further growth of dangerous extremist ideologies. Moreover, the U.S.-led nuclear negotiations with Iran have spurred concern over Shiite-majority Iran’s expanding regional influence: the Islamic republic is reportedly supporting the Shiite Houthi militia, as well as masterminding anti-ISIS strategies on the battlegrounds of Syria and Iraq.

King Salman of Saudi Arabia told the summit that the regional “bloodshed” was “the inevitable result of an alliance between terrorism and sectarianism.” In a clear reference to Iran, he stated that it “is led by regional powers whose blatant interventions in the Arab region have undermined security and stability.” The recent Saudi strikes against the Iran-supported Houthis have commentators warning of the increasingly sectarian nature of the regional conflict, between the Shiite Islamic Republic and its proxies, and the Sunni Arab powers.

On Sunday, President Hadi accused Iran of destabilizing Yemen, referring to the Houthis as “stooges of Iran.” Saudi Arabia confirmed that the airstrikes would continue until the country is “stable and safe,” according to BBC, after a fourth night of bombings rocked various Yemeni cities. On Saturday, Abdel Mon'em al-Qurashi, a senior member of the Houthis’ ruling body, threatened to conduct suicide bombings in Saudi Arabia if Riyadh persisted. On the ground, clashes between Hadi-loyalist tribesmen and the Houthis left dozens dead on Sunday morning. The Arab League summit’s closing statement endorsed the Saudi airstrikes, instructing the Houthis to “immediately withdraw from Sanaa, government institutions, and give their weapons to the legitimate authorities.”

A unified Arab fighting force will certainly have its hands full. Despite Sisi's promises to establish the force as soon as possible, Reuters reports that it could take months to nut out the logistics. The agency also notes that previous similar schemes have failed to produce results. According to Al-Arabiya, the proposed military force would be voluntary and would respond to specific requests for assistance from member states.

Arab League countries have expressed some reservations about military intervention in regional conflicts. Iraq called for “serious discussion” on the appropriate path to peace in Yemen, pushing negotiations as the best way of averting civil war. “Foreign interventions will not help the Yemeni people,” said Iraqi President Fuad Masum. Algeria and Morocco also emphasized that much work had to be done on the specifics of the allied task-force.