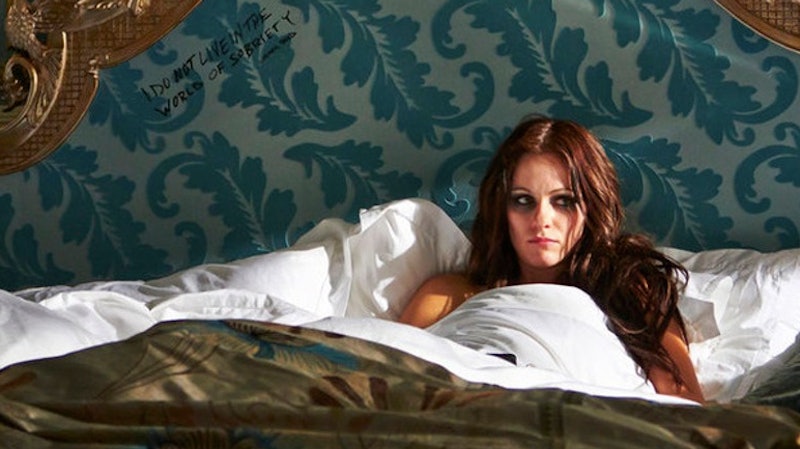 If you've been watching E!'s new, and first, scripted drama The Royals, then there's a good chance a certain character has struck you as familiar. No, I'm not talking about Elizabeth Hurley's Queen Helena, who reminds me of Lisa Vanderpump if she became evil and even more powerful. Nor am I talking about Prince Liam played by William Moseley who, honestly, probably just reminds you of the Narnia movies. Instead, I'm talking about Alexandra Park's character Princess Eleanor who is Effy Stonem from Skins .

OK, they aren't literally the same character or even the same actress (Effy was played by Kaya Scodelario for the record), but these two have so much in common that watching Eleanor on The Royals is like watching Effy 2.0. Ya know, if Effy discovered her secret royal ancestry rather than her secret calling as a stock trader. (People who watched Skins Fire know what I'm talking about.)

It was clear within five minutes of The Royals' first episode that Eleanor was a rebel — I mean, the girl showed up at her family's palace passed out in a helicopter after a wild night out. Sure, she's not quite as extreme as Effy (at least, not yet) and, clearly, she didn't start out as another character's mute younger sister. But there are a number of qualities these two have in common.

I've gotta start with Effy and Eleanor's style. They both love short party dresses, black clothes, and a whole lot of smudgy eye makeup. To bring in another dramatic lady of TV past, they way they dress is like if Blair Waldorf tried to be punk: edgy, but way too put together to actually qualify as punk. And in Eleanor's case, with shoes that probably cost as much as most people's rent.

If you're a Skins fan, you know that the way Effy carried herself was weirdly magnetic. She had a strut to her walk and an intense way of looking at things with her giant eyes that made you question why you were so drawn to such a self-destructive (and, really, just generally destructive) person in the first place. Eleanor is similar. Just look at the way she sips that stolen bottle of wine. I say these two have a sullen flair to them. Or a depressed pizzazz. Yeah, something like that...

These two LOVE going to clubs. Sure, Effy's exploits are a bit more intense — we're talking raves with hard drugs versus Eleanor's dancing on a Parisian club tabletop here — but they're both unapologetically wild. And again, this is so far. Eleanor still has plenty of time to turn her parents' house into a 24-hour party and drug den while they're on vacation and end up having a psychotic break.

I wouldn't call Jasper, Eleanor's bodyguard turned dude-she-has-sex-with-who's-also-blackmailing-her, her boyfriend exactly, but it's definitely an unconventional relationship. On the other side of things, we have Effy who basically dated two best friends, Cook and Freddie, on rotation.

The Way They Rebel Against Their Families

Effy has a pretty average middle class English family and Eleanor, obviously, is royalty, so they're pretty different in that sense. But still, both rebel against their families. In Effy's case this seems to be because of some pretty deep psychological issues (she did see her brother nearly die after getting hit by a bus, after all) and leads her to do things like a ton of hard drugs and turn her parents' home into the aforementioned party cave. As for Eleanor, she flies out of the country to go to clubs, is a real jerk to her mom, THE FREAKIN' QUEEN, who is also a jerk herself.

I imagine Eleanor's road down the path paved by Effy is only going to get more extreme (although, I can't say enough, hopefully not as extreme), so we'll just have to wait and see what happens. I imagine it will involve a ton of smeared eyeliner.