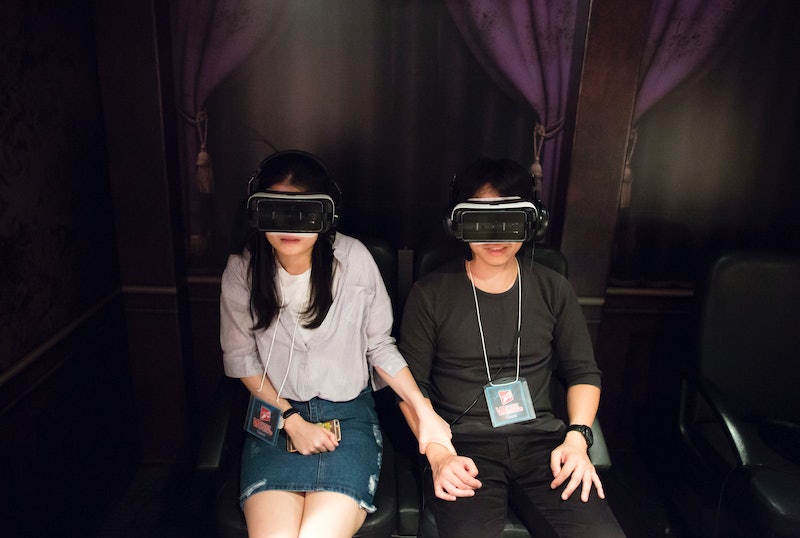 For more and more of Japan's 126 million citizens, sex is apparently " mendokusai " — more trouble than it's worth. The nation is currently facing a population crisis, and things aren't looking good as growing numbers of Japanese are shying away from conventional relationships: According to a survey conducted by Meiji Yasuda Life, a Japanese life insurance company, 30 percent of Japanese men in their 20s and 30s have never even dated a woman. For Japanese women, 30 percent of those in their 20s had no dating experience with men, although that number fell to 15 percent as they entered their 30s.

But it's not just dating that's getting left behind. In a 2012 survey, forty-one percent of married couples reported that they hadn't had sex in a month. That figure actually comes in lower than other estimates, which have posited that between 40 and 50 percent of Japanese marriages are sexless. And things didn't look much better for unmarried couples: 30 percent report not sleeping with their partner in the past month, and only 10 percent had sex more than three times a week.

"Most of the women I see are women who are already married, and who were wither[ing] in sexless relationships even when they were dating, or women who first had sex after they got married and then found that things weren’t going well," counselor Dr. Souda Satoru said.

The study comes at a time when Japan's population is declining at huge rates — its population in 2060 is estimated to be 30 percent lower than it was in 2010. And those who are having sex are being really careful about it: Last year's fertility rate (the average number of children a woman will have in her lifetime) was 1.41 — a 16-year record high, but a far cry away from the 2.07 needed to just maintain population levels.

The nation's problem with sex goes back to the early 1980s, but it's becoming more of an issue in the context of the ongoing population decline. “A small portion of young people in Japan are sexually very, very active, while the vast majority are sexually repressed,” social psychologist Hiroyoshi Ishikawa said in 1983.

Satoru says that the number of women coming in for help with their sexless relationships "had almost doubled" in the past two to three years. More than half tell him they're not attracted to their partner anymore or that their sex life is "stuck in a rut."

A recent survey found that almost 37 percent of Japanese men have been celibate for the past three years, while 72 percent remain single.

"Remaining single was once the ultimate personal failure," Japanese-born assistant professor of anthropology at Montana State University Tomomi Yamaguchi said. "But more people are finding they prefer it."

For older generations in Japan, for whom matchmaking services were common, dating was seen as a means to marriage — something only to be undertaken when the endgame is a serious consideration. For young people, a series of conflicting standards exist: The 'ideal' woman is seen to be naive and "virginal" — even in a "sexually permissive" culture where casual sex among young people is frequent, but not, for girls, acceptable.

"Girls can't have flings without being judged," Eri Asada, 22, said."I gave up dating three years ago. I don't miss boyfriends or sex. I don't even like holding hands."

A March 2012 report published in the Japanese Journal of Population posits that "changes to traditional gender relationships have led to delays in marriages," but it could be that the changes in traditional relationships simply aren't changing quickly enough.

The head of Japan's official family planning association, Kunio Kitamura — the man who advises the government on all things sex — had an explanation why: "Sexual drive comes from males. Females do not experience the same levels of desire."

When Ando Miki, a champion figure skater, had a child out of wedlock earlier this year, a huge outcry ensued — especially when she announced she'd still be competing at the upcoming Olympics regardless. "I decided that I wanted to have a kid as a single woman, gave birth without complications to a baby girl in April and became a mother," Miki said.

Today, career-minded Japanese women face the double-challenge of to find a job in an economy just recovering from two decades of stagnation, while grappling with a generations-old stereotype about what it means to be a working woman.

The traditional idea that the purpose of marriage is to produce children also endures. After children are born, wives are expected stay at home with the children and take the most responsibility for doing domestic chores such as housework. According to the 2012 report, wives in their 20s and 30s spend the most time cleaning, while 20 percent of husbands don't help out at all — even when their wives work full-time.

That said, only 6.5 percent of women "completely agreed" that the traditional model of the husband bringing home the bacon while the wife "concentrates on housework" was ideal, and the vast majority — more than 80 percent — agreed that husbands should take the same amount of responsibility for child-raising and housework as their wives do.

Because the Japanese family structure traditionally revolves around the extended family, women in families often don't just have to care for their children, but also for older parents or in-laws as well. One in four wives lives with at least one of their or their husband's parents — a percentage that generally increases with age — and 70 percent of wives described their parents as their 'most important' source of support, while only 14.8 percent gave a shout out to their husbands. Respondents, however, were pretty split as to whether older parents living in with their children was really the best option.

The combination of caring for aging relatives and having children may be becoming less of an attractive lifestyle choice and more of an existence of "crushing obligation" for job-minded women — 71 percent of whom leave the workforce when their children are born for a lifestyle that's pretty much opposite of what they're used to.

For women, there's also a significant loss of independence that comes with married life: Almost 80 percent of women believed that "decisions on important family affairs should always be made by the husband."

"My Japanese guy friends are always surprised that I can “cook” or that I help do the laundry," Mike Wykoff wrote in to the Japan Times. "They always tell me, 'That’s your wife’s job.' Yeah, if you live in the 1950s."

Ayako Sono, a famous novelist, recently wrote that women should leave the workforce when they're pregnant — and it's for this reason that "it is understandable that companies cannot put women in positions of responsibility." Um.

Other cultural differences exist that could, from a young age, be discouraging young people from having sex.

The nation's first major push for sex education came during the 1990s as a response to the AIDS epidemic of the previous decade. Textbooks hurriedly introduced illustrated "mature human bodies" having sex. They were soon scrapped for sexing sea creatures — actual "copulating sea urchins." All in all, sex was made to look ugly and dirty.

Furthermore, ideas about equality in the bedroom haven't quite caught on, and studies about sex often focus on the men far more than women (join the club). The head of Japan's official family planning association, Kunio Kitamura — the man who advises the government on all things sex — had an explanation why: "Sexual drive comes from males. Females do not experience the same levels of desire." SAY WHAT?

But there is a glimmer of hope. One recent survey found that one of the biggest reasons why young Japanese remain single is that they're having trouble finding partners on their own. It's sort of like the perpetual New York City crisis: Everyone's single, but there's no one to date.

Here to save the day may be Japan's biggest social network, Mixi, which is looking to add a dating service to its site. Some critics say it's a way for a struggling social network to become relevant again by attracting users. Others say the idea might hold the key to reversing the nation's population decline. But in a society where arranged marriages were popular in the past and still aren't unheard of, the idea of connecting with strangers online could be controversial one.

"Simply providing dating services, however, goes against such traditional thinking and is not considered an acceptable business for a publicly listed company to be involved in," an article in Japan Times wrote.

But for a tech-minded nation, online dating might just be the golden ticket Japan needs to end this dry spell.