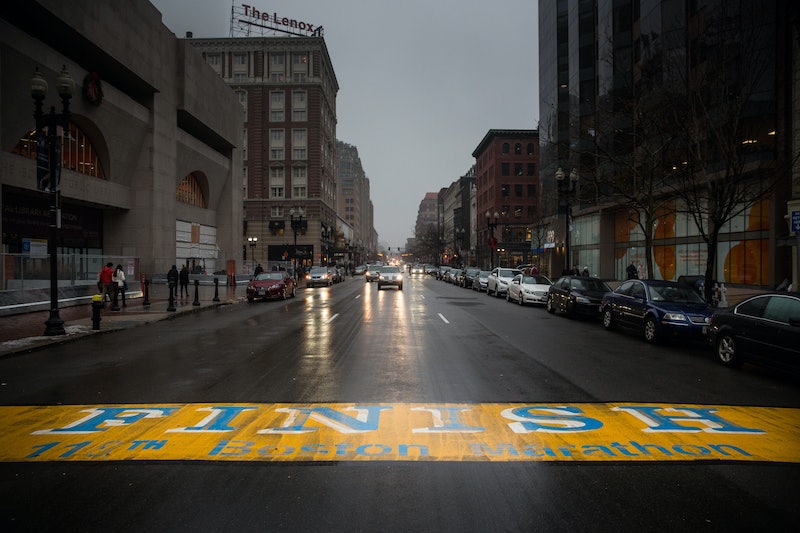 With the prosecution in the trial of accused Boston Marathon bomber Dzhokhar Tsarnaev preparing to rest its case, the defense will soon have its turn. And given how swiftly the prosecutors have moved through the often gruesome and disturbing evidence against Tsarnaev, the case might go to the jury pretty soon. Just how soon is a big question though: When will Tsarnaev's trial end?

According to the Los Angeles Times, the case could go to the jury in as early as two weeks. If that's how the trial proceeds, then in a strange twist, the verdict could be delivered very close to the date of this year's Boston Marathon, April 20. Tsarnaev faces 30 charges, including four counts of murder, for allegedly orchestrating and carrying out the bombing at the 2013 Boston Marathon, which injured more than 260 people, along with his brother Tamerlan. Even though Massachusetts does not have the death penalty, because he is being tried in federal court, Tsarnaev could face the death penalty if convicted.

Legal experts told the LA Times that the defense team has kept brief its cross-examinations of prosecution witnesses, which suggests it might want to move through the trial to get to the penalty phase. Tsarnaev's attorney Judy Clarke surprised the courtroom on the first day, when she said "It was him," The Boston Globe reported. The defense has sought throughout the trial to portray Tamerlan Tsarnaev, who was killed in a shootout with police, as the mastermind of the entire bombing, and show that the younger Tsarnaev was merely a pawn in his brother's plans.

But the prosecution has tried hard to counter the defense's image of Tsarnaev as a listless college student at the mercy of his older brother, and saved the more gruesome testimony until the end of each day, the LA Times noted. That way, the jurors leave for the day with those final images in their minds. The prosecution ended last week's testimony by medical examiner Jennifer Hammers, with descriptions of the injuries of bombing victim Krystle Campbell, who bled to death from severe injuries to her legs caused by the pressure-cooker bomb, the Globe reported. The defense did not cross-examine Hammers after her testimony visibly upset many jurors, according to the Globe.

Since the defense team is focused not on winning an acquittal, it is now trying to spare Tsarnaev's life, legal experts say, and Tsarnaev pleaded not guilty because he can appeal a conviction and sentence, the LA Times reported; death penalty appeals can drag on for years. The LA Times' legal experts note that if Tsarnaev gets a sentence of life in prison, it might put a close to a painful chapter in Boston's history more quickly than the lengthy appeals process that follows a death sentence.