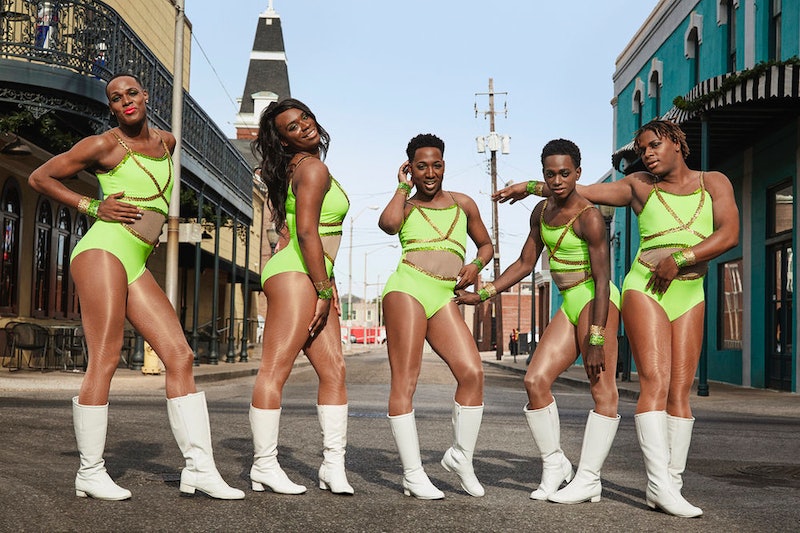 Viral video stars come and go, but every now and then an individual or group's talent propels them further than their 15 minutes. The Prancing Elites are one such Internet sensation. It was back in late 2013 when "Who are the Prancing Elites?" was the question on the Internet community's mind.

The unlikely dance troupe, comprising five black, gay, and gender non-conforming members from Mobile, Alabama, arrived -- nay, pranced -- on the scene after Shaquille O'Neal tweeted a video of the group performing a dance routine on the bleachers at a local basketball game. This tweet led to shares around the world; viewers reacted not only to the fun choreography and energy of the video, but also to the uniqueness of the group itself. Without saying a word, the media quickly elevated the group to the status of LGBT icons due to their tenacious confidence in the context of the conservative South.

These accidental activists were never out there to make a point, though. As they always say, they "just want to dance" and their dedication to their craft has led to the birth of their own television series on Oxygen, The Prancing Elites Project . To celebrate the debut of the show, Bustle and Oxygen have come together to tell you why these guys deserve your attention and encourage you to tune-in on Wednesday, April 22 at 10/9c to show your support.

Their Passion For Dance Keeps Them Focused

While the group's performances are perfectly synchronized, each member -- Kentrell Collins, Adrian Clemons, Jerel Maddox, Kareem Davis, and Timothy Smith -- comes from a unique background and joined the group at differing times. While they rose to fame in 2013, the group formed in 2004 shortly after the founding member, Kentrell Collins, discharged from the Army. (Yes, the Army.) Collins formed the group for people like him, who wanted to join the dance teams of their high schools but weren't allowed to audition due to their gender. Their love of dance -- particularly J-setting -- unified the team despite their very different personalities.

They Held J-Setting Down Before Beyonce

For those uninitiated to the art of J-Setting, it's a popular dance style in the Deep South that originated from the Jackson State University Prancing J-Settes. The sharp popping and synchronized steps quickly became popular in the South's mainstream and gained a dedicated following among LGBT fans. For those of you who are still unfamiliar with the style, its biggest claim to fame is inspiring the choreography in Beyonce's "Single Ladies" video.

They Haven't Let Fame Go To Their Heads

Not many people can say they have Shaquille O'Neal to thank for jumpstarting their fame, but the tweet above launched thousands of likes and shares and the group became instantly famous ... and sometimes, notorious. They were invited to more high-profile events, featured on news outlets, documentaries, and even appeared on "Tosh.0." Despite all of this, the group has remained humble and keeps its goals modest: mostly, they're interested in receiving spots in town parades and local sporting events. Even during their brightest time in the spotlight, the group relied on a Kickstarter campaign to raise enough money to purchase new shoes and rent studio space instead of practicing in parking lots at night.

They're Awesomely Brave In The Face Of Adversity

I used every negative comment and I turned it into something positive. -- Kentrell

Somewhat ironically, the group's Kickstarter wasn't successful until they experienced their most high-profile obstacle yet -- community reaction to their participation in the Semmes Christmas Parade. Prior to the parade controversy, the group had only received $500 from donors, but after nationwide coverage of the controversy, they exceeded their goal of $15,000 by $3,537 with over 500 backers. Despite their extremely humble goals of performing in local public events and being flexible (they've often offered to wear tracksuits instead of their signature hand-embellished leotards to join the MoonPie Over Mobile New Year's parade), they've still continued to face rejection. So what inspires them to keep going?

[You have to] not be too concerned about how other people are going to perceive you because of you accepting me and what I do. -- Adrian

[F]or every one negative comment, somebody else liked us. So you may turn us on to more new fans than you even know. The more you talk about us negatively, the more positive influence we make on other people. -- Kentrell

I mean I just keep myself motivated. And, you know, I pray a lot. So that's one big thing that helps me pass anything. -- Timothy

So don't be afraid to do what you love to do, because as long as you accept yourself your life will be a lot better. So don't just be afraid. -- Jerel

All we can say is that they've got moves.

This article is sponsored by Oxygen's The Prancing Elites Project . Be sure to tune in on Wednesday, April 22 at 10/9c.