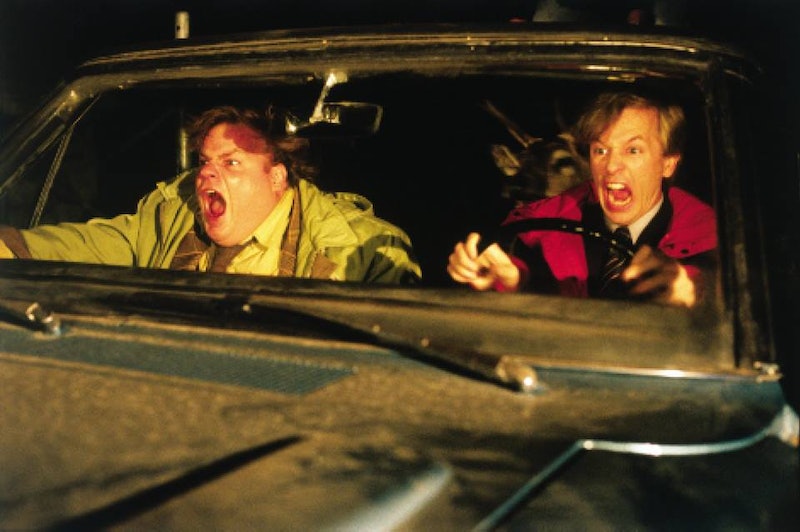 I don't know what it is about it, but whenever Tommy Boy is on TV, I have to stop and watch it. Perhaps its my soft spot for David Spade and Chris Farley, who were part of the "Bad Boys of Saturday Night Live" era in the early 90s. Or maybe it's because so many of the quotes and scenes from Tommy Boy are still relatable, even now celebrating its 20th anniversary. So many of the jokes still live on from the movie, especially "Fat Guy in a Little Coat," which actually originated as an in-joke from Farley and Spade's friendship.

Tommy Boy is like what would've happened after Van Wilder graduated from college. Tommy Callahan III (Farley) finally graduates from college after seven years and returns to his hometown in Ohio to work for his father Tom's auto parts plant. But when the elder Tom (Brian Dennehy) suddenly dies, Tommy embarks on a cross-country road trip with Tom's assistant Richard (Spade) in order to sell enough break pads to repay the company's debts. It's a true underdog story, because everyone — including Tom's con artist new wife (Bo Derek) and her fake son/lover (Rob Lowe) — believes Tommy is to much of an idiot to be able to make it happen.

But hey, he learned a lot during those seven years of college. Here are the enduring lessons, quotes, and memes for every occasion from Tommy Boy.

On the movie's anniversary, people are posting tribute pics of themselves in a little coat on Twitter under the hashtag #LittleCoat.

When You Need To Trust Your Instincts

Just take his word for it.

When You Don't Wanna Eat That

When You Were Just Insulted

When You Feel The Need To Prove Yourself

When You're So Excited To Hear From Someone

When You're Being Frank With A Colleague

Honesty and communication are key in the auto parts business.

When You Want To Show Off Your Speed

No better way to say it than Tommy-style.

When You're Totally Shocked

How did this one not catch on more?

When You Gotta Make Up a Historical Hero

Herbie Hancock is an unknown true American hero. And so is Tommy Boy himself.

More like this
At 28, Lesley Manville Was Acting, Picketing, & Singing Kate Bush Songs
By Olivia-Anne Cleary
Reese Witherspoon Gave Fans Hope For 'Legally Blonde 3' After This Surprising Movie Inspired Her
By Jake Viswanath
22 Movies On Netflix That Are Perfect For The Whole Family
By Bustle Editors
Jennifer Coolidge Needs 'Legally Blonde 3' To Happen So She Stops Getting Hot Dog Jokes
By Jake Viswanath
Get Even More From Bustle — Sign Up For The Newsletter