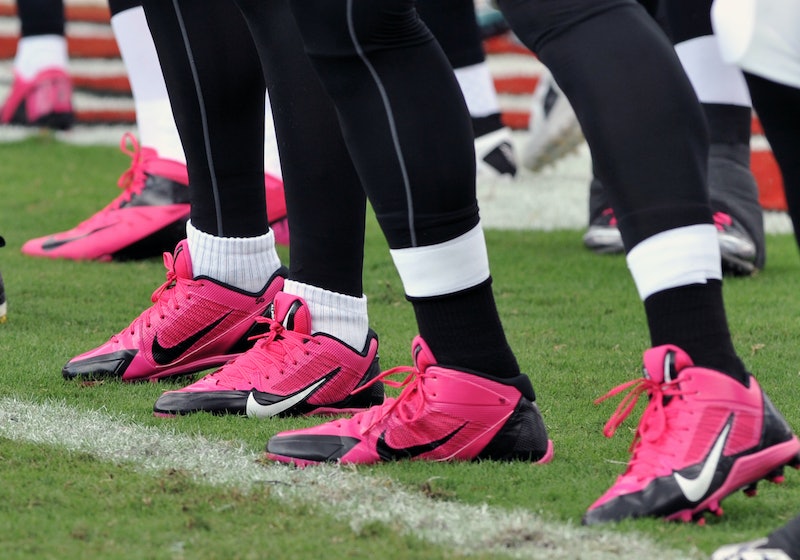 “Join us in the fight against breast cancer. Text NFLPINK to 41518 to donate $10 to the American Cancer Society,” a message on the NFL campaign’s homepage reads. A warm, fuzzy way to support America’s second-favorite pastime, AND to help women, right? Not quite. There’s yet another scandal in the war on breast cancer: the NFL has, apparently, been pocketing a large chunk of cash raised through its “A Crucial Catch” campaign.

Throughout October, NFL teams have been setting aside their macho cred to put on pink cleats and gloves, and have even used footballs emblazoned with the infamous pink ribbon. And it’s selling this stuff, too: on its online shop, you can buy an official breast cancer awareness football for $139.95, a pink women’s jersey for $94.95, or even a decal of a pink ribbon and a team logo for a bargain $3.95. This wouldn’t be so bad – in fact, it might even be great! – if your money was actually going to fight cancer.

Since my math requirement in college was satisfied with Introduction to Archaeological Methods, I can’t do the math for you. But the smart, numbers-savvy folks at Business Insider say that “only 8.01 percent of money spent on pink NFL merchandise is actually going towards cancer research.” (Just over 11 percent goes to the American Cancer Society overall – but like any good member of the non-profit industrial complex, they’ve got a large staff and many administrative costs.)

It boils down to this: if you buy $100 of pink gear to support cancer, $37 will go right back to the manufacturer. Then, the NFL will automatically take out another $1.25 for itself. Fifty dollars will then go to the retailer (also the NFL, if you buy online), leaving $11.25 for the ACS.

Let’s not forget that the ACS is not entirely efficient with its resources, either. Just 71.2 percent of its funds go to “program expenses” — what that means is anyone’s guess, and how that breaks down specifically within its breast cancer programs is even murkier. (Plus, they’ve got to shell out more than $2 million to pay CEO John Seffrin.) So really, the answer is that at best just eight of your hundred bucks are going to something related to providing services or research or education about breast cancer. At best.

So where should you donate your money to support the cause? Here are how the cancer — specifically, breast cancer — charities break down: The Dana-Farber Cancer Institute gets a 64.93 (out of 70) rating from non-profit screener CharityNavigator.org, and Susan G. Komen for the Cure gets a 62.54 (although for financial allocations, it gets a lower 59.89). Living Beyond Breast Cancer gets the highest score by far: an overall 68.96, and a perfect score for accountability and transparency. The American Cancer Society, meanwhile, gets just a 46.75, which earns it two stars compared to the full four the other charities got. And on the rating of its financial allocations, the ACS got a mere 37.26: a one star score.

And all of that, mind you, is setting aside the moral implications of using a game like football to fight one debilitating disease amidst increasing evidence that the game causes another. Every tackle in those pink cleats is probably causing irreparable damage to the players' brains, bringing them one step closer to an incurable illness that leeches their memory and puts them at a much higher risk of suicide. Painting them as warriors for the pink crusade masks the fight they should be fighting for themselves. (I think that should matter, but that’s just me.)

A partnership like this – which the ACS says helps get the issue of breast cancer a lot of exposure — is part of what Peggy Orenstein termed “pinkwashing” in her fantastic takedown of the feel-good breast cancer campaigns in April.

“It offers corporations a seemingly fail-safe way to signal good will toward women,” Orenstein wrote in the New York Times Magazine. “Having football teams don rose-colored cleats, for instance, can counteract bad press over how the N.F.L. handles accusations against players of rape or domestic violence.” Orenstein’s compelling piece also discredits the “early detection saves lives” approach, which is still touted on the NFL’s page.

Despite the fact that Komen trademarked the phrase 'for the cure,' only 16 percent of the $472 million raised in 2011, the most recent year for which financial reports are available, went toward research. At $75 million, that’s still enough to give credence to the claim that Komen has been involved in every major breast-cancer breakthrough for the past 29 years. Still, the sum is dwarfed by the $231 million the foundation spent on education and screening.

We couldn't find similar breakdowns for spending by the American Cancer Society.

The worst part is that this isn’t the first time we’ve learned that a costly, showy awareness campaign is at best inefficient and at worst, wasteful. The Red campaign — an earlier popular initiative to raise awareness about and money for fighting HIV/AIDS in Africa — was one such spectacular failure: it raised only a fraction of the millions of dollars it cost to set up. Money used to popularize the campaign could have easily been donated directly to the cause. In 2007, an activist named Mark Rosenman said that the campaign, “benefits the for-profit partners much more.” Because you know, that’s how charity is supposed to work.

So really, it’s hard to feel like the outrage against the NFL isn’t a bit misplaced. They shouldn’t feel shame for looking for a partnership that would raise their public profile while doing a little bit of good on the side. The moral dilemma comes in when the most reputable non-profits in the country participate in a scheme that so blatantly misinforms donors.