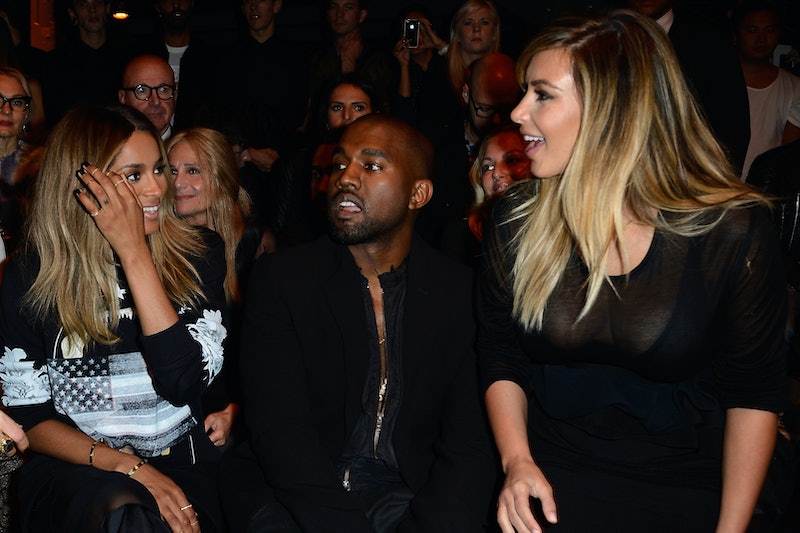 Back when Kanye West made his debut appearance on Keeping Up with the Kardashians, he threw out all of Kim's clothes and bought her a brand-new "dope shit" wardrobe. And today, on her 33rd birthday, Kardashian is again revealing just how much she lets West dictate her duds. In fact, he's so in charge of her looks, Kardashian dresses for Kanye: "You want your guy to think you're really hot. I'll put something on and he'll [Kanye] say, 'No, that doesn't look good', and I'll trust him."

Oh, Kimmy! While she might look great in the clothes that West picks for her, the fact that she is so docile and open to his control is... sad. And strange. Much like their entire relationship, to be honest.

To boot, Kardashian told the London Sunday Times Style that she hasn't had time to lose weight because, you know, she has a baby that she's trying to take care of. "I haven't exercised a whole lot so far, just because I've been busy with the baby and I don't want to leave her. I still have some [baby weight] to go," she says, adding that the Atkins Diet has been a godsend. "Atkins worked for me and I don't feel tempted to eat a bunch of junk food. It's just about staying healthy - it will come off."

What's going on with Kardashian? The reality star has always been a mystery to me, seemingly absorbing whatever personality of the dude she's with. (Remember how boring she was with the undeniably dull Kris Humphries? No wonder they broke up — the relationship was hardly good for television.) But admitting that she will wear whatever West wants her to is so... Victorian and controlling and a little morbid.

Look, say what you will about Kardashian's past, but there's no denying she's a self-made woman. Which makes it all the more confusing to see her acting like a Stepford wife with extremely low-cut dresses. Obviously, we shouldn't be dictating how Kardashian should behave, and if dressing for her man makes her happy, more power to her. But I wish she would express some sort of her own volition to choose what she wears, at the very least. If Kanye is that controlling about her image and her wardrobe, what else is he gonna tell her to do?