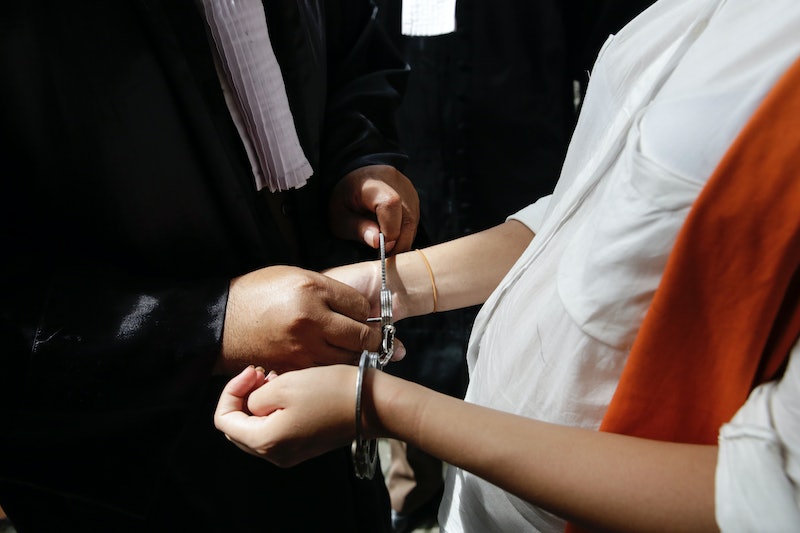 In July 2013, Purvi Patel experienced a sudden loss of pregnancy in the home she shares with her parents in Granger, Indiana. By Patel's account, the 23-week-old fetus was dead when it came out of her body — a stillbirth. But on Monday, Patel was sentenced to 20 years in prison on contradictory charges of feticide and felony neglect of a dependent. She is the first woman in the United States to be convicted and sentenced for allegedly ending her own pregnancy.

Patel was initially sentenced to 30 years in prison for neglect of a child, and six years for feticide (the intentional killing of a fetus in utero) to be served concurrently. She will spend 20 years in prison, and an additional five years on probation — all for allegedly terminating her own pregnancy, a claim that was not proven in court.

However, prosecutors contended Patel attempted a self-abortion, birthed a live infant, then placed it in a Dumpster to die. Judge Elizabeth Hurley reportedly told the 33-year-old Indiana woman as she awaited her sentence Monday morning:

You took away any possibility that this baby could have survived, and cemented that fact that no one was going to find him alive. The crux of this case, in my opinion really lies in the choices you made after you delivered the baby.

But whether Patel delivered a live infant or had a miscarriage and spontaneously expelled a non-viable fetus is still up for debate, making this whole trial and decades-long sentence a frightening precedent for reproductive justice advocates in Indiana and beyond. Although 38 states currently have feticide (or "fetal harm") laws on the books, they historically haven't applied to women who have endured miscarriages, stillbirths or abortions. Now, advocates worry these laws will be used as a way to criminalize abortion without eradicating Roe v. Wade. Scarier, still, is the prospect that women may now be thrown in jail for having a miscarriage or stillbirth.

According to court documents, Patel arrived at St. Joseph Hospital with severe bleeding. Seemingly in shock, she at first denied having been pregnant, but eventually told doctors she suffered a miscarriage at home. Patel told doctors she thought she was only about two months pregnant, and that the fetus wasn't breathing or moving when it was expelled from her body.

Although Patel was more than two months pregnant, the age of the fetus was disputed among doctors. An affidavit states that a forensic pathologist who examined the fetus shortly after its discovery concluded it was at least 28 weeks old. However, a doctor testified for the defense last month that the fetus was around 23 weeks old, and so it was never viable. Throughout the trial, other doctors testifying on behalf of the prosecution also couldn't determine the exact age of the fetus.

Also disputed was whether or not Patel actually took abortion-inducing drugs to terminate the pregnancy. Court documents cited text messages she had sent to a friend about a month before the pregnancy loss, stating that she was going to order abortion-inducing drugs online from Hong Kong. However, the prosecution couldn't prove that she actually ordered and took these drugs.

"What the state is attempting to do is to use a text message … which says nothing," defense attorney Jeff Sanford said at the time. "If they had something to connect her — some document, anything to show she received the drugs, that’s fine. But I don’t think they do.”

The toxicologists who screened Patel's blood work following the stillbirth also testified that he found no evidence of such abortion-inducing drugs in her system. Yet the prosecution asserted that Patel deliberately terminated her pregnancy with these illegally purchased drugs and left a live infant to die.

On Monday, Judge Hurley accused Patel of treating her "child literally as a piece of trash" and chastised her for "[taking] matters into her own hands." Although feticide and neglect are contradictory charges, Judge Hurley said it was essentially the same action for Patel.

Reproductive justice advocates, however, believe this trial was a witch hunt, with the state intent on criminalizing Patel for a stillbirth as a new way to vilify pregnant women.

"While no woman should face criminal charges for having an abortion or experiencing a pregnancy loss, the cruel length of this sentence confirms that feticide and other measures promoted by anti-abortion organizations are intended to punish, not protect, women," National Advocates for Pregnant Women Executive Director Lynn Paltrow said Monday in a statement.

UPDATE: In a statement, the Indiana Religious Coalition for Reproductive Choice tells Bustle: "It is incomprehensible that Purvi Patel is facing 20 years in prison for neglect of (in the prosecution's language) a premature baby "seconds to minutes of age" born outside a hospital. Mr. Rule said "she left him to die on the floor." But no one seemed to appreciate that during those seconds, she herself was bleeding out on the floor ... The sentence for feticide demonstrates that the application of the feticide statute in Indiana is being expanded to criminalize obstetric emergencies, unhealthy behavior, and self-abortion with online or alternative abortifacients."