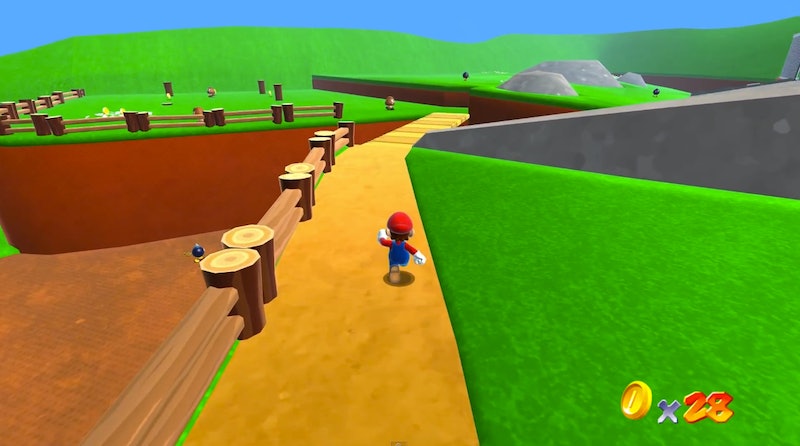 Ready for a blast from the past? Super Mario 64 has received a major makeover thanks to the efforts of YouTube user Eric Ross. The computer science student has created an HD version of Super Mario 64 (in particular, the iconic first level) on the cusp of its 20-year anniversary. (Feel old yet?) Since the Wii U, Nintendo's only HD gaming console, was released in just 2012, there haven't been many Nintendo games released in HD. This fan-made video is our first glimpse at what an HD version of Super Mario 64 might look like — and the best part is, it is playable on your computer as long as you have the Unity plug-in!

I'm going to be perfectly honest: I was a little skeptical when I heard there was an HD video of Super Mario 64. A large part of Super Mario's nostalgic-inducing charm is its hokey graphics and its generous distance away from the uncanny valley. Some might consider it sacrilegious to mess with such an iconic episode, but I found it to be a very pleasant surprise. The graphics looked clean and crisp, but they still maintain the colorful quirkiness we all love about the Mario world.

Well, this would certainly gets two thumbs up from me. The game was created using Unity, a great programming language for beginning developers. Hopefully Super Mario 64 in HD will be a nice distraction while many of us eagerly await the release of Zelda in HD for Wii U.

Make sure you change your viewing settings to HD before you watch the video!

For the sake of comparison, here are glimpses at the 480i and 480p graphics for Super Mario 64 on N64 and Wii respectively.