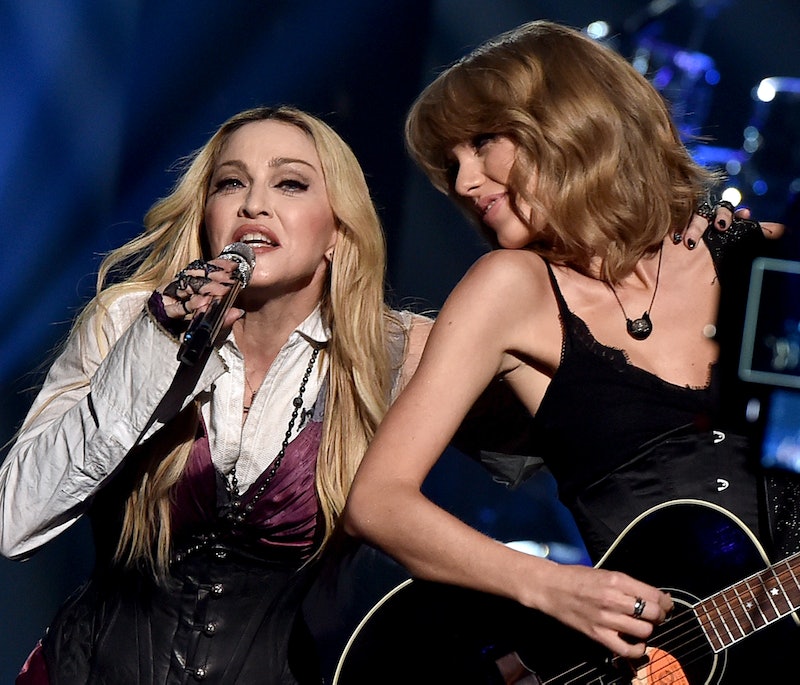 Last night Taylor Swift stole the show at the 2015 iHeart Radio Music Awards. Not only did she win some big awards last night (including artist of the year and song of the year for "Shake It Off") she also caused an Internet frenzy when she and Justin Timberlake had a surprised face face-off after she won the award for best lyrics for "Blank Space," making fans everywhere even more jealous of their friendship. The biggest surprise of the night though came when Taylor Swift joined none other than the Queen of Pop herself, Madonna, on stage for a special performance of her new single "Ghost Town."

Even though she fangirled over Madonna's praise a few months ago, for this performance, Taylor managed to stay perfectly calm and collected as she played guitar for one of the biggest pop legends of all time (NBD!). But of course, this isn't Taylor's first rodeo when it comes to celebrity guest performances. Not only does the girl have a way of making a surprise appearance, she also has a way of making a surprise performance. Over the years, (especially during her Red Tour) Taylor Swift has performed with a number of great artists. Check out a few of her greatest celebrity guest performances here.

When Taylor performed at the Staples Center in LA for her RED Tour, you best believe she had an incredible list of guest performers.

Before all the rumors between this British gal and Ed Sheeran, Taylor had Ellie join her on stage for her RED tour.

Yet another RED special guest performance, Taylor and Sara pushed everyone in the audience to be "brave."

Singing what Taylor calls her "hairbrush song," these two artists rocked out to one of the biggest songs of the 00s.

Carly Simon made writing songs about famous exes a thing way before Taylor was even born, so seeing them sing that iconic song together on stage is even that much more incredible.

Way before all that, "bad blood," these two former friends looked really cute as they sang along to Katy's hit single.

Taylor shows off her rapping skills as the "Super Bass" singer joined her on stage.

Back when Bieber was still a "baby" Taylor had him join her on stage for this special performance that made all the little girls in the audience go crazy.

This was the first time Taylor shared the stage with her BFF, signing Selena's inspiring hit, "Who Says."