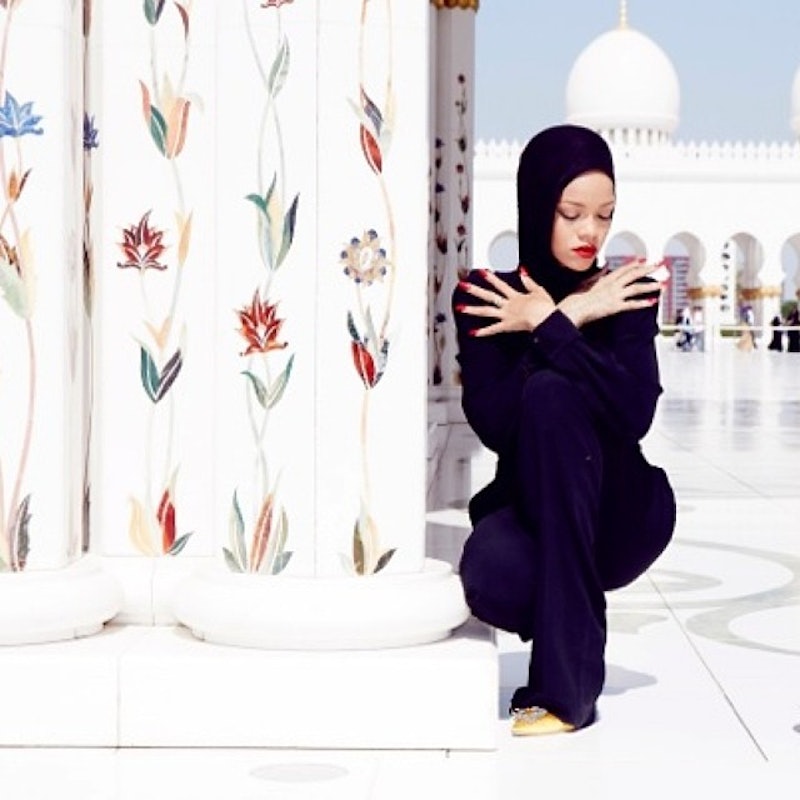 Rihanna was ousted from an Abu Dhabi mosque for using the location as a backdrop for some photos that she posted to her Instagram. Visiting the Sheikh Zayed Grand Mosque during her Diamonds World Tour, Rihanna opted for a "conservative" outfit — a form-fitting black jumpsuit and a hijab — in which to pose for photos. Authorities at the mosque said that Rihanna was in areas "typically off-limits to visitors and that her fashion-style shoot didn't support the 'status and sanctity of the mosque.'" Hey Rihanna — a mosque is not your own personal playground; it's a place of worship and a cornerstone of an entire religion. Maybe you should be more aware.

Riri has always been a controversial figure, largely in part because she's so outspoken about her sexuality in her interviews, lyrics, and wardrobe. And that's totally cool. I actually think she's pretty badass in her brazen defiance of demureness. Yes, a lot of pop stars are hyper-sexualized, but Rihanna's sexuality is different somehow — her boldness is fiercely independent, which I can respect. But cultural insensitivity and misappropriation are not edgy, they are disrespectful and ignorant. Often it seems that pop stars conflate what is edgy with what is actually offensive, and in this case, Rihanna has crossed a line.

One of the several photos that Rihanna posted on her Instagram from her sexy mosque romp shows Rihanna posing with her hands on her hips, a group of Muslim women in the background, and the caption reads: "Bitch stole my look." WOOF. It's one thing to misinterpret the meaning of the hijab, but it's another to mock an entire culture AND claim it as your own. It's misappropriation at its worst. Though Rihanna was told to leave the mosque, she still has the photos posted on her Instagram, upon which many fans are expressing their disappointment and disapproval.

To say that the Western world does not understand the hijab is an understatement — Rihanna's sexualization of the garment is reminiscent of Lady Gaga's recent total misappropriation with the leak of her song "Burqa" (which she recently renamed "Aura"). When the song leaked earlier this year, the lyrics and her accompanying performance in a transparent pink burqa with visible lingerie underneath were so grossly offensive that Gaga changed the title of the song. But that's a minimal offering — the lyrics of the song remain the same: "Do you want to see me naked, lover? Do you want to peek underneath the cover?" At Policy Mic, Mariam Elba wrote in response to "Burqa:"

This applies, too, to Rihanna's Instagram photos — fans who support her are calling the photos beautiful, but if they were of a Muslim woman in a burqa at the mosque, I'm sure that Western women would be clamoring about how sad it is that Muslim women are forced to cover up their bodies. This idea of Muslim women not possessing any agency is constantly negated by actual Muslim women, like Areej Elahi-Siddiqui at Policy Mic in response to FEMEN's horrible "naked" burqa demonstrations:

In an effort to afford women choice, they’ve made it seem like all women who wear the hijab are oppressed and that simply is not the case. Rather than singling out governments who wrongfully enforce modest dress codes and hijabs as they should have, they have made it seem like this is a global problem and any woman who chooses to cover her head or her body isn’t actually doing it by choice, but is being forced to.

Rihanna is playing into this cultural tourism. The hijab is suddenly beautiful and acceptable on an internationally renowned pop star — it's not longer foreign, no longer incites xenophobia. Rihanna should remove the photos from her Instagram and honor her Muslim fans who were deeply offended by them; she is romping around a sacred place, but because it is not sacred to her or her American fans, it's just another set-piece for Instagram likes.

She's not being edgy, she's contributing to an already rampant misunderstanding of Islam and encouraging its misappropriation. That's more than "Rude Girl" behavior — it's othering, offensive, and unacceptable.