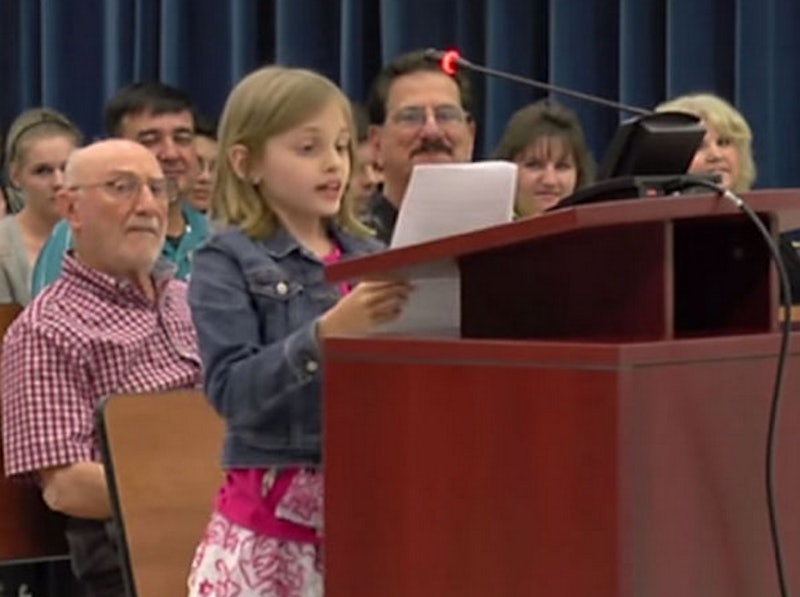 Meet your new role model: Her name is Sydney Smoot and she is nine years old, and she is a total rock star. The fourth grader recently made an impassioned speech in front of the Hernando County School Board in Florida to protest the overreliance of standardized testing in Florida elementary schools. She targets the Florida Standards Assessments (FSA), a series of statewide tests for students in kindergarten through 12th grade. She begins:

I consider myself a well-educated young lady. However, with FSA tests, my five years of school - all on honor roll - do not matter. This test looks at me as a number. One test defines me either a failure or a success through a numbered rubric. […] I do not feel that all this FSA testing is accurate to tell how successful I am. It doesn’t take an account of all my knowledge and abilities, just a small percentage.

Smoot may be speaking specifically of the FSA tests, but schools across the country are grappling with a surge in standardized testing. These exams are aimed at holding schools accountable for student education, but often they end up taking valuable time and resources away from teaching tailored to the needs of individual students. Florida’s standardized testing made headlines last year when veteran kindergarten teacher Susan Bowles published a letter explaining her refusal to administer the Florida Assessments for Instruction in Reading (FAIR) test. She argued that this exam, along with a number of other required standardized tests, effectively overwhelmed her ability to actually teach her students.

Why are we taking most of the year stressing and prepping for ONE TEST at the end of the year, when we should be taking tests throughout the year that really measure our abilities….The stress and pressure this testing puts on me, and I’m sure most students, is not healthy.

Smoot becomes progressively more confident and animated as the speech goes on, boldly holding out her hand to say “I urge you to put a STOP to high stakes testing today!” At the end, the members of the audience rise to their feet, cheering and clapping, and, OK, maybe I got a little misty-eyed at this point. WHATEVER.

Check out her full speech: