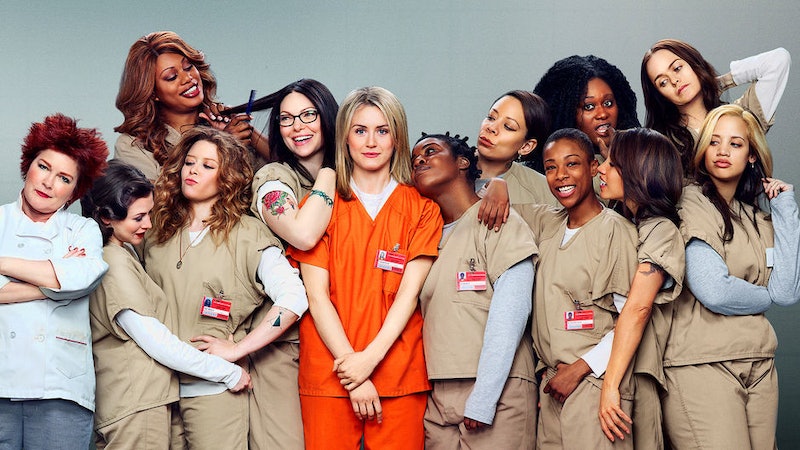 There are few fans of Orange is the New Black who were outraged to find out that Jason Biggs' character Larry Bloom will not be returning for OITNB Season 3. Did he help develop Piper's storyline and give greater emotional stakes to her situation at the start? Absolutely. Did we have to sit through way too much of his storyline instead of focusing on the inmates with more fascinating narratives? Oh, you better believe it. When we last left Larry Bloom, he was (figuratively) riding off into the sunset with Piper's best friend Polly, along with her child from her still currently legally-binding marriage. And let's not forget that time he used Piper's situation to bump his own journalism "career." Sayanora, Larry. Don't let the bars hit you on the way out.

So now that the writers have a lot more space in the scripts, there are oodles of characters and storylines that deserve more attention. In fact, in the first two seasons it was the history of the minor characters that were the most compelling. Poussey Washington's episode was absolutely heartbreaking, and the truth as to why Gloria Mendoza landed in prison showed just how flawed the criminal justice system can be. When Orange is the New Black digs deep, it breaks open so many realities and lived experiences of those not often portrayed in popular media.

(SPOILERS AHEAD) Since we can already guess that plenty of Season 3 will focus on the post-Yvonne era and the fall out from THAT "accident," let's take a look at some characters and stories that often fly under the radar and deserve more time in Season 3.

Though her character is more than a little annoying, she hasn't been given enough of the spotlight to really make us care about her yet. Yoga Jones fell into a similar category with her hippie-dippy mantras, but, when she finally opened up about how she landed in Litchfield, well, holy crap. Brook deserves to have her story told so maybe we can understand and empathize with her a little better.

The elder women of Orange is the New Black often discuss how they are overlooked by the world, and sometimes that includes the plot. Jane Ingalls was given a backstory episode with her history as a once semi-famous nun. However, it was the episode in which Jimmy Cavanaugh was hauled off and released without proper care that shined the most light on how important these women's stories are. I want to know what happened to Claudette after being sent to Maximum Security and who Norma is behind her deceivingly sheepish ways.

We still don't know exactly how she landed in prison. It's about time that we do.

Where Did Susan Fischer Go?

Susan Fischer was the most human of the Litchfield guards. Her leaving was a real kick to the gut. I hope we find out she's somewhere in which she's really valued. Call me a softie, go ahead!

Sophia talks about her transition all of the time, and we see glimpses of the before and after — especially focusing on its effects in her personal life. The further Orange is the New Black can go into showing her journey, the more groundbreaking the show will be and the more understanding it can spread. Also, who doesn't want more Laverne Cox?

More like this
Who Could Die In The Stranger Things Season 4 Finale?
By Kadin Burnett
Only Murders In The Building Introduces 4 Suspicious New Characters In Season 2
By Kadin Burnett
Adele’s All-Female Lineup Includes Kacey Musgraves, Mahalia, & Self Esteem
By Shahed Ezaydi
What Is the Net Worth Of Each 'Stranger Things' Season 4 Cast Member?
By Hugh McIntyre
Get Even More From Bustle — Sign Up For The Newsletter